After a ruckus week, which included US NFP and rate hikes from the Fed, BoE, and ECB, the markets may begin to calm a bit as they digest the latest economic data and monetary policy actions.  There is only one major central bank meeting on tap this week and it’s the RBA. Markets are looking for a 25bps rate hike, but as with the other central banks, the focus to be on the statement (at the end of the week).  In addition, markets will still be drawing conclusions from the big tech releases last week which included Meta, Amazon, Google, and Apple.  Economic data slows this week, as China will release its inflation data and the UK will release Q4 2022 GDP at the end of the week.

On Friday, the US released its monthly Non-Farm Payroll report.  According to the release, the US added 517,000 new jobs to the economy in January. Expectations for only for an additional 185,000 jobs to have been added.  Economists warned earlier in the week that there could be a large discrepancy between the expected and the actual print due to a change in the methodology of calculating the number, but not this large.  Even if one took 200,000 jobs off of the print, it would still be an exceptional beat!  In addition, December’s print was revised to 260,000 from 223,000 and the Unemployment Rate dropped to 3.4%, the lowest since 1969!  The Average Hourly Earnings of 0.3% MoM will make the Fed smile, as it was in-line with estimates and lower than Decembers 0.4% MoM print.

What are Non-farm Payrolls?

The FOMC, BoE, and ECB all met last week at their respective interest rate decision meetings.  All hiked rates by the expected amount: FOMC 25bps, BoE 50bps, and ECB 50bps.  The FOMC stopped short of saying that it was going to hike an additional 25bps in March and the statement repeated that “ongoing” rate increases will be appropriate. However, Fed Chairman Powell said in the press conference that it’s safe to say that the disinflationary process has started.  He also danced his way around a question as to whether the Committee would pause its rate hikes, as did the BoC.  The takeaway was less hawkish.  (Powell will speak on Tuesday.  Watch for any clarifying comments regarding the FOMC meeting).  The BoE changed wording in its statement to say that “if” there are more price pressures, “then” further tightening will be required.  BoE Governor Bailey noted in his press conference that “we have seen a turning of the corner”, however added that there are still inflation pressures.  The Committee also downgraded its inflation forecasts to 4% for 2023 and 1.5% for 2024.  The takeaway was neutral. The ECB committed to hiking an additional 50bps in March and said that interest rates would be determined on a meeting-by-meeting basis moving forward.  However, the statement also said that rates still have to rise significantly higher. In her press conference, ECB President Christine Lagarde seemed to mince words, but in the end noted that “We haven’t reached a peak in rates, we have ground to cover” and “We know we are not done yet.”  Although the ECB sounded the most hawkish of the three central banks, the takeaway was less hawkish.

The Reserve Bank of Australia meets on Tuesday this week at its interest rate decision meeting.  Prior to the Q4 and the December inflation reports, markets were expecting a rate hike of 15bps, to bring the overnight rate to 3.25%.  However, the Q4 inflation print was 7.8% YoY vs an expectation of 7.5% YoY and a Q3 reading of 7.3% YoY.  The December monthly CPI indicator was 8.4% YoY vs an expectation of only 7.6% YoY and a November reading of 7.3% YoY.  Therefore, inflation rose dramatically in December.  Markets are now looking for an interest rate increase of 25bps. The RBA Statement on Monetary Policy won’t be released until Friday, but traders will be focused on anything the Committee has to say about the end of the zero-tolerance covid policy in China and how it expects the reopening to affect the Australian economy.

See how professional traders are positioned across forex and commodity markets with our weekly Commitment of Traders (COT) report - updated every Monday!

Last week was a huge week for big tech earnings releases.  Facebook parent Meta beat estimates and announced a stock buyback that sent prices higher.    However, Amazon, Google and Apple didn’t fare as well. Amazon’s growth prospects have deteriorated, and its profits could be vulnerable as a result.  Alphabet delivered its slowest sales growth ever as advertisers and cloud computing clients reduce their spending. Apple sales fell for the first time in three years and missed expectations for the first time since 2016.  Earnings season is over the hump as far as big names are concerned, but there are still more to come. This week features BP, Disney and Paypal.  For a complete look at this week’s earnings, see my colleague Josh Warner’s preview here.  Other earnings due to be released this week are as follows:  AMGN, L, BP, SNEX, PINS, DIS, CVS, UBER, PEP, LYFT, ABBV, AZN, PEP, PYPL 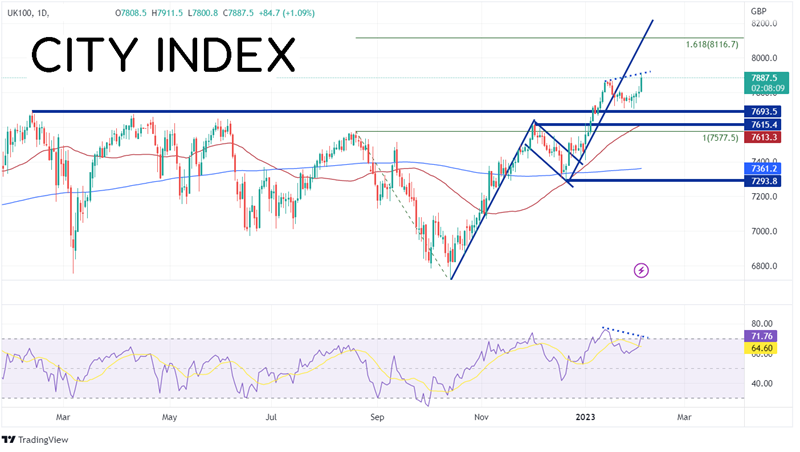 With fallout from last week’s events, along with the RBA, markets may continue to be volatile this week.  The FOMC, BoE, and ECB all showed their hands last week.  Now the RBA will do the same.  Will the Aussie sell off after the announcement as did the currencies of the other central banks which met last week?  Manage positions accordingly.

Have a great weekend!

Is gold set for a ‘sympathy bounce’ towards 1900?
By:
Matt Simpson

Powell continues to be “less hawkish” in Economic Club conversation
By: