New Zealand’s inflation came in much hotter than expected [hoped] 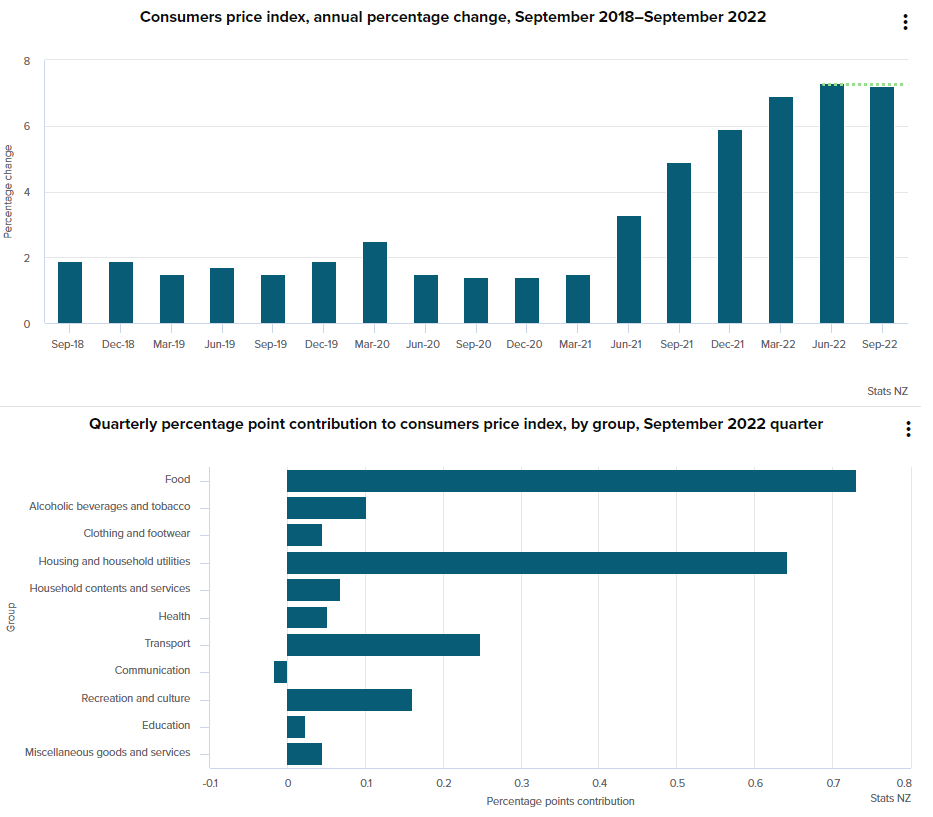 I think we can stop saying inflation is “hotter than expected” and shift to “hotter than hoped” – because it really does feel like we’re all just crossing our fingers and hoping prices come down. And in the few cases that they are, it is clearly not fast enough for anyone’s liking. Conversely to the adage about stock market prices, inflation seems to get the elevator up and the escalator down – but not before lingering around the top floor for an extended period of time.

RBNZ hiked for an eight consecutive meeting earlier this month to 3.5%. It was also their fifth consecutive 50bp hike and a 75bp was considered. And with inflation not behaving itself, perhaps the RBNZ will have to hike by 75bp after all and take what comes of it. That said, Governor Orr has described the current tightening cycle as “very mature” and the most recent OCR projection from the central bank is 3.69 (call it 3.7%) by December 2022. 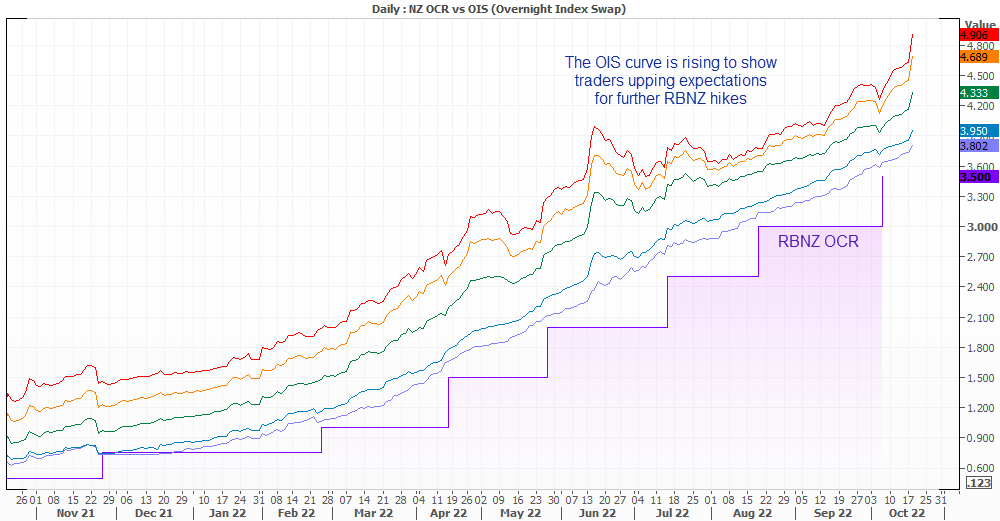 OIS (overnight index swaps) are shooting higher across the curve as traders bet on the potential for a more aggressive tightening cycle. A 25bp is fully prices in for the November meeting, but a 50bp seems more likely than a 50bp anyway – and, as mentioned above, a 75bp is not out of the question. 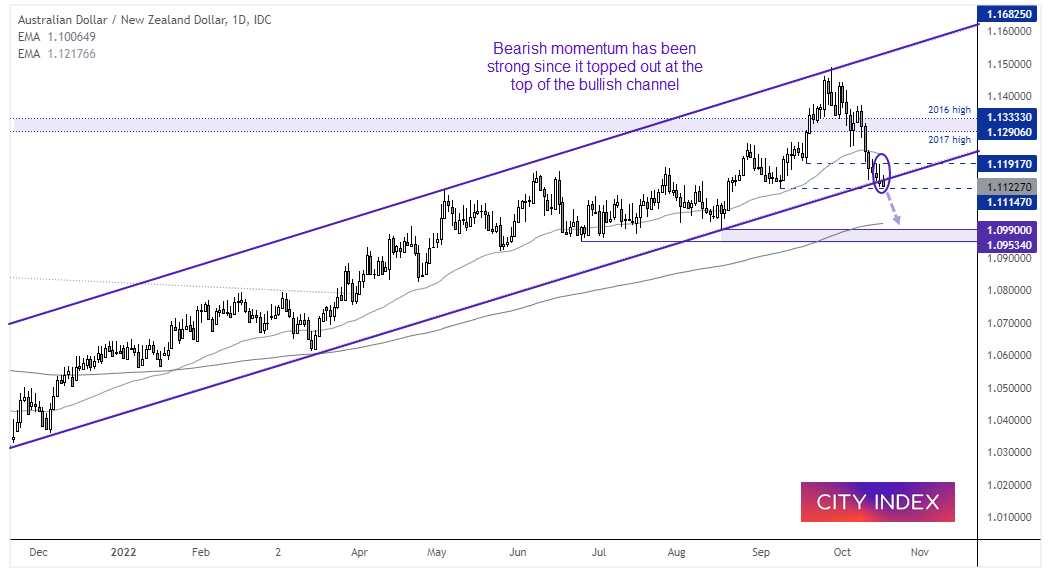 AUD/NZD has fully traced the width of the bullish trend channel. And given it has occurred within a relatively straight line, I currently anticipated it will break lower. A minor attempt to do so has occurred following the CPI report, but we also have the Assistant RBA governor speaking and RBA minutes released within the hour to be aware of. From here I am looking for a break below 1.1110 to assume bearish continuation, whereas a break above 1.1200 assumes a deeper correction before the break anticipated break lower. 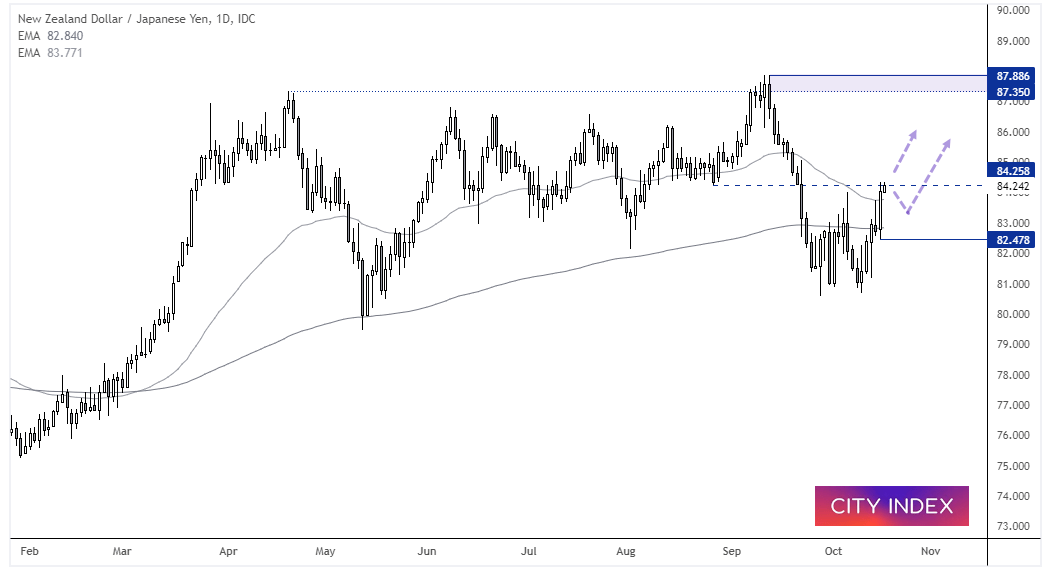 The broadly weaker yen ahs helped NZD/JPY rise to an 18-day high and test a pivotal level around 84.30. Should equities manage to extend their rally due to less-worse-than-expected earnings, risk pairs such as NZD/JPY could also benefit further. For now we’re looking for a direct break higher, but if prices pullback first then bulls could seek evidence of a swing low above 83.00. 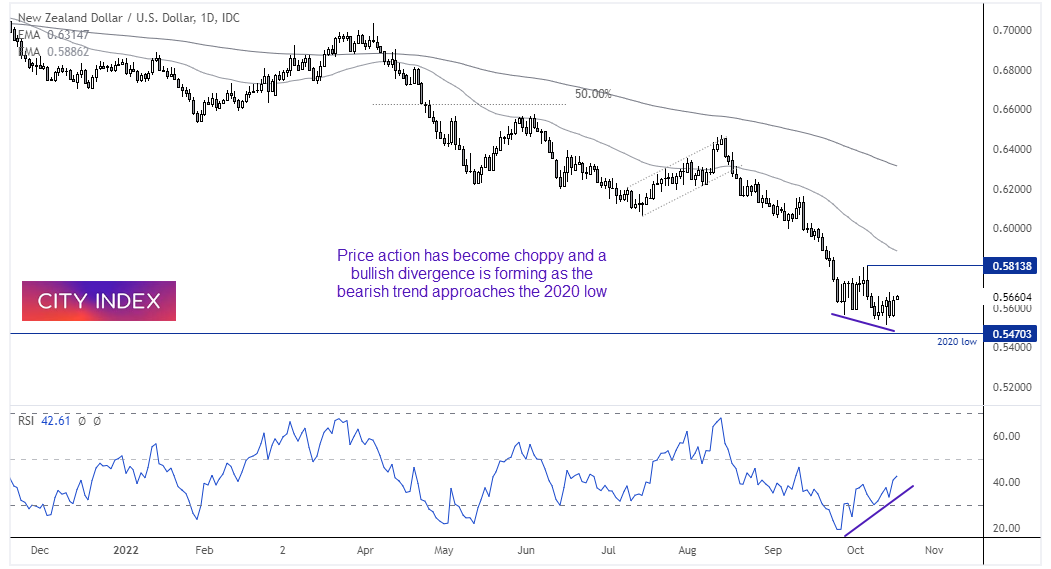 NZD/USD clearly remains within a downtrend but it should be noted how price action has become choppy, and a bullish divergence is forming on the RSI as the trend approaches the 2020 low. And as noted in yesterday’s COT report there are some signs of a potential sentiment extreme for NZD bears – at least over the near-term.