Mexico CPI due out tomorrow, but does it matter?

Mexico will be one of the first countries to release its September CPI data on Friday.  Expectations are for a print of 8.75% YoY vs 8.7% YoY prior. This would be the highest inflation reading since December 2000.  In addition, the Core CPI rate for September is expected to increase to 8.34% YoY vs 8.05% YoY for August.  This would also be the highest level since 2000.  However, does it matter to the Bank of Mexico (Banxico) what the print is?  Banxico has been hiking rates at the same pace as the Fed since the beginning of the summer.  In June, July, and August, the Fed hiked 75bps.  At the Banxico meetings in June, August, and September, the board also hiked by 75bps each time to bring the current benchmark policy rate to 9.25%, its highest level since 2005.  The FOMC meets again on November 2nd , and it currently expected to hike rates by another 75bps.  If that is the case, will the latest CPI reading matter to Banxico when it meets again on November 10th, or will the central bank just continue to match the Fed and hike by the same amount?

On a weekly timeframe, USD/MXN has been moving lower in a descending triangle since making pandemic highs in April 2020 near 25.7836.  Notice that the lows have been consistent around the same level between 19.5510 and 19.7005.  During 2022, USD/MXN has tested the top, downward sloping trendline of the triangle, only to be rejected each time with a long upper wick poking through the trendline. 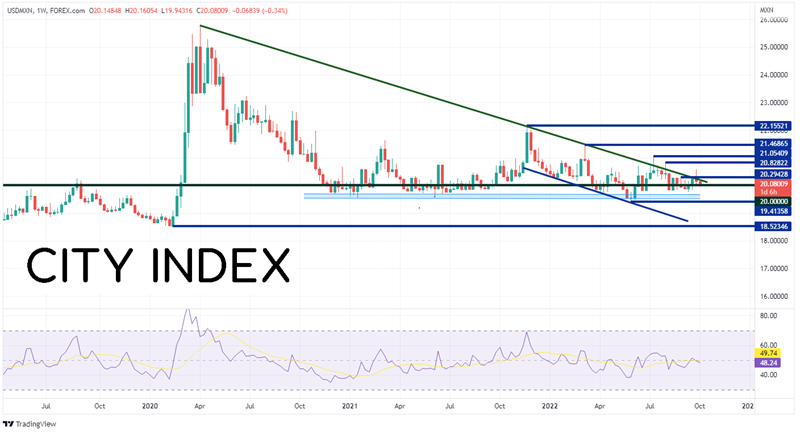 On a daily timeframe, USD/MXN has been oscillating around the 20.0000 level since mid-August.  Interestingly, with the US Dollar moving higher over the summer, the USD/MXN has not participated in the move. The pair is stalled at the long-term downward sloping trendline near 20.0670.  If the pair moves higher, the next resistance level is the spike high from September 28th at 20.5904, then additional spike highs at 20.8282 and 21.0541.  However, if the pair moves lower towards the bottom zone of support, the first level of support is at the September 12th lows at 19.7530, then the spike lows from May 20th at 19.4136. If price breaks below there, the next level is a confluence of support at the lows from February 2020 and the bottom trendline of the near-term channel at 18.5235. 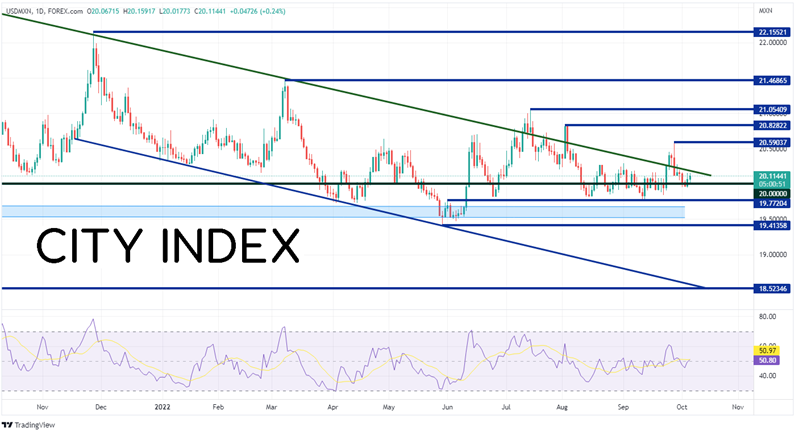 Mexico releases its CPI data for September tomorrow.  But will it matter?  Banxico has been hiking rates at the same pace as the Fed since the beginning of summer, most recently with a 75bps rate hike last week.  Therefore, no matter what the print is, the Bank of Mexico may be hiking the same amount as the Fed at the November meeting.