The Bank of England’s Monetary Policy Committee (MPC) will conclude its meeting on Thursday 16th June, with the statement scheduled for release at 12:00 BST. As well as the rate decision, will also get the meeting minutes and votes at the same time.

What are traders expecting from the BoE?

The market is expecting another 25 basis-point hike from the Bank of England, which would lift the benchmark Official Bank Rate (OBR) to 1.25% from the current 1.00% rate. Investors expect 75 basis points worth of rate hikes over the next two meetings. If the BoE opts for 25 this time, then 50 is likely to follow at the next meeting, bringing it closer to some of the other global central banks. Investors expect a terminal rate of around 3.25 to 3.50 percent by mid-next year. Perhaps a bit too optimistic?

The Bank of England’s policy decision will come hot on the heels of the US Federal Reserve’s  the day before. With the Fed expected to hike by 75 basis points, we could well see further losses for the GBP/USD even before the BoE’s decision should the US central bank opt for such an aggressive hike. Of course, other pound crosses will be impacted more by the BoE’s decision itself, especially if there are any surprises.

The MPC’s decision is not an easy one. It must balance the risk of keeping inflation persistently high by not being too aggressive against an uncertain growth backdrop. 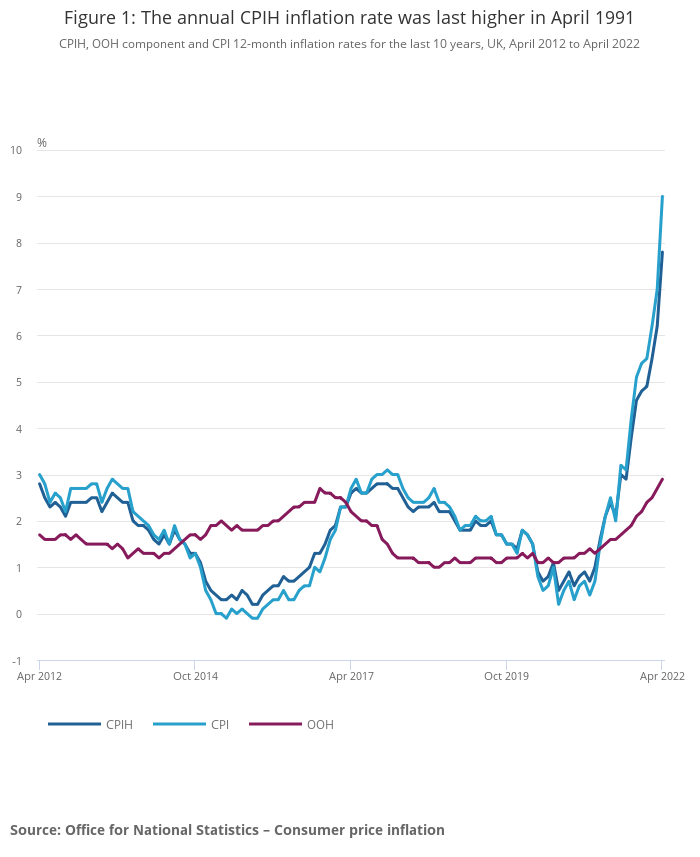 The UK jobs market is also strong enough to warrant a rate increase. The fact that the UK government provided £15bn extra government stimulus is also a reason to continue with the hikes, even if the economic outlook looks grim. We are likely to see hikes in June, August and September, but questions remain as to whether the BoE will up the pace of the hikes. A lot will depend on inflation and right now it doesn’t look like it is going down any time soon.

What’s worrying though is that several macro pointers have disappointed expectations and with inflation eating into consumers’ disposable incomes, a recession might not be unavoidable despite the government’s support. Indeed, consumer confidence remains very low, while the latest PMIs suggest a sharp slowdown in business activity is coming.

GBP/USD nears 1.20 ahead of FOMC and BoE 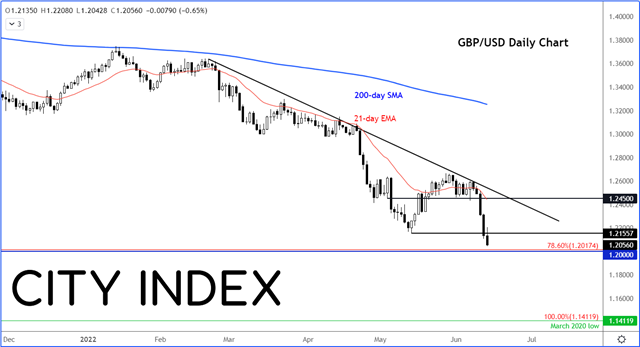 The GBP/USD was heading towards 1.20 at the time of writing, which is not only a psychologically-important level but it is where the 78.6% Fibonacci retracement level against the rally from March 2020 comes into play. The March 2020 low itself is another 600 pips lower and that level could potentially be challenged if the disparity between the Fed and BoE grows in terms of the latter being more hawkish. Meanwhile, resistance is seen around 1.2155, above which there is not much further big levels until 1.2450.

You can trade with City Index by following these four easy steps:
Open an account, or log in if you’re already a customer
Search for the company you want to trade in our award-winning platform
Choose your position and size, and your stop and limit levels
Place the trade
Related tags: BOE Trade Ideas GBP/USD Forex