The FOMC Minutes showed the markets what many investors have already known, in particular:

However, this seems to be old news as Fed member after Fed member has been more “hawkish leaning” since the March 16th meeting.  Fed Chairman Powell spoke in mid-March and said that “if the Fed needs to tighten above neutral rate, it will do so.” In addition, when asked what would prevent a 50bps hike at the May meeting, Powell replied “nothing!”. Yesterday, the Fed’s Brainard said that the “Fed is prepared to take strong action if inflation and inflation expectation indicators suggest a need for such action”.  Regarding the balance sheet, she indicated that the Fed could begin to reduce at a “rapid” pace.  In addition, the Fed’s George said that a 50bps hike is an option we have to consider.  Today, the Fed’s Harker and Barkin echoed these same sentiments.

The DXY continued its assault higher towards the 100 level. First resistance is at the 127.2% Fibonacci extension from the high of March 7th to the lows of March 30th, at 99.89.  If price can trade above there, the next resistance level is psychological round number resistance level at 100.00, then the 161.8% Fibonacci extension from the same recently mentioned timeframe at 100.49. First support is at today’s low near 99.31, then the top, upward sloping trendline of the long-term channel near 99.00.  Below there, the DXY can fall to horizontal support at 98.43. 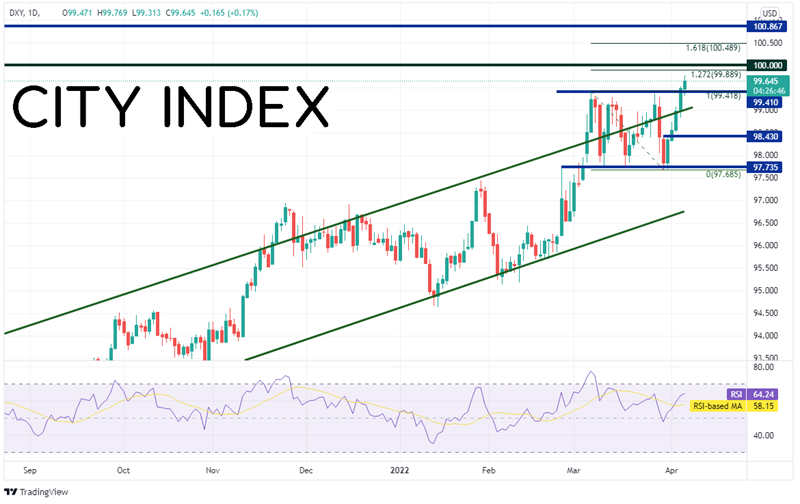 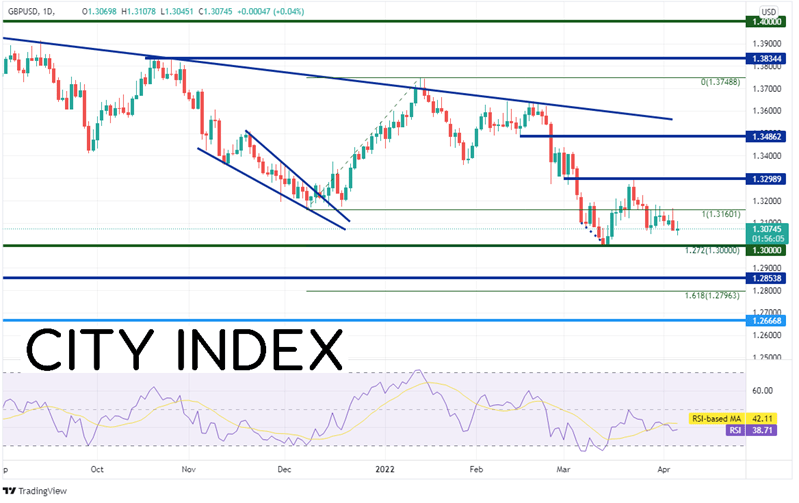 The Minutes from the March 16th FOMC meeting had some good information, however they were a bit stale, as almost all Fed speakers have been hawkish lately.  However, the DXY did continue its move towards 100.00 and GBP/USD tried to get near 1.3000.  If the hawkish signals continue from Fed officials, prices may reach those levels soon.