US equities suffered one of their worst weeks since the pandemic

Wall Street continued its downwards trajectory on Friday with the S&P 500 closing marginally beneath its 200-day eMA and at the low of the day and week. Falling over -5%, it was its worst week for the index since March 2020. Ultimately, it was a sea of red for equity traders last week with the Nasdaq 100 falling -7.5% with around 40% of its constituents down early 50% from their 52week highs and the Russell 200 falling -8.1%. The reality of a hawkish Fed seems to finally be sinking in. 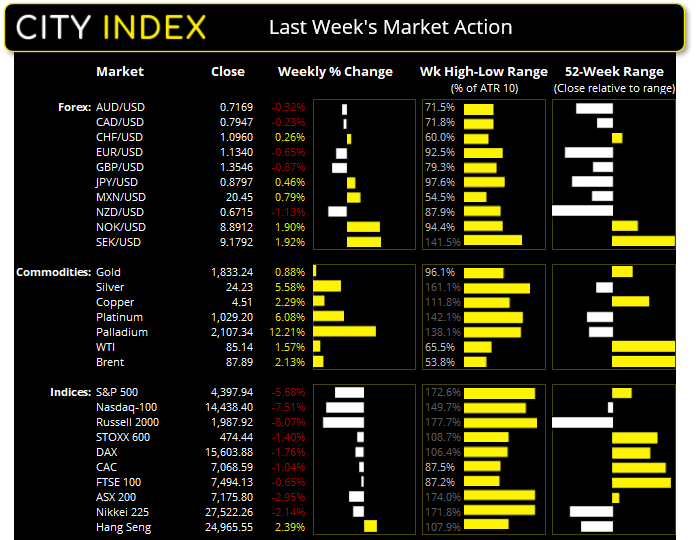 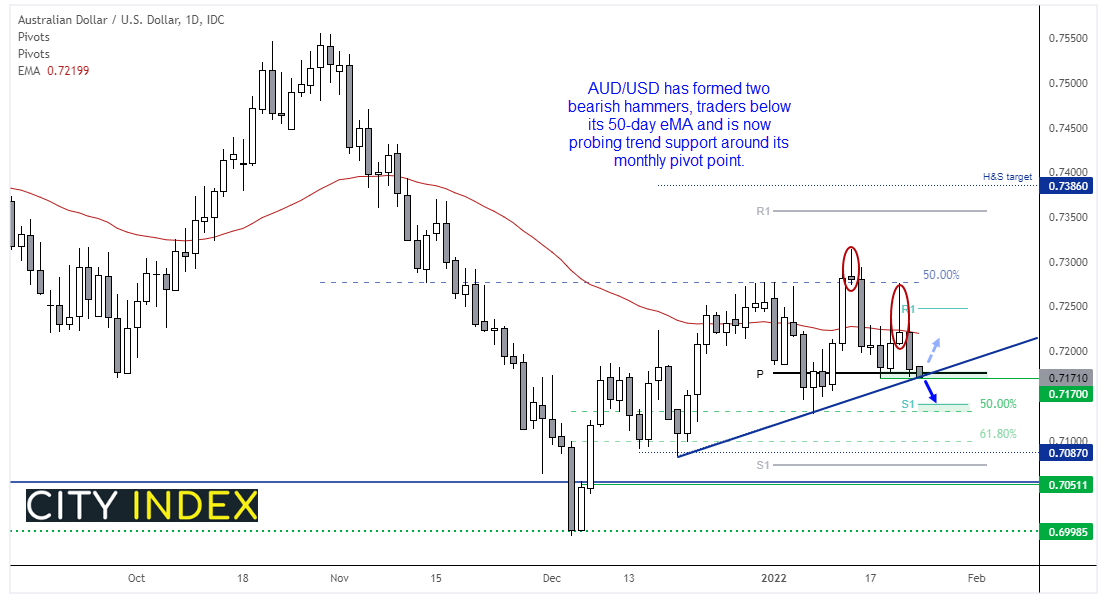 AUD/USD is probing trend support near a cluster of levels including the monthly pivot point and 0.7170 low. The pair has been trying to grind out a to for a few week with a bearish hammer marking a top around 0.7300, and a second bearish hammer forming a lower high and respecting the 50% retracement level as resistance last week. The 50-day eMA also capped as resistance for most of last week so we now await bearish momentum to return. A break beneath trend support brings the support zone around 0.7133 into focus. Until then be on guard for a bounce from support, although the bias is for an eventual break lower (sooner or later).

Read our guide on the Australian Dollar

Despite the risk-off tone gold traded lower on Thursday and Friday, although its lack of bearish follow-through suggests it’s a minor pullback ahead of its next leg higher. The spot price now trades slightly below the 1834 support level but we’ll continue to see if momentum can turn higher and challenge a resistance zone around 185555 this week.

We saw a bit of a shakeout around $85 on WTI last week and, despite a weak start on Friday, bulls regained control and formed a bullish hammer on the daily chart by Friday’s close. However, take note of the bearish trendline which was breached on Friday on the intraday chart and price action is crawling up the inside of it. SO whilst prices remain below the October highs we are also on guard for another leg lower.

Hang Seng to break above 25k?

The HSI was one of the few indices to trade higher last week, after further easing from PBOC helped bolster and arguably oversold index. It broke out of a flag pattern (which itself invalidated a long-term bearish trendline) which projects a target around the October high. Closing just below 25k on Friday we now wait to see if it can break above that key level to continue higher towards its initial target.

Friday was its second worst session since January 2021 and prices closed to their lowest level since June 2021 and well below the 200-day eMA. 7145 is a key level of support for bulls to defend today. Technology stocks have been the worst performers this month so far, falling nearly -15% with healthcare down around -10%. Only utilities and materials sectors have posted gains in January so far, up around 3% and 4.9% respectively. 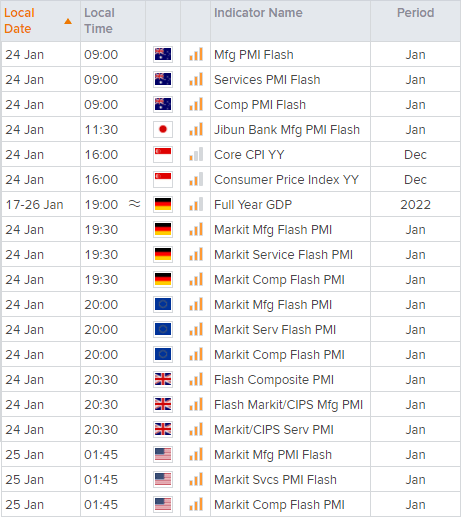 Flash PMI’s are the main theme for traders today. Markit Economics will release PMI data for manufacturing, services and the composite read for Australia at 09:00 AEDT, with Japan releasing their manufacturing report at 11:30.

View more
Currency Pair of the Week: GBP/USD
Stocks: No end in sight for bear trend
What is the short interest ratio?
Burberry FY preview: Where next for the Burberry share price?
US open: Stocks point to a mixed start, growth fears persist
Reddit stocks: what meme stocks are trending?