Week Ahead: Fallout from BOE and NFP; Focus on CPI

Last week, the US Non-Farm Payroll print of 528,000 more than doubled the expectation of 250,000.  In addition, the Average Hourly earnings rose by 0.4%.  The Fed has been keen on the jobs data, as members point to the low Unemployment Rate (3.5%) as a reason which allows it to continue to hike rates aggressively.  In addition, last week the BOE delivered a 50bps hike, as expected, however, it then threw the market a curveball as it said that it sees 5 quarters of negative growth ahead! This week, the market will be focusing on inflation data, namely the US CPI. Did Fed rate hikes begin to affect inflation?  Have we reached peak inflation?  Also, earnings continue to roll out as large firms such as Disney and Coinbase report this week.

The US released Non-Farm Payrolls on Friday which showed that the it added 528,000 jobs to the economy in July!  That is more than double estimates!  In addition, Average Hourly Earnings increased by 0.4% and the Unemployment rate fell to 3.5%. These are signs of a strong jobs market.  (See our complete NFP recap here). The Fed has been pointing to the labor market as a sign that the US is not in a recession. However, there are others that argue that the jobs data is a lagging indicator.  Therefore, if we are in a recession, the jobs report won’t show lower employment figures for months out. That may be the case, but the Fed isn’t buying it.  Last week, Fed member after Fed member was out in force stomping for a high pace of increasing interest rates.  Watch for more tape bombs from hawkish Fed speakers this week.  However, the FOMC doesn’t meet again until late September. Therefore, markets will get a look at August’s NFP and other jobs data before the Fed meets again.

The Bank of England hiked interest rates by 50bps last week, as expected, to bring the main rate to 1.75%. (See our complete BOE recap here).  However, the statement also said that the BOE expects to see 5 negative quarters of GDP starting in Q4, 2022 and ending in Q4, 2023.  That would be the largest recession since the Great Financial Crisis.  The Committee also said that it expects inflation to rise to 13.3% YoY in October and remain very elevated through much of 2023.  The combination of a recession and high inflation would be the worst squeeze of living standards in 60 years!  In addition, the BOE said that it will not move rates on a predetermined path, like similar messages from the ECB and the Fed.  As for data from the UK this week, GDP for Q2 will be released.  Expectations are for a contraction of -0.2% vs a Q1 print of 0.8%.  The June GDP reading alone is expected to be -1.3% vs a May reading of 0.5%.  If the Q2 print is negative, the UK may already be in a recession.

See how professional traders are positioned across forex and commodity markets with our weekly commitment of traders (COT) report. -updated every Monday!

Earnings season continues with popular names such as Disney and Coinbase reporting this week.  The focus will be on Coinbase, as it has just reported that it will offer Blackrock clients crypto trading. (See our complete Coinbase preview here.)  For a complete preview of earnings due out this week, see my colleague Josh Warner’s preview here. Other company earnings due out this week are as follows:

In addition to the above-mentioned UK GDP, the US CPI for July will be a main focus this week.  Expectations are for a headline print of 8.7% YoY vs a June reading of 9.1% YoY.  Could inflation have peaked?  Will the Fed get its “soft landing”? For good measure, the Core inflation rate will also be released.  The core reading excludes food and energy.  Expectations are for the core rate to have risen from 5.9% YoY to 6.1% YoY.  The US will also release its first look at the August Michigan Consumer Sentiment Index and China will release CPI.  Other economic data due out this week is as follows:

Chart of the Week: Daily USD/JPY 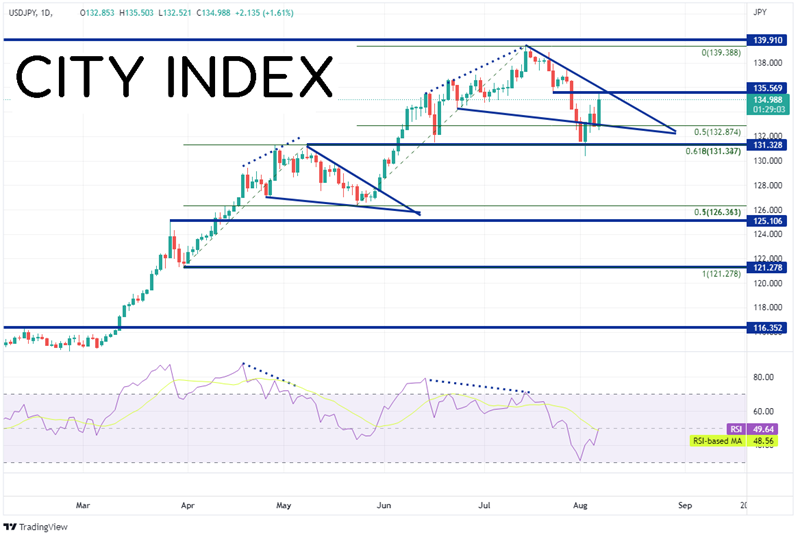 USD/JPY has been moving aggressively higher since breaking 116.35 on March 11th.  The pair traded to a high of 131.33 on May 9th as the RSI moved into overbought territory.  USD/JPY then consolidated in a descending wedge formation and price pulled back to the 50% retracement level from the lows of March 31st to the highs of May 9th, as the RSI pulled back into neutral territory.  On May 31st, the pair broke above the top trendline of the pattern and was on the move again.   On July 14th, USD/JPY reached its highest level since 1998, as the RSI was in overbought territory once again.  Price pulled back in a descending wedge pattern as the RSI moved back into neutral territory.  However, this time, price overshot the 50% retracement level and broke below the bottom trendline.  Would this time be different?  On August 1st, USD/JPY traded down to, and held, the 61.8% Fibonacci retracement level from the May 24th low to the July 14th high near 131.33.  The next day price reversed and closed back inside the wedge, posting a false breakdown.  On August 5th, after the NFP data was released, USD/JPY rallied 200 pips and closed at horizontal resistance and the top trendline of the wedge.  Expectations are that price will breakout through the top of the wedge, just as it did in May. If the US Dollar continues to rally this week, USD/JPY may be back at 139.39 in a hurry.

This week expect to see more follow through price action from Non-Farm Payrolls and the BOE.  In addition, watch the data to see if inflation has peaked or continued higher. Is the world moving towards a recession with low growth and high inflation?  The US has already released 2 consecutive quarters of negative growth.  Watch UK GDP this week to see if the UK could be headed towards a recession as well!

Earnings This Week: Disney, Coinbase and Rivian
By:
Joshua Warner