Conflict creates volatility for stocks with exposure to Russia and Ukraine

London-listed stocks to watch amid the Russia-Ukraine conflict

Russia’s invasion of Ukraine has injected volatility into a number of London-listed stocks, especially those based in or that have significant exposure to either country.

There are a number of reasons why stocks like Polymetal, Ferrexpo, Evraz and Petropavlovsk have suffered steep falls in recent days and been the biggest losers within the FTSE 350. There are fears that operations will be disrupted, that they could be caught up in sanctions that could crimp sales and profits, that they will struggle with finances as Russian banks are targeted by the West, or that an economic slowdown in Russia could hurt demand for businesses.

In the FTSE 100, Polymetal and Evraz have significantly underperformed the market since news of the initial invasion broke on February 24. 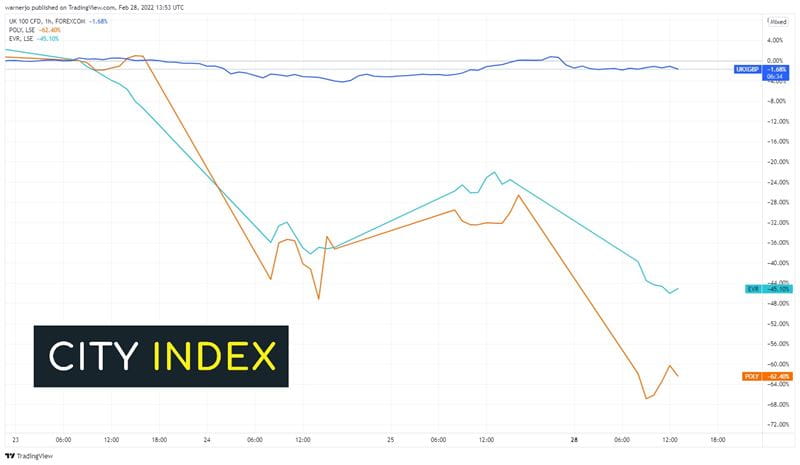 Meanwhile, Petropavlovsk and Ferrexpo have also been among the worst performers in the FTSE 250. 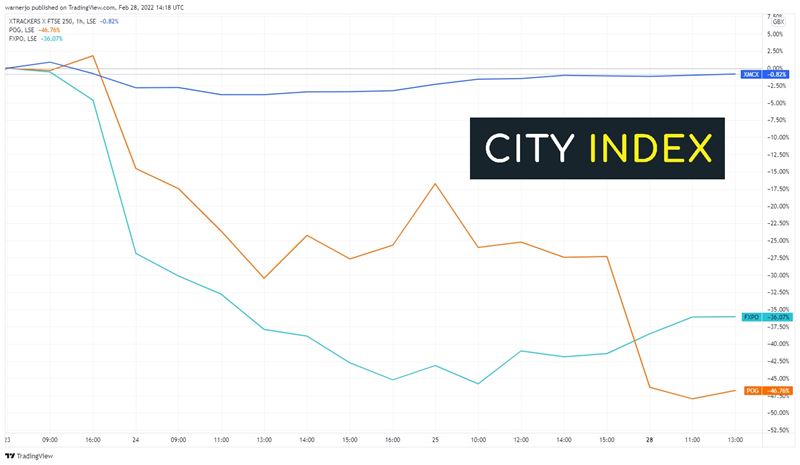 Let’s have a look at some of the biggest businesses listed in London that have seen their share prices suffer as a result of the conflict. They are likely to remain highly volatile while the conflict continues to escalate, but will could swiftly turn into recovery plays should there be any signs that tensions are easing or a peaceful resolution could be found.

Polymetal is one of the largest gold and silver producers in the world, with most of its precious metals coming out of Russia but also Kazakhstan. It is listed in London, Moscow and Astana.

Polymetal was swift to respond to the crisis in Ukraine in order to calm the markets, although that has not prevented a huge selloff in the stock. The company said all of its operations ‘continue as usual’ and reaffirmed its production and cost guidance for 2022.

It also said that initial sanctions ‘have not affected Polymetal’ – although that could change as the West continues to ramp-up its economic fight with Russia.

‘The rapid deterioration in the situation in Ukraine has led to a material increase in possibility of additional and more severe sanctions to be imposed by the EU, the UK and the US. The scope and impact of these new potential sanctions (and any potential counter-sanctions) is yet unknown, however they might affect key Russian financial institutions as well as mining companies,’ the miner said on February 24.

Polymetal is scheduled to publish full year results for 2021 on Wednesday March 2 and there is little doubt that the primary focus will be on the evolving situation.

Evraz is a major company that mines coal, vanadium and iron ore, turns it into steel and then sells it all over the world - although it is in the process of demerging its coal business. Most of its steel production facilities are in North America and supplied by its mining operations that are mostly based in Russia and Kazakhstan, with one mining operation in the Czech Republic.

Most of the steel Evraz produces is made using the raw materials it mines and that could pose a problem if sanctions are imposed making it more difficult to ship materials mined in Russia to be turned into steel in the US, or if any measures are introduced to prevent its steel being sold.

Evraz, which has Chelsea Football Club owner and Russian billionaire Roman Abramovich as its largest shareholder with a 28% stake, released its annual results on February 25 and said it was ‘conscious of the current geopolitical circumstances’. Journalists were not allowed to ask questions during the subsequent conference call and management stuck to a line that it was too early to discuss what the impact of any sanctions could be, including on the banks that provide debt to the business. But it did say the ‘worsening situation related to Ukraine has further increased the economic uncertainty and the risk of the imposition of sanctions’ and admitted dividends could be at risk if it wasn’t able to export outside Russia’s sphere of influence.

The conflict has caused oil prices to surge past $100 for the first time since 2014 over fears it will cause significant disruption to supplies, helping push oil stocks higher. But markets have not shown the same enthusiasm for BP due to its large exposure to Russia, including a 19.75% stake in state-owned Rosneft.

BP has announced it is cutting ties with Russia after 30 years after announcing it plans to exit its stake in Rosneft and that its nominees have resigned from the Russian company’s board following the invasion.

The move will not come cheap. BP is set to book tens of billions in non-cash charges as a result of the move, and could struggle to find a willing buyer for the stake in the current environment, even at a toned-down book value of $14 billion.

BP will also no longer recognise a share of Rosneft’s production, reserves or earnings as its own. For context, Rosneft accounted for about one-third of BP’s oil and gas production last year and BP’s share of Rosneft’s underlying net income in 2021 came to a significant $2.7 billion (around one-fifth of BP’s total). BP’s share of the Rosneft’s dividend last year came to around $640 million. BP has assured investors that it can continue to distribute cash back to them through dividends and buybacks.

You can read more on BP’s plans to exit its Rosneft stake here.

Ferrexpo is the third largest producer of iron ore pellets, which are used in the steelmaking process, in the world. All three of its mines – Poltava, Yeristovo and Belanovskoye – are located in Ukraine.

The concern at the forefront of investor’s minds is that conflict will result in significant disruption for operations, which lie in the centre of the country just south of Poltava, which is around two hours away by car from Kharkiv, a key hub of battle in the early stages of the conflict.

Ferrexpo has said its mining operations continue as usual, but it is having to stockpile iron ore pellets because the logistics network across the country is suffering severe disruption. Rail networks have been closed and exports out of ports halted.

Petropavlovsk is one of the largest gold miners in Russia. Its three mines – named Pioneer, Albyn and Malomir – are supported by a number of processing plants and vast rail infrastructure that spans across the far east of the country.

Petropavlovsk has not yet released a statement addressing the fears that are causing volatile movements in its share price, but sentiment is similar to that being shown by investors to the likes of Evraz and Polymetal.

Raven Property invests in a number of warehouses spread across Russia and the company is listed in London, Moscow and Johannesburg. It has around 1.9 million square metres of top tier warehouse space in Moscow, St Petersburg, Rostov-on-Don, Novosibirsk and Nizhny Novogorod and also has office space in St Petersburg.

The fear here is that sanctions and isolation of Russia will significantly hurt the economy, which in turn could hit the tenants based in its warehouses and threaten demand and prices for its properties. It typically rents out its space to large domestic and international groups, so any withdrawal from foreign businesses also poses a threat.

Raven Property has not yet released a statement concerning the situation as of yet.

You can trade a variety of stocks with City Index in just four easy steps:

A guide to the Google (Alphabet) stock split 2022
By:
Rebecca Cattlin