US indices drift lower as focus turns to Powell

All eyes and ears are on Powell’s speech today and then the focus will shift to US CPI on Thursday. So far in this new year, sentiment has remained largely positive with equities, commodities and foreign currencies rising against the US dollar. China has led emerging markets higher on hopes the re-opening there will provide a strong recovery in demand. Investors are also looking past the near-term rate hikes from central banks and hope that they will soon pause and eventually reverse policy tightening because inflation has peaked.

Investors are growing increasingly confident in their view that the Fed’s tightening cycle will end this quarter, before it starts an easing cycle in the third quarter. But there is a risk that Fed Chair Powell or economic data contradicts that view, which is why we are erring on the side of caution.

Powell is due to speak at 14:00 GMT today at a conference on central bank independence.  However, it is unclear whether he will talk much about the outlook for US monetary policy, and if he does whether he will push back against the recent softening in US financial conditions.

The market continues to disagree with the Fed’s central view that the funds rate will be raised to 5.00% this year and kept there for a long time. In fact, markets are starting to price in 50 basis points worth of easing cycle in the second half of the year.

But as we have seen time and again, the Fed has repeatedly thrown cold water on the market’s optimistic views. Yesterday’s hawkish Fed comments saw US indices give back their earlier advance and futures have since drifted further lower ahead of Powell’s speech. Two Fed officials said interest rates would likely reach and could even surpass 5%, namely Atlanta Fed President Raphael Bostic and San Francisco Fed President Mary Daly. But the key question is whether Powell himself still holds his hawkish views in light of the weaker wage growth and some signs that an economic recession is looming.

Monday’s resulting price action left behind an inverted hammer candle on the S&P chart, which is not a great sign after the index’s breakout just the day before. Short-term support is seen around 3862, which needs to hold to keep the bulls happy. But a move below this year’s opening level could put the bulls in a spot of bother. The line in the sand is probably Friday’s low at 3798. If that level breaks then the bears will be back in full control again. 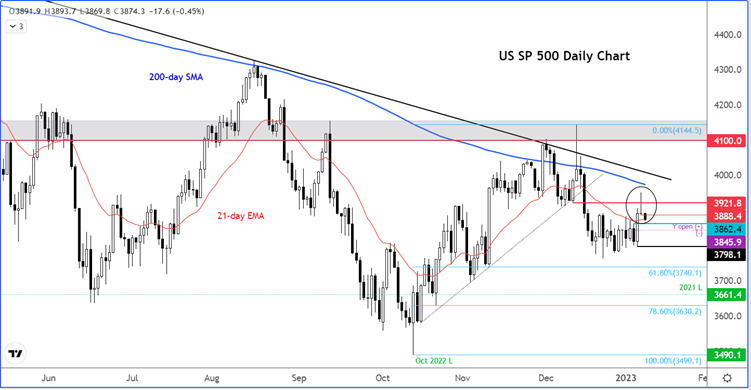