Currency Pair of the Week: EUR/USD

EUR/USD started the week on a positive note thanks for Spain’s Harmonized CPI, which came in at +5.8 YoY vs 4.7% YoY expected and +5.5% YoY last.  On Tuesday, markets will get a look at CPI from France and Germany, ahead of the Eurozone January Preliminary CPI on Wednesday.  Expectations are for a print of the headline CPI to drop to 9% YoY from 9.2% YoY in December.  The Core rate is expected to drop to 5.1% YoY from 5.2% YoY in December.  Will these inflation prints affect the ECB’s monetary policy interest rate decision when it meets on Thursday?  Expectations are for a 50bps rate hike, which would bring the key rate to 3.00%. Many members of the Committee, including ECB President Christine Lagarde, have already indicated that a 50bps hike is a done deal.  Anything different will disappoint the markets.  But traders will be watching for signals that another 50bps rate hike is in the cards for March.  Christine Lagarde said during the press conference at the December meeting that a series of 50bps rate hikes is ahead.  Will she follow through?  It should also be noted that the EU will release its Flash GDP for Q4 on Tuesday.  Expectations are for an increase of only 1.8% vs a 2.3% print in Q3.

Last week, the US released one of the Fed’s favorite measures of inflation, the Core PCE Price Index.  The print was 4.4% YoY, as expected, vs a prior reading of 4.7% YoY.  On Tuesday, the US will release another important gauge of inflation which the Fed relies heavily on:  The Q4 Employment Cost Index (ECI).  Expectations are for an increase of 1.1% vs a Q3 reading of 1.2%.  How will these prints affect the FOMC when it meets on Wednesday?  The markets are already pricing in a 99% chance of a 25bps hike, which would bring the Fed Funds rate to 4.75%.  Traders will be paying close attention to the statement and the press conference to see if the Committee guides towards an additional 25bps in March.  Any hawkish signals could send the US Dollar higher and stocks lower.   In addition, although it will be after the Fed’s rate decision on Wednesday, the US will release Non-Farm Payrolls for January on Friday.  The expectation is for an increase of 185,000 jobs to the economy vs a previous gain of 223,000.  However, just as important for the markets as the headline number, will be Average Hourly Earnings.  Last month, the MoM print was worse than the expected 0.4%, at 0.3%.  However, the big surprise came in the revision to the November print.  It was revised from 0.6% to 0.4%. Markets have been pessimistic on the US Dollar since, as it was a sign of lower wage increases (deflationary). Traders will be paying close attention to this print on Friday.

On a daily timeframe, EUR/USD has been moving in an orderly upward sloping channel since the end of November 2022, when price made a near-term low of 1.0223.  However, since January 12th, when the pair reached 1.0852, price has been fairly tight, trading near the top trendline if the channel.  Since January 18th, the pair has been trading in an ascending wedge with a low of 1.0766 and a high of 1.0930. On Friday, price dipped below the bottom trendline of the wedge but moved back inside it on Monday. 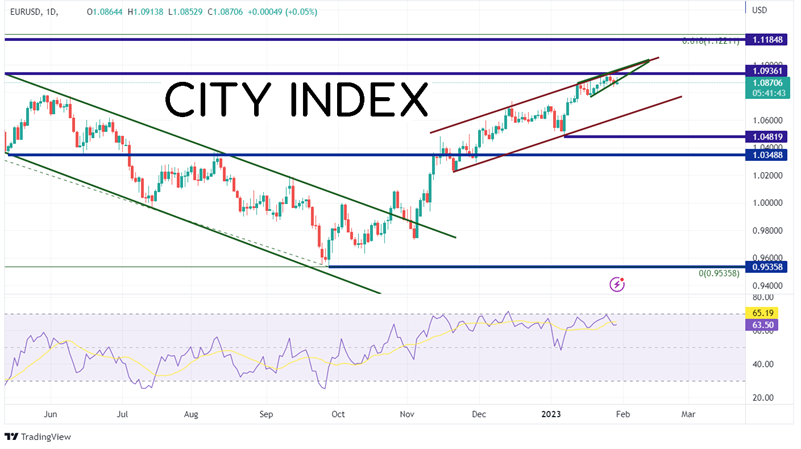 On a 240-minute timeframe, EUR/USD is moving lower once again out of the ascending wedge.  If price continues to move lower, first support is at the low from January 27th at 1.0838.  Below there, price can fall to the bottom of the ascending wedge at 1.0766 then horizontal support at 1.0713.  However, if price does move back into the wedge, there is a band of resistance at a horizontal trendline dating to April 22nd, 2022, the top trendline of the channel, and the top trendline of the ascending wedge.  These all cross between 1.0936 and 1.0966.  Above there, price can move all the way back up to the highs from March 31st, 2022 at 1.1185. 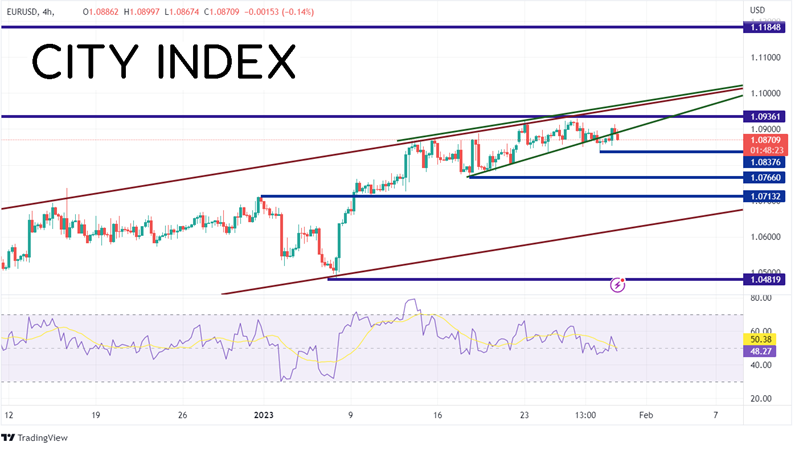 With the FOMC and the ECB meetings, along with a treasure trove of important economic data from the US and Europe, EUR/USD should be volatile this week.  Watch for comments from the FOMC regarding additional rate hikes in March.  As for the ECB, watch for any comments that would suggest a 50bps rate hike may not be ahead. Any dovishness from the ECB may cause the Euro to move lower.