Friday 20th January 2017 will see Donald Trump sworn in as the 45th President of the U.S.A. He has already proved to be a controversial choice for President, and his prolific tweeting has highlighted a sharp shift with the previous administration.

Trump has been vocal about his plans for the economy in the run up to his inauguration, and US financial markets have basked in the pro-business change in policy that is expected once the new President takes office. However, the focus post the inauguration will be how fast policies can be implemented, and whether Trump can deliver on all of his promises.

There are already some doubts starting to creep in, and in recent weeks US stock markets have pushed the pause button and traded sideways. The table below shows Trump’s promises and their market reaction: 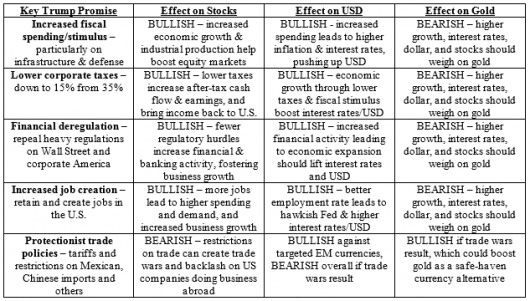 As you can see, there is a lot of bullish expectations around Trump’s policies, however, there are also some major road-blocks to his vision to Make America Great Again (MAGA). The table below lists some of those challenges: 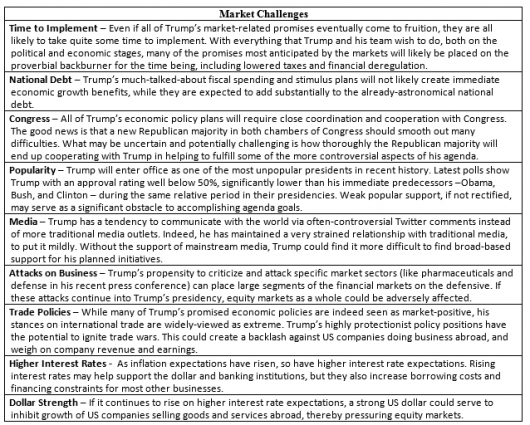 Trumpenomics’ threat to US growth

The biggest problem with ‘Trumpenomics’ is that fiscal expansion coupled with protectionism tend to boost growth and employment when the unemployment level is high, however, the US is experiencing a very high level of employment at the moment, so these policies could actually hinder Trump’s hopes of doubling the growth rate during his term in office.

For example, a large fiscal stimulus programme when employment levels are high does not boost production, but instead tends to increase inflation pressures. Likewise, any protectionist policies like increased tariffs on certain imports could also push up price pressures as household purchasing power remains strong.

Trump’s economic policies actually increase the risk of higher interest rates over the next four years, as the Federal Reserve tries to neutralise looser fiscal policy with tighter monetary policy. Thus, Trumpenomics could lead to a cyclical downturn in the medium term.

There are two main risk factors from Trump’s Presidency, in our view. The first is a sell-off in the short-term once Trump moves into the White House. Much of the ‘good’ news for financial markets has already been priced in since November, thus, risk could get sold-off in a traditional buy the rumour, sell the fact trade.

A larger concern for traders could be the potential for increased levels of financial market volatility under Trump, as the market waits to see if and when his policies are enacted. Other risks for higher levels of volatility going forward include the President continuing to undermine certain corporations via Tweet, Boeing, healthcare and defence companies have all come under criticism from Trump in 140 characters. The US dollar also came under pressure recently, after Trump commented on the negative impact of a strong dollar.

US financial stocks, which have rallied sharply since Trump won last year’s election, have seen a wave of selling interest in the last week as investors take profit ahead of Trump taking office. The risk for financial stocks is that the President won’t be able to reduce financial market regulation, like he promised, leading to a deeper decline. Other sectors, including infrastructure are also at risk if Congress does not enact Trump’s promised fiscal stimulus programme.

Overall, the markets have been willing to give Trump the benefit of the doubt in the last two and a half months’. Now that reality hits, profit-taking could be the order of the day.

APE dividend: is it an AMC stock split?
By:
Rebecca Cattlin