Why trade forex with us?

Our performance in numbers

View more
What is a fiat currency? Everything you need to know about the classic monetary asset
By:
Ryan Thaxton

USD/JPY heading to 130?
European Open: DAX considers its next breakout, US PPI in focus
Whilst inflation may have peaked, the ‘Nowcast’ seems less certain
Weak US CPI means EUR/USD 1.05 no longer unrealistic

*Spread Betting and CFD Trading are exempt from UK stamp duty. Spread betting is also exempt from UK Capital Gains Tax. However, tax laws are subject to change and depend on individual circumstances. Please seek independent advice if necessary.

*Spread Betting and CFD Trading are exempt from UK stamp duty. Spread betting is also exempt from UK Capital Gains Tax. However, tax laws are subject to change and depend on individual circumstances. Please seek independent advice if necessary.

Seize trading opportunities with our most easy-to-use mobile app to date, with simple one-swipe dealing, advanced charting, and seamless execution. Available on Android and iOS.

Harness the power of technical analysis and access real-time trade ideas on our most popular markets.

Gain deeper insight into your trading and discover how you could improve your performance. 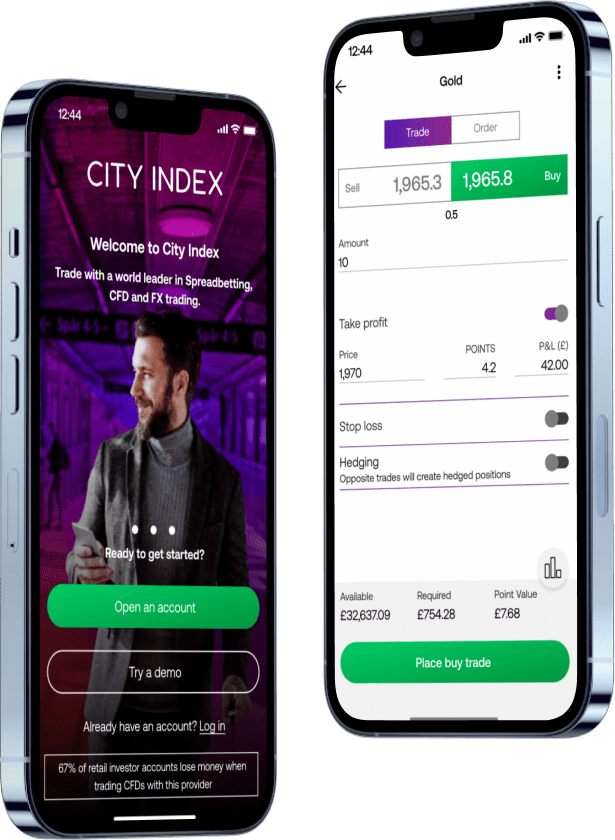 How to trade forex

Currencies always trade in pairs – one against the other. If one appreciates in value, it does so at the expense of the other.

If you believe that a currency pair such as the British pound will rise against the US dollar you can place a buy trade on GBP/USD. If the price rises, you will make a profit for every point that GBP appreciates against the USD. If the market falls, then you will make a loss for every point the price moves against you. Our trading platform tells you in real-time how much profit or loss you are making.

You can also profit from a falling currency. If you think that GBP will fall in price, you sell or short GBP/USD when you open the trade. Your position will stay open as long as you want it to, providing you have enough money in your account to cover the required margin.

With City Index you can trade global currencies as a spread bet or as a margined FX product. 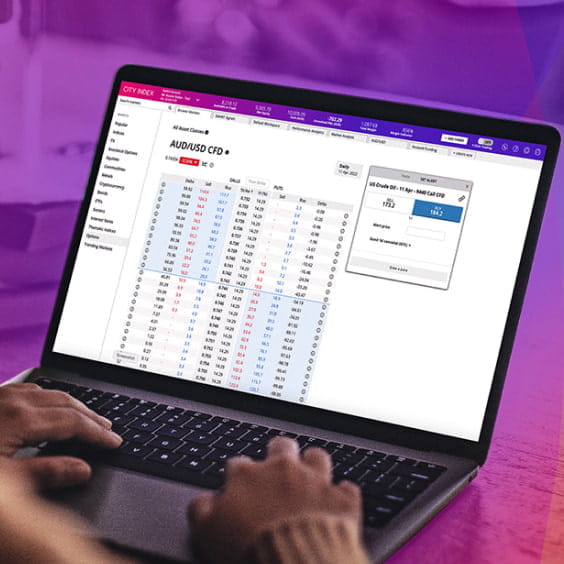 How to trade forex

Follow our step-by-step guide on how to trade forex and you could be placing your first FX trade in minutes.

How to trade FX
What is forex trading?

Learn why leveraged forex trading is popular with investors, and how the FX market works.

What is FX?
Start forex trading

To begin forex trading with City Index, simply follow our three-step guide to open an account and you could be placing your first forex trade in minutes.

Put our trading platform to the test

Try a risk-free demo account with virtual funds to hone your trading strategies.
Try a demo
Why choose City Index?

Tools and insight
From personalised Performance Analytics to AI-powered SMART Signals, you have a wealth of exclusive tools at your disposal to maximise your trading potential.
Our tools
More markets to consider

Bonds
Take a position on government bonds such as 10-year US T-Note, UK Long Gilt and Euro Bunds.
Bonds trading

Options
Trade options on over 40 markets, including the UK 100, SP 500 and Germany 40, all from 4 points.
Options trading

Where is forex traded?

Forex is traded via a global network of banks in what’s known as an over-the-counter market – unlike shares and commodities, which are bought and sold on exchanges. Because of this, you can trade forex 24-hours a day.

FX trading is split across four main ‘hubs’ in London, Tokyo, New York and Sydney. When banks in one of these areas close, those in another open, which is what facilitates round-the-clock trading.

However, there’s no physical location where these banks and individuals trade with each other. Instead, it is entirely online.

Learn more about how to trade forex.

Why do people trade currencies?

People trade currencies for lots of different reasons. You’ve probably traded a currency if you’ve ever bought goods overseas, for example, or gone on a foreign holiday. However, the vast majority of FX trading is done for profit.

Currencies are constantly moving in value against each other. On any given day, the pound might be rising against the dollar, while the euro falls against the Swiss franc. Forex traders buy and sell currency pairs to try and take advantage of this volatility and earn a return.

For instance, if the pound is rising against the dollar, you might buy GBP/USD. When you buy this pair, you’re buying pound sterling (GBP) by selling the US dollar (USD). Then, if the pound continues to outpace the dollar, you can sell the pair to exchange your GBP back for USD and keep the difference as profit.

When is the forex market open for trading?

The forex market is open for trading 24-hours a day from 10pm (UTC) on Sunday to 10pm (UTC) on Friday. That means with FX, you can build your trading strategy around your schedule, instead of having to conform to when a stock exchange is open.

However, there are times when the market is much more active, and times when it is comparatively dormant. To learn the best times to trade forex, read our dedicated page.

A market that doesn’t sleep

Foreign exchange (forex) or FX trading involves trading the prices of global currencies, and at City Index it is possible to trade on the prices of a huge range of global currencies. Currency trading allows you to speculate on the movement of one currency against another, and is traded in pairs, for example the Euro against the US Dollar (EUR/USD).

Currency markets are open 24 hours a day. There is no central exchange for trading Forex: instead prices are determined by interbank trading, the exchange of currencies between banks on a constant basis, all over the world.

The currency market is much bigger than share markets. The daily volume of global forex markets is estimated at over $4 trillion.

Currencies are traded in pairs – this means you can only trade one currency against another. You can’t trade a currency in isolation. Each currency has its own three letter code, for example, the US Dollar is abbreviated to USD.

An example of a major currency pair is USD/JPY pair.

If traders are positive on the prospects for the Yen, they would expect overall number to go down – i.e. the Yen would be getting stronger against the Dollar. Traders would be buying less Yen with a Dollar as the Yen got stronger. Similarly, if the Yen was expected to weaken, forex traders would expect the Yen number to go up, reflecting the fact that the dollar could buy more yen.

Currency markets never decline in absolute terms – for one currency to go up, there will be others weakening against it. All currencies cannot go up at the same time. There is always going to be a loser.

Currency markets are important to a broad range of participants, from banks, brokers, hedge funds and investor traders who trade FX. Any company that operates or has customers overseas will need to trade currency. Central banks can also be active in currency markets, as they seek to keep the currency they are responsible for trading within a specific range.