Today’s key US data has just been released and the US dollar and bond yields whipsawed in initial reaction.

The latest manufacturing PMI revealed, among other things, that prices have tumbled in the sector in another sign that we may have reached peak inflation, while the slump in orders, production and jobs all point to weakness in the economy. Separately, constructing spending tumbled 1.1% month-over-month in June. Thus, today’s US data is consistent with what the markets have been pricing in over the last few weeks: namely, peak inflation and falling economic activity. This should keep the dollar and yields undermined, supporting foreign currencies and gold. The ISM non-manufacturing PMI, due out on Wednesday, could provide the next catalyst for the dollar, given that the US is a services-led economy. If we see weakness in the services sector, this should weigh on the greenback as investors will likely further reduce their expectations about another 75-basis point hike from the Federal Reserve.

The headline ISM Manufacturing PMI wasn’t great itself, by any means. It printed 52.8, its lowest level since July 2020, down from 53.0 previously. But this was still better than 52.0 expected. The details of the PMI report revealed that new orders fell deeper into contraction to 48.0 from 49.2. But the big surprise was in the Prices Paid sub index, which tumbled from 78.5 to 60.0, way more than 73.5 expected.

In light of today’s US data, I think we should now see a clean breakout in the EUR/USD above the 1.0250 resistance area, towards the next potential resistance at 1.0350: 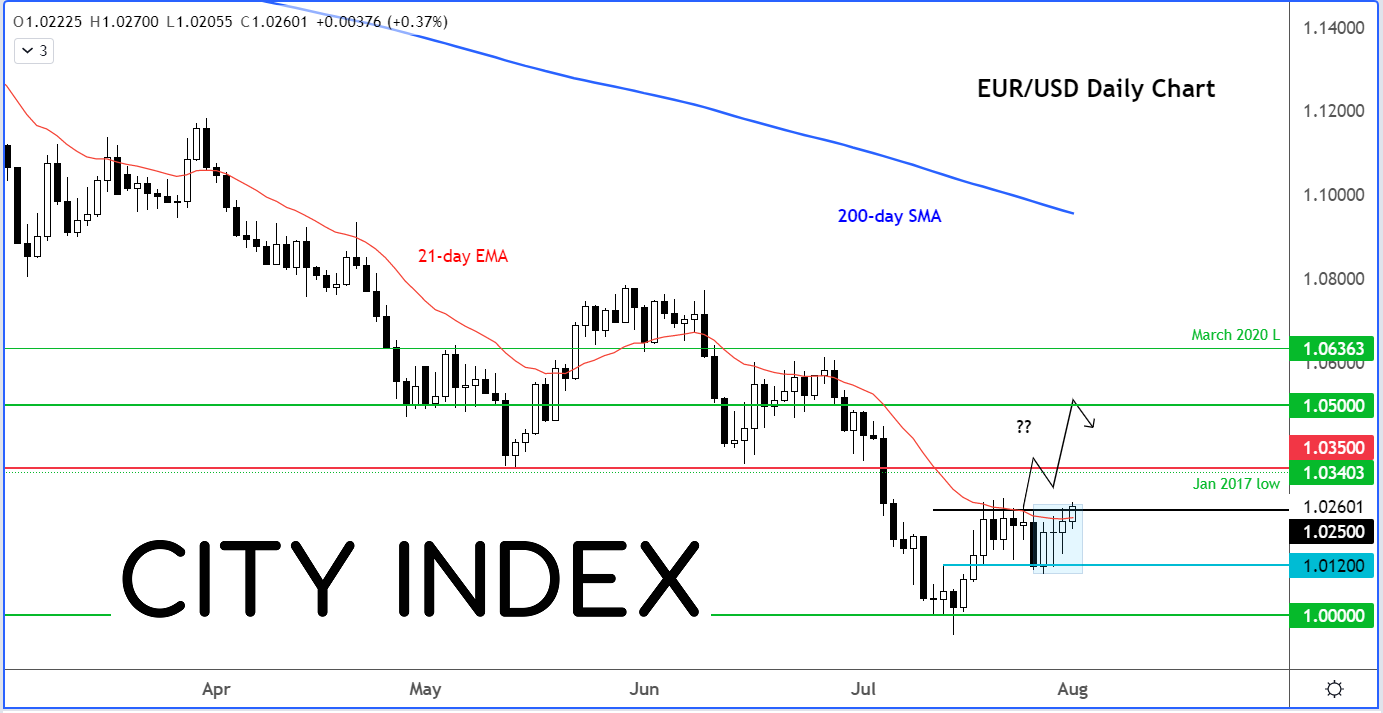 From the other side of the EUR/USD equation, the euro continued to struggle against other currencies earlier today, although it remains to be seen whether a potential rally in the EUR/USD will also lift other euro crosses.

Last week saw the euro continue to underperform foreign currencies, although it eked out a small gain versus the dollar, with the latter falling across the board. The EUR/USD showed some signs of life following the release mixed Eurozone data with growth figures from Spain, Italy and France all beating expectations. However, more recent data from the Eurozone has been poor, suggesting growth has weakened at the start of Q3. That trend continued at the start of this week with the latest German retail sales figure coming in at -1.6% this morning, following a gain of 1.2% the month before.

However, there is no sign of inflation turning lower in the eurozone – with CPI having just accelerated to a fresh record high, which means that consumers are facing even more pressure on their disposable incomes, potentially resulting into lower spending and weaker economic activity. Indeed, with there could be more inflation in Germany once government subsidies expire at the end of August. The ECB might have to now deliver another 50-basis point hike.

Still, while stagflation fears remain alive in the eurozone, much of the downside risks are already priced in for the euro, I would imagine. So, I still think there is more juice left in this EUR/USD recovery – especially in light of the further falls we have seen in US bond yields as a result of a welcome relief in prices paid in the manufacturing sector.

As before, I continue to expect the EUR/USD will climb further over the next few days, and re-test the old broken support zone around 1.0350. We just need to see a clean breakout above 1.0250 resistance today. There is also the potential for a rally beyond this level to 1.05 handle, but we will cross the bridge when we get there. One step at a time. Overall, I only expect to see moderate further upside for the EUR/USD exchange rate. This short-term bullish technical outlook will become invalid if key support at 1.0120 breaks on a daily closing basis.