During the Asian time zone earlier today, Australia released stronger economic data that gave a lift to AUD/NZD.  The new monthly CPI indicator for November showed that inflation increased from 6.9% in November to 7.3% in December. The higher inflation data helped to reassure investors that the RBA will hike rates by another 25bps when it meets on February 6th.  In addition, Australia released Retail Sales for November.  The print showed a MoM increase of 1.4% vs an expectation of only 0.6%.  This was the strongest increase since January 2022.  The October reading was also revised higher, from -0.2% to +0.4%.  Retail Sales now have been positive for the last 10 months.  This positive news for the Aussie comes after China had announced the end of its zero-Covid policy, thus reopening China’s economy.  Australia exports many products to China, so a reopening of China is good Australia as well.  One of the goods that China traditionally imports from Australia is coal.  However, a ban on Australia coal was put into place after the country (along with other countries) called for an investigation into the origins of Covid.  China recently has suggested a partial end of the ban of coal, another win for the Australia Dollar.

AUD/NZD had been moving higher during most of 2022.  Between the end of April and mid-September, price had been rising in an ascending wedge formation.  Expectations are that price will break lower out of an ascending wedge as price nears the apex.  However, AUD/NZD moved above the price pattern to a high of 1.1480, which proved to be a false breakout.  The pair moved back inside the wedge and moved lower.  The target for the break of an ascending wedge is a 100% retracement, which was 1.0825.  AUD/NZD moved to this level in less than two months and continued moving to a 2022 low of 1.0471 on December 16th. Since then, the AUD/NZD bounced to the 38.2% Fibonacci retracement level from the 2022 highs to lows near 1.0860 and has been hovering around that area for the last week. 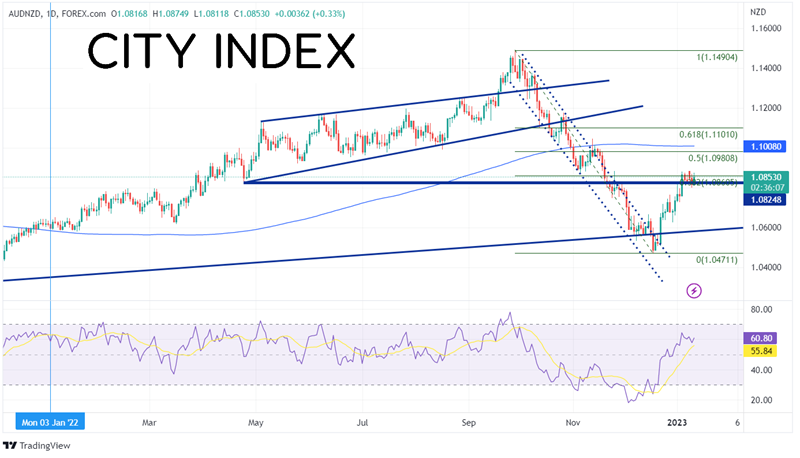 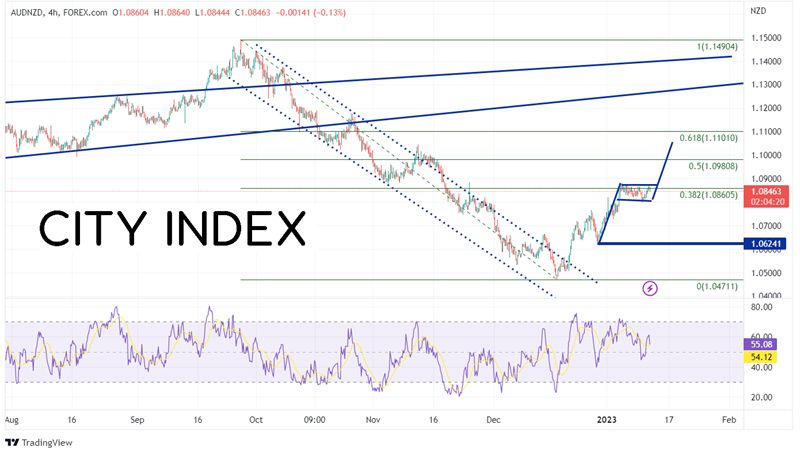 AUD/NZD has been moving higher since making 2022 lows on December 16th, 2022 at 1.0471.  Today, the pair got another boost as Australian economic data was stronger than expected.  Will AUD/NZD continue to move higher?  If the pair can break above the top of its current flag pattern, it may well be on its way to the flag target above 1.1000.