In this week’s edition, we are getting technical on S&P 500, gold, USD/CAD and AUD/NZD. So, there’s something for everyone.

The S&P 500 remains inside a bear trend, given those longer-term lower lows and lower highs, with the 200-day average now pointing lower and holding comfortably above the market. Old supports are turning into resistance. One such area is at around 3905, where the index had previously bounce from. But now that it has broken down, this is going to be the most important short-term resistance level to watch ahead of a busy week.

More on that later, but first let’s take a look at the daily chart of the S&P, below: 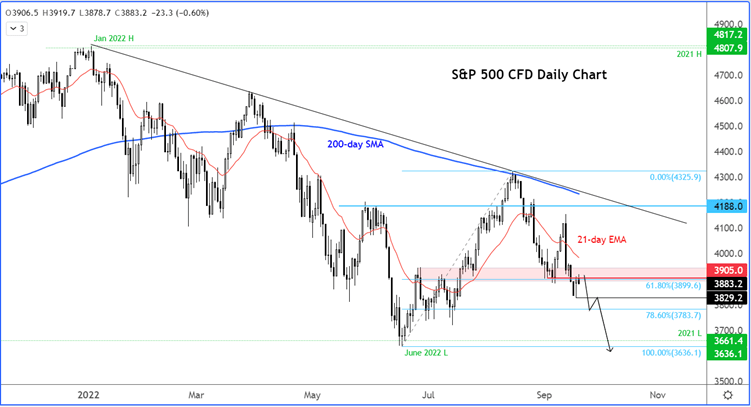 This week, there’s so much happening in terms of central bank meetings and interest rate hikes which should mean heightened volatility and plenty of trading opportunities. All eyes will be on the Fed on Wednesday and the current market pricing via the CME FedWatch tool is that there is an 82% chance of a 75-basis point hike, while a 1 percentage point rate hike is priced in at 18%. Thus, in the event the Fed opts for the latter, we would potentially see another big spike in the dollar and sell-off in risk assets.

Gold’s breakdown below last year’s low around $1676 means the path of least resistance remains to the downside. Even if we see a bit of a recovery towards $1700, this will not materially change the bearish outlook. Until we see a higher high above $1735, the sellers will remain in full control.

Today’s there are no major macro news to change the ongoing narrative. So, there are no surprises to see the stock markets struggle with EU stocks and US futures failing to hold their earlier gains. In FX, the EUR/USD was unable to move too far away from parity, before dipping below it. And gold drifted lower after last week’s breakdown as yields rose further ahead of more aggressive rate rises this week.

Thus, for traders, looking for short trades in gold and indices, and going long USD remain the trade that evidently continues works, at least for now. The USD/CAD broken out with a gain of 1.8% last week as investors looked forward to a hawkish Fed meeting this week. The path of least resistance is to the upside and could see this pair move towards and possibly beyond the 1.35 handle from here.

One of the reasons why the USD/CAD has been fairly stable compared to the other major currencies has been because of the Canadian economy holding its own relatively better than some of the other regions in the world. In addition, the sharp gains for crude oil earlier in the year also boosted the commodity dollar. However, with oil coming down sharply in recent months, this has made the CAD relatively less appearing the USD. The latter has also found renewed buying strength because of the sharp repricing of Fed rate hikes in response to last week’s inflation report.

The USD/CAD has broken key technical area in the 1.3200-1.3225 range, which had provided resistance in at least 3 occasions in recent months. But with this area having been broken, any dips here is likely to be supported

The path of least resistance will remain to the upside unless the USD/CAD goes back below that 1.3200-1.3225 area on a closing basis. If that happens, then the USD/CAD could drop back towards the point of origin of the breakout at around 1.3000-1.3050 area. 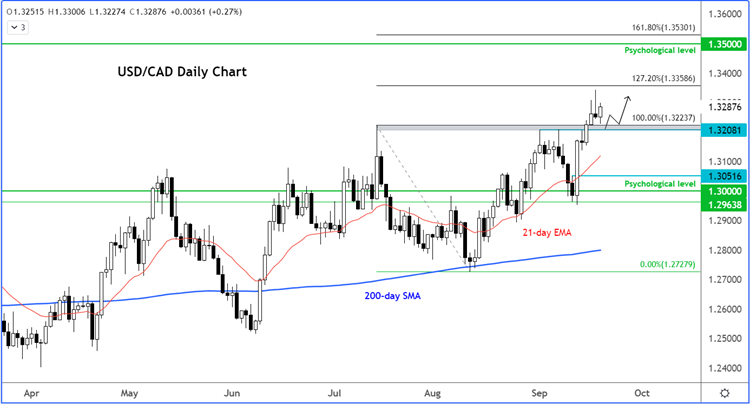 If you are looking for a strong trend but want to remove the USD out of the equation, then look no further than the AUD/NZD. This pair continues to break out to multi year highs amid increasing concerns about the health of the New Zealand economy and this year’s aggressive rate hikes from the RBA.

With the shorter-term 21-day exponential and longer-term 200-day simple moving averages both pointing higher and price comfortably holding above both, there is no subjectivity involved when we say this is a strong bullish trend.

While the trend could reverse at any time, we will be looking for dips to hold at former resistance levels. One such area is around 1.1250, where the popular currency cross had struggled to break through on several occasions in the last few weeks. But at the start of this week, it has surged through here, potentially paving the way for the high that was hit back in 2015 at just shy of the 1.15 handle. 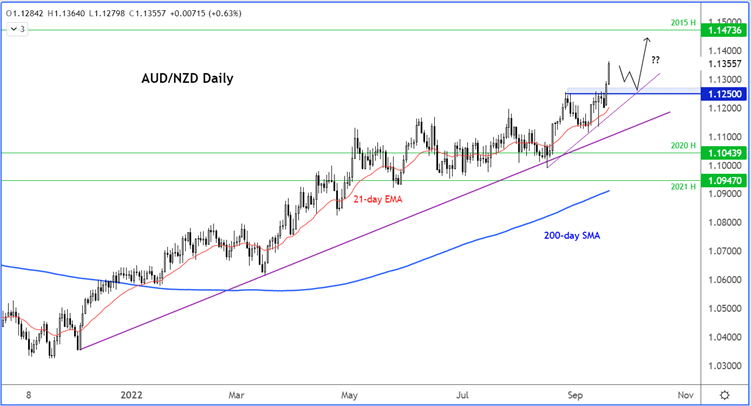