The SNB could surprise (again) with a larger than expected hike

The central bank entered ZIRP (zero interest rate policy) between 2011 – 2015 before switching to NIRP (negative interest rate policy) with a rate of -0.75%, where it remained until June this year. And with seemingly few paying attention, they not only hiked rates but came out swinging with a 50bp hike and sent shockwaves across currency markets. This quickly saw the yen strengthen as traders assumed the BOJ would be next to follow, but we’re still waiting and will likely be for some time. But the main point I am making is that the SNB are likely to hike again tomorrow, and it would be wise to at least be prepared for a larger hike than some expect.

A recent poll saw economists up their 50bp hike for the SNB to 75bp. But in light of Sweden’s Riksbank hiking by 100bp, wholesale prices in Germany exploding higher and the potential for the Fed to hike by 100bp, I’m not discounting the potential for the SNB to join to 100bp club. Besides, they hiked by 50bp when the consensus was for no change at all and have a track record with an element of surprise. Furthermore, the Swiss government upgraded 2022 CPI from 2.5% to 3%, and for 2023 from 1.4% to 2.3% - so perhaps they know something we don’t.

There are fewer finer examples of a strong bullish trend on a currency chart, than CHF/JPY right now. Momentum has been increasing during each impulse move higher, the moving averages are in ‘bullish sequence’ and fanning out, and prices are respecting the closest average as support. 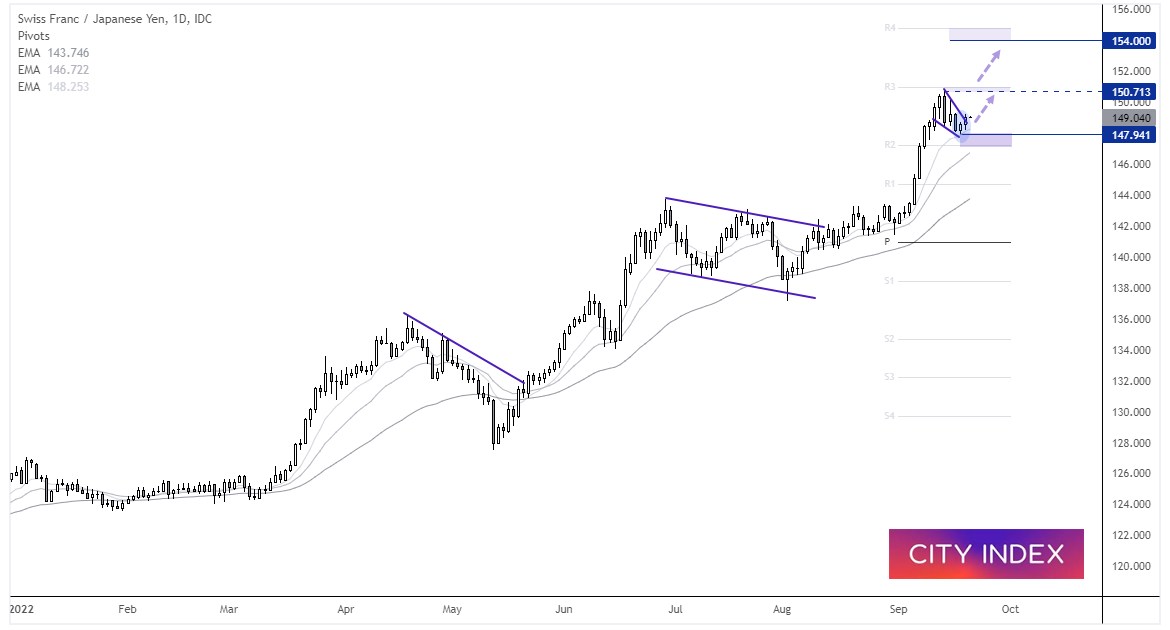 Prices have been coiling up within a falling wedge pattern (bullish in an uptrend) and potentially printed its swing low this week at the 10-day EMA. Furthermore, a 3-day bullish reversal pattern called a morning star has formed, so the bias remains bullish above this week’s low and for a move to the 150.71 high. A break above which brings 154 into focus.

However, even if prices break low we would still keep an eye out for a potential swing low, given the diverging policies between the SNB and BOJ.