US stocks are heading to a stronger open, rebounding after US Treasury Secretary Janet Yellen sent stocks sharply lower in the previous session.

Janet Yellen’s comment that interest rates may need to be hiked to prevent the US economy overheating inspired a tech led selloff. The Nasdaq closed -1.8%.

Yellen backtracking on her comments, in addition to strong PMI data from Europe is refocusing the markets on the economic recovery whilst looking past inflationary concerns. Attention will remain on earnings and data for further clues.

742k new private sector jobs were created in April, up firmly from the 565k in March as the economy reopens. However, they were slightly short of the 810k forecast. This sits with the market nicely. A beat could have lifted interest rate hike fears particularly after Yellen suggested rate hikes are on policy makers radar and as the Fed is so focused on jobs.

The survey will be published at 13:15 GMT and is expected to add to evidence that the US economy is firing up firmly on the reopen. The ISM services PMI is expected to show an acceleration in service sector activity from an already elevated in March of 63.7. The employment component of the report is considered a lead indicator for Friday’s non-farm payroll report. As such it will be watched closely.

Lyft is likely to be in focus after reporting upbeat earnings after the close yesterday and after it reiterated its goal of turning a profit by Q3.

Earnings are due from General Motors meaning that the automobile sector is likely to remain in focus.  Also, PayPal & Hilton Worldwide are due to report too and Uber after the close.

The S&P futures trade +0.4% ahead of the open, rebounding from -0.7% loss in the previous session. The pick up today has pulled the RSI out of oversold territory and it sits at neutral.

The recovery needs to break above the descending trend line dating back to late April at around its current levels of 4180. This could prove a tough level to crack as it is also the 20 & 50 EMA resistance on the 4 hour chart.  A break over this level could see the all tine high re-tested.

Failure to break back over 4185 will see the downtrend continue with 4120 the next target. 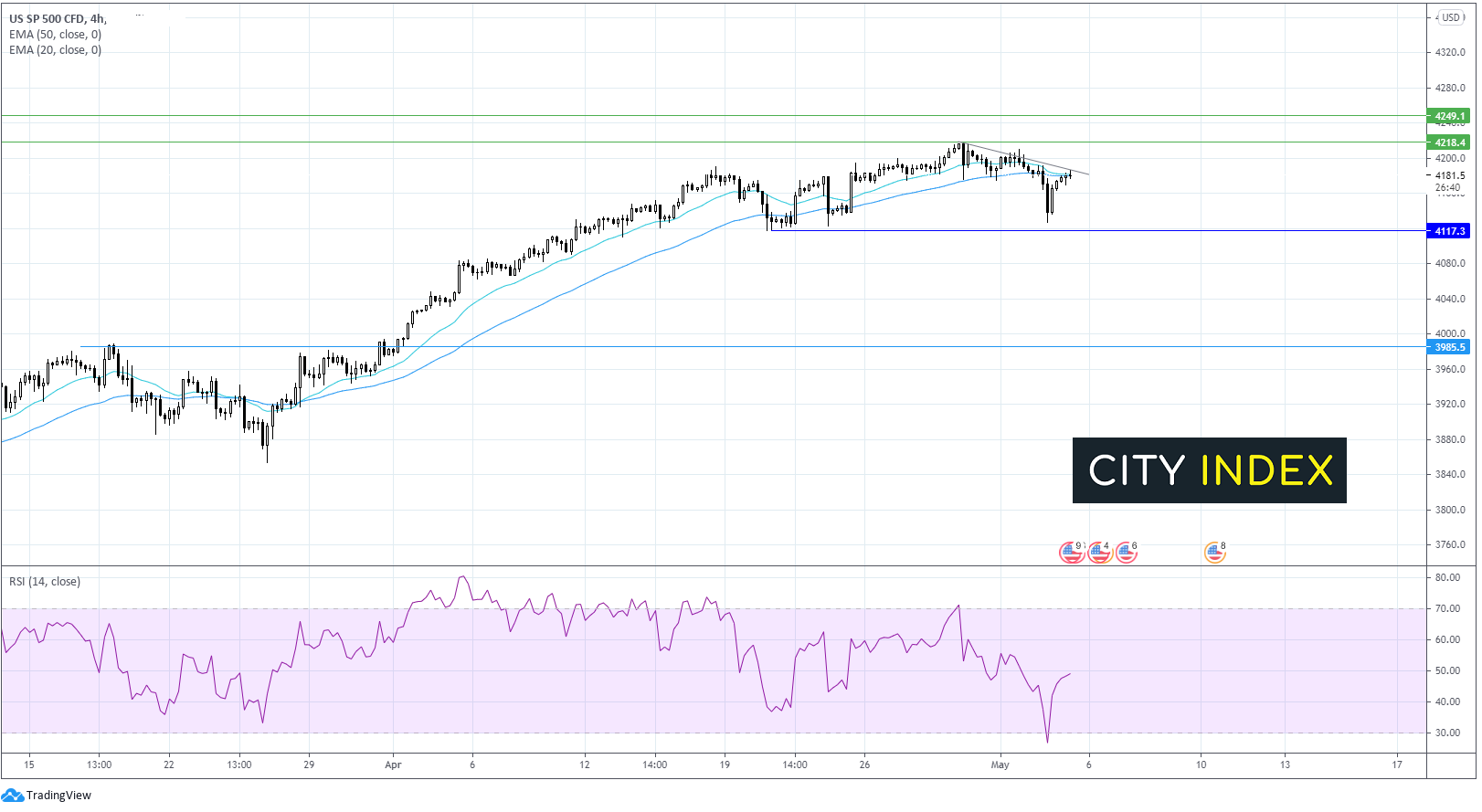 The US Dollar is edging lower giving back earlier gains. Janet Yellen’s rate hike comments sent the US Dollar higher on Tuesday.

EUR/USD trades flat despite upbeat Eurozone PMI data. Eurozone composite PMI printed at 53.8 in April, ahead of the preliminary 53.7 reading and up from March’s 53.2. Service sector activity also picked up, moving into expansionary territory despite ongoing lockdown restrictions in the bloc.

GBP/USD trades higher despite a lack of data. Investors are looking ahead to the BoE interest rate decision tomorrow. Could we see a more hawkish UK central bank?

Oil is extending gains for a third straight day. Oil surged almost 2.5% in the previous session ad=nd is up an additional 1%. Brent briefly reached $70 per barrel for the first time in two months.

Reopening optimism and a record crude drawdown are sending the price surging. The American Petroleum Institute data showed a draw of 7.68 million barrels in the week ending April 30. This was a significantly ahead of the 2.19 million drawdown expected and significantly down from the 4.31 million build recorded in the previous week.

As western economies reopen the demand for oil has picked up considerably. With holidays expected to begin in the coming weeks and the European commission easing travel restrictions for the key summer holiday period, demands in expected to continue rising.