Traders see continued rate hikes over the next year, despite concerns of a recession 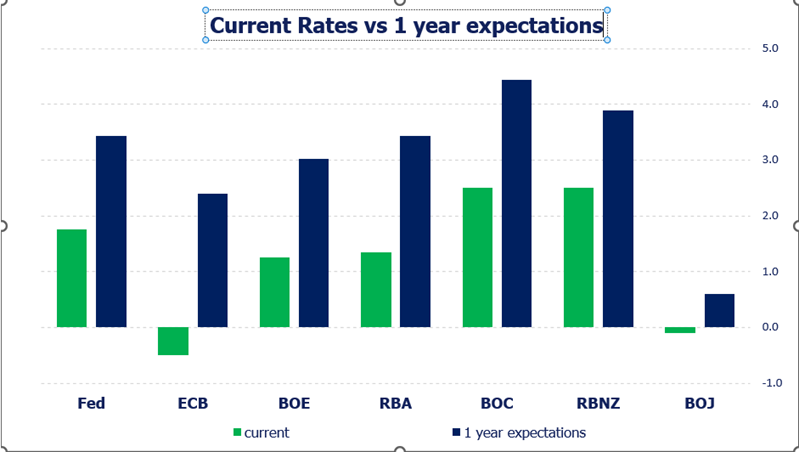 The ECB is the farthest behind in terms of rate hikes to slow inflation.  They have hiked rates exactly zero times since the pandemic began. Interest rates currently sit at -0.5%. However, at June’s ECB meeting, Christine Lagarde did pre-commit to hiking rates by 25bps at this week’s meeting.  Will it be enough?  There is some speculation that the ECB could hike 50bps.  However, even if the Committee hikes rates by 50bps, it would still only bring rates to 0.00%.  The June CPI reading was a new record high at 8.6% YoY.  Markets are expecting rates to be at 2.4% in 1 years’ time.

The BOJ is sitting with rates at -0.1%.  They also meet this week and are expected to keep rates unchanged.  However, Japan is one of the few countries dealing with very low inflation, which is the reason monetary policy so accommodative.  The May CPI reading for Japan sits at a 7.5 year high of 2.5%!  However, within 1 years’ time, markets are expecting rates to increase to 0.6%.  Could the BOJ increase rates and still avoid deflationary pressures?

Everything you need to know about the BOJ

The US Federal Reserve raised rates in June by 75bps to 1.75% and is expected to increase rates by another 75bps when it meets again next week.  After the most recent CPI reading of 9.1% YoY, markets began pricing in the chance of a 100bps rate hike.  However, since then, Fed officials have been on the wires saying that the market may be getting a little ahead of itself. Fed Chairman Powell has said that he is willing to increase rates to get inflation down, despite the chance of forcing the US economy into a recession. Will a second 75bps rate hike be enough to bring inflation down from 4-decade highs?  Markets see rates at 3.43% in 1 year.

The Bank of England meets next week, however the UK CPI report for June will be released on Wednesday.  Expectations for the print are an increase from 9.1% YoY in May to 9.3% YoY in June.  The BOE has been increasing rates at steady 25bps increments to bring the current rate to 1.25%.  They hoped the small, consistent rate hikes would lower inflation while keeping the UK out of a recession.  However, inflation continues to move higher.  BOE Governor Bailey said last week that there are a range of things on the table for the August meeting, and he did not want to pre-commit as to what they will do. Will the BOE hike by 50bps next week? Markets currently expect rates to be at 3.02% in 1 year.

The Bank of Canada has been one of the most aggressive in terms of raising rates.  Last week, the BOC hiked by 100bps from 1.5% to 2.5%!  BOC Governor Macklem said the reason for hiking 100bps is that front-loading tightening cycles tend to be followed by softer landings. On Wednesday, Canada will release June CPI.  Expectations are for an increase from 7.7% YoY in May to 8.4% YoY in June! Will the 100bps increase in rates help to lower inflation in July? Or will another large rate hike be needed at the next BOC meeting.  Markets are currently pricing in a 1-year rates at 4.44%, nearly 200bps higher than they are currently.

Everything you need to know about the BOC

The RBA and the RBNZ are in similar situations as many of the other large economy countries around the world:  High inflation with the possibility of a recession ahead.  The RBA currently has rates set at 1.35% and 1-year expectations are for 3.44%.  The RBNZ currently has the cash rate at 2.5%, with a 1-year expectation of 3.89%.

Will inflation continue to rise and tip the world economy into a recession?  Or will central banks be able to raise rates fast enough to keep higher inflation at bay, while simultaneously keeping the world out of a recession?  Central Banks must walk a thin link between inflation and recession right now.  Watch the 1-year rate expectations between central banks.  The difference between 2 countries expected rates is a powerful tool fx traders can use to determine the next direction of fx rates!