In this week’s edition, we are getting technical on USD/JPY, DAX and WTI crude oil

The USD/JPY broke out on Monday above its short-term range that had been capped by 140.00 to 140.00 range. But in the first half of Tuesday’s session, rates were down again as traders sold the rally around 142.30, the underside of the broken bullish trend that stretches back to the first quarter. It will be interesting to see which direction the UJ will break from here. A move north of 142.30 resistance would be bullish as it would re-establish that broken long-term bullish trend line. In this scenario, we could see the UJ head towards the next resistance in the 145.00 to 145.10 range, before deciding on its next move.

On the other hand, if the abovementioned 140.00 to 140.80 support area eventually gives way, then this would pave the way for a potential retest of the recent low at 137.67.

Despite the recent weakness in the USD/JPY, the macro backdrop has not changed significantly, with the Bank of Japan continuing with its yield curve control policy while the Fed continues to hike rates, albeit the pace might well slow down amid signs of peak inflation in the US. 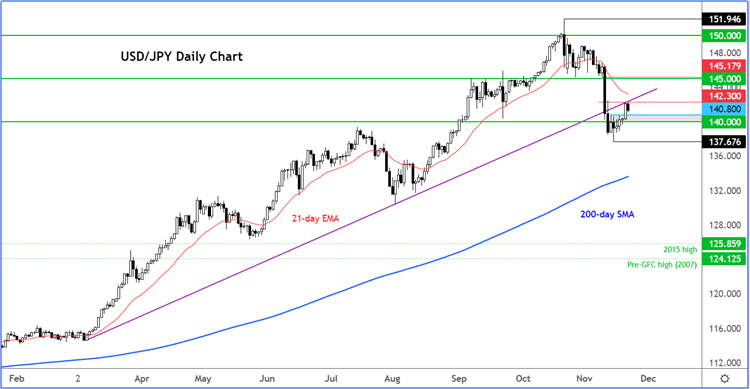 Markets have not been in a great shape in terms of volatility of late with lots of sideways action in both FX and indices, as investors digest conflicting macro signals. On the one hand, they are trying to remain as hopeful as possible that inflation has peaked and that the days of further sharp rate increases are numbered. The possibility that the US Federal Reserve is about to tilt to a more dovish stance has raised hopes that the worst of the sell-off for risk assets is over. But on the other hand, they will be happy not to take excessive risk amid concerns over China and Europe. Traders are also concerned by continued weakness in crypto prices in the wake of FTX’s collapse. With this also being a quiet day and week in terms of macro data, they are understandably keen to proceed with caution.

This intensiveness is reflected across the major indices, such as the German DAX index which has been taking baby steps to consolidate its recent sharp gains, but the apparent lack of desire to kick on from here means there is the risk the rally could reverse. Clearly, a lot of people missed out on the big rally a couple of weeks ago, and those that want to get onboard are probably waiting for a sizeable retracement, which hasn’t happened yet. Perhaps, the would-be bulls might be eyeing an entry around the 200-day average and support in the 13555 to 13695 range.

The bears meanwhile are in hibernation. Lots of resistances have broken down, reducing the appeal of shorting this market. They need to see a short-term lower low in order to at least tempt some of them back in. So, a potential break below recent low at 14123 make pave the way for a potential drop to that abovementioned support range at 13555 to 13695 area. But if we then go below that area, this would be a significant bearish development. We will cross that bridge if and when we get there. For now, the bears have very little to work with. 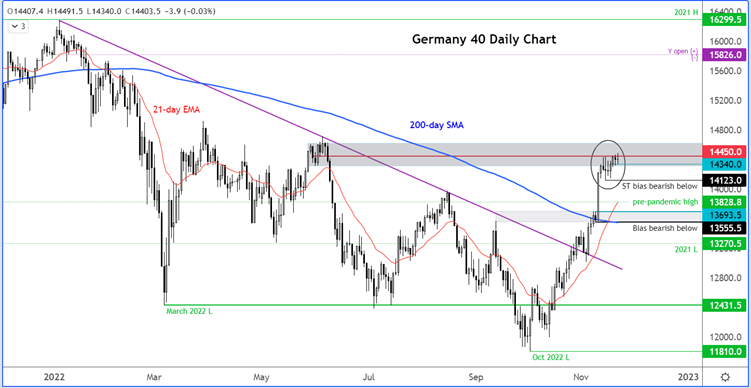 Oil prices managed to fully recover their earlier sharp sell-off on Monday after briefly breaking the lows they had created back in September. The +5% drop initially was due to a report on the Wall Street Journal that said the OPEC+ will be discussing the possibility of increasing production by 500 thousand barrels per day at their December 4 meeting. However, oil prices then surged back once the OPEC denied that report, leaving behind a long legged doji candle and a possible reversal formation on oil prices. The fact that WTI’s stay below the September low was a brief one, means it has created a possible false breakdown or double bottom reversal pattern. But for this pattern to be confirmed, prices will now need to show us some confirmation signals such as the breakdown of the near-term resistance levels that are now approaching.

Unless we see genuine signs that this was indeed a bottoming signal, proceed with extra care if you are bullish or long. The longer-term trend has in recent months turned bearish, with prices making lower lows and lower highs.  In fact, WTI had already entered a large band of resistance at the time of writing, between $81.20ish to $83.55ish. The bulls will need to see prices clear this area and hold there on a closing basis. But if we get a rejection and oil prices fall back below today’s open and below $80, then that would put the bulls in a spot of bother. 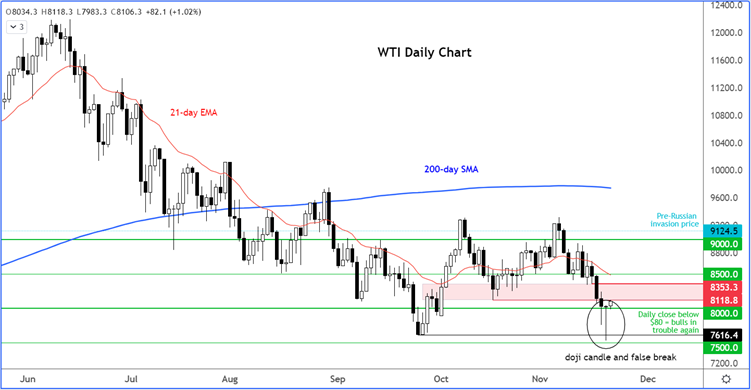