By :
Fiona Cincotta
,  Market Analyst
The pound extended losses on Tuesday as it moved towards $1.29. The pound shrugged off news that unemployment in the UK dropped to 3.8%, its lowest level in 44 years. Instead pound traders focused on the fact that employment also slowed, with 99,000 new jobs created, well below the 135,00 forecast and wage growth momentum slowed. Wage growth, a closely watched component of the jobs report showed that income growth slowed to 3.2%, down from 3.5%.

Overall the labour market has remained buoyant amid lingering Brexit uncertainty. This is because firms have preferred to invest in human resources which are more easily disposed of should the economy take a turn for the worse. What today’s report tells us is that the month that Brexit was due to occur, British firms created fewer jobs and were not as willing to pay higher wages. There was nothing in this latest jobs report to pressurise the Bank of England to raise interest rates. As a result, and amid reports that Theresa May is on the verge of ditching talks with Labour, the pound sunk. 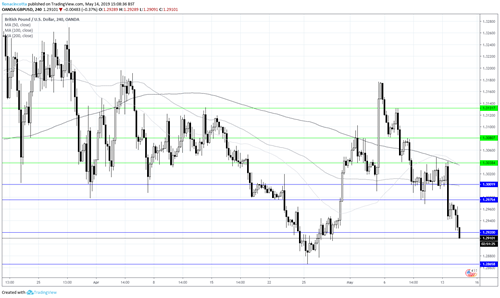