Welcome to another edition of Forex Friday, a weekly report in which we discuss selected currency themes mainly from a macro viewpoint, but we also throw in a pinch of technical analysis here and there.

In this week’s edition, we discuss the dollar, pound, euro, gold, and look forward to the week ahead.

Dollar rises from the ashes

WHAT a turned around! It is fair to say the US jobs report caught many people by surprise given the weaker leading indicators we have had earlier in the week in the form of ADP and employment components of the ISM PMIs. Anyway, the big beat on the employment report has raised speculation the Fed is going to tighten rates by 25 basis points in March and potentially another 25 bps in May, before pausing.  The Fed has to maintain a contractionary monetary policy longer, in order to dampen inflationary pressures that could arise from a tighter labour market. That’s what investors are probably thinking today at the conclusion of what has been a very volatile week.

The probability of these hikes has risen to almost 100% and 57%, respectively. Earlier in the day, the market was only 80% confident of a 25-bps hike next month, while the odds of an additional hike in May was less than one-thirds. That’s according to the CME’s FedWatch tool. The dollar’s comeback has seen precious metals plunge, while currencies where the central bank is likely to be more dovish than the Fed, such as the GBP, have sold off heavily. 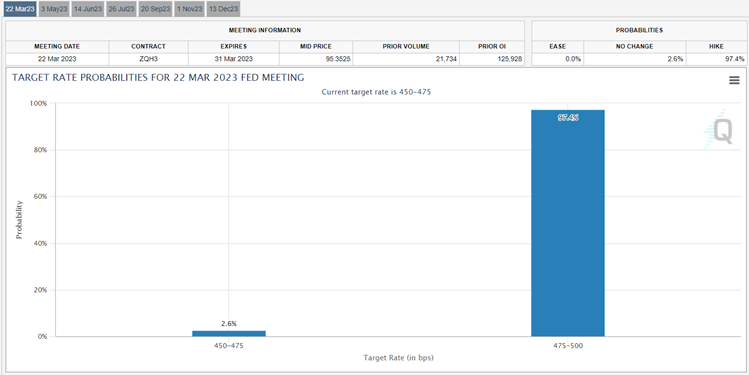 Precious metals have plummeted in response to the much stronger-than-expected US non-farm payrolls report that was released earlier. The sell-off confirmed the validity of the bearish signals we got on Thursday when both metals slumped after being higher initially. With the dollar strengthening, and metals weakening, there has been no desire for the buyers to be tempted by this sell-off.

The reversal come after both metals put in a solid performance in the last few months amid growing expectations that the Fed would pause its hiking cycle on signs inflation was peaking and economy weakening. But those expectations have now been revised somewhat and bond yields have responded by going higher.

The path of least resistance is now to the downside for gold once again, until the dollar tops out. 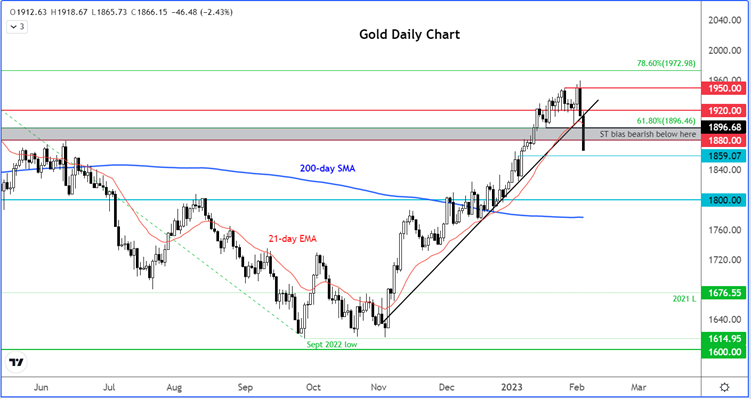 GBP/USD turns lower on the year

After two days of central bank bonanza and big tech earnings results, the nonfarm payrolls report caused even more volatility in the markets. The GBP/USD has been dealt a double whammy. Traders considered the BoE to be the most dovish of the three central banks.

The Bank of England conformed to market expectations and hiked interest rates by 50 basis points to 4.00% in a 7-2 vote, as expected, on Thursday. In response, the GBP/USD has fallen off noticeably, after initially reaching almost 1.24 handle. At below 1.21 today, the cable is about to turn negative on the year. More pain likely to follow thanks to a weak UK macro backdrop compared to the US.

The BoE removed a key sentence in the policy statement on Thursday. It said “if” there are more persistent price pressures then “further tightening will be required". The line that had previously read “it will respond forcefully” on inflation, was removed. BoE Governor was quite dovish at the press conference.

The GBP/USD could be heading back to 1.20 and possibly lower in light of the events that happened this week. 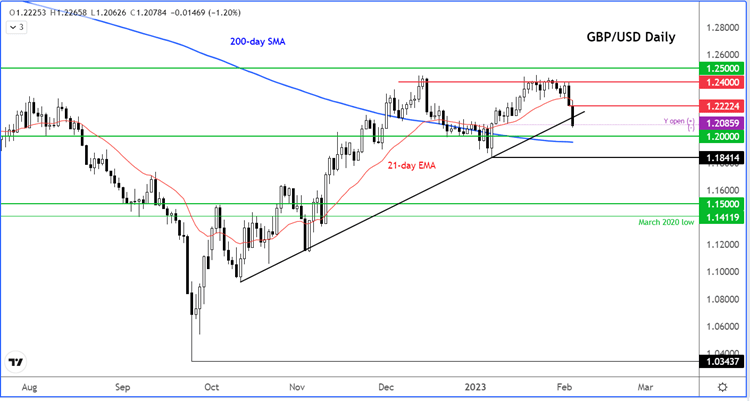 EUR/GBP likely to rise further amid

While both the ECB and BoE raised interest rates by 50 basis points, the BoE downwardly revised its inflation forecast for this year and removed the more hawkish elements of the statement, hinting at a 25-bps hike in March.  Meanwhile, the ECB hiked by 50 basis points and said that the disinflationary process hadn’t started and hinted to another 50-bps hike in March. This should keep the EUR/GBP supported on the dips. 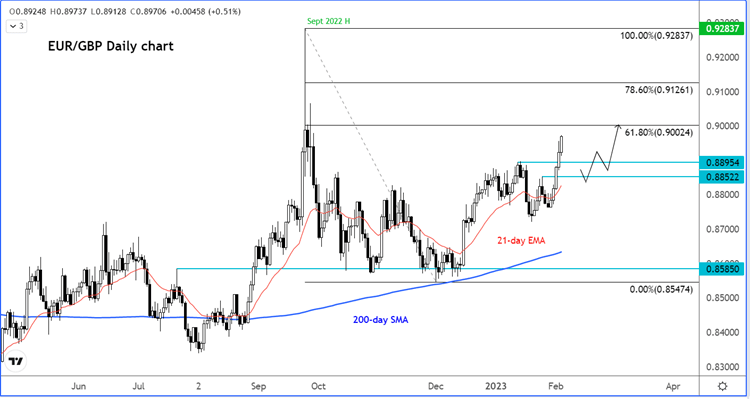 The RBA was among the first major central banks to slow down the pace of its hiking. It has raised the benchmark interest rate by 25 basis points at each of its previous 3 meetings. Speculation was growing that the RBA would pause its hiking, but the surprise jump in CPI to 8.4% from 7.3% suggests another 25 bp hike could be on the cards.

The Bank of England’s dovish 50 basis point hike weighed on the pound, but the central bank now thinks the economic downturn will be milder than previously expected. We will have both the monthly and quarterly GDP prints to provide us a snapshot of the economy, as well as construction output, industrial production and a few other economic indicators.

The University of Michigan’s consumer sentiment and inflation expectations surveys have been closely monitored in recent months, as investors have tried to front-run the Fed in anticipating policy changes. The data should move the dollar, gold and stock markets sharply if we see significant deviation from expectations.

Is gold set for a ‘sympathy bounce’ towards 1900?
By:
Matt Simpson

Powell continues to be “less hawkish” in Economic Club conversation
By: