Fed speakers out in force with more hawkish tone; USD/JPY

Yesterday, US Federal Reserve board members were out in force discussing how the Fed is not done raising rates yet!  The Fed’s Evans said that a 50bps rate hike would be a reasonable assessment for the September policy meeting if inflation does not improve.  He also said that a 75bps is ok.  In addition, the Fed’s Daly said that the Fed is nowhere near finished with the inflation fight.  Also, Bullard began yesterday by saying that the Fed is committed to the inflation target and needs to get to restrictive territory on rates.  Earlier today, he continued by saying that rates will have to be higher for longer to get inflation to come down in a convincing way.  Expect more of the hawkish rhetoric today when Harker, Daly, Barkin, and Kashkari speak!

As a result of the hawkish tone that Fed members have been taking, yields have move higher, with US 10-year yields posting a 6.8% gain yesterday, its largest move higher since March 2020.  Yields had been moving lower since posting highs of 3.497% on June 14th.  On July 28th, yields broke through the neckline of a head and shoulders topping pattern near 2.706%, indicating yields were ready to move lower.  However, after yesterday’s Fed speak, yields formed  a bullish engulfing candlestick pattern, pushing yields higher, back through the neckline and negating the pattern.  Today, there is some follow through, with yields reaching an intraday high of 2.801% thus far.  First resistance in 10-year yields is at the highs from July 29th near 2.827%.  Above there, yields can move to the 38.2% Fibonacci retracement from the June 14th highs to yesterday’s lows near 2.89% and then the 50% retracement from the same timeframe near 3.006%.  First support is at yesterday’s low of 2.516%.  Below there, yields can fall to the 61.8% Fibonacci retracement level from the lows of March 7th to the highs of June 14th, near 2.367% and the horizontal support at 2.063%. The move in yields is influencing USD/JPY. Notice the correlation coefficient between USD/JPY and US 10-year yields is +0.78.  A reading of +0.80 is considered a strong correlation, however it is moving in the right direction and may soon be at +0.80.  (On a 240-minute timeframe the correlation coefficient is +0.87!).  USD/JPY has formed a descending wedge, similar to the one from May. The bottom trendline of the current descending wedge was drawn at the 50% retracement level from the lows of May 24th to the highs of July 14th.  This was to show symmetry to the earlier wedge, which retraced the same amount from the previous move. On Monday, the pair broke through the bottom trendline of the wedge.  Yesterday, USD/JPY spiked though the 61.8% Fibonacci retracement level of the same timeframe and then closed higher, back in the wedge.  Could that have been a false breakdown?  First resistance is at the lows of July near 135.57.  Just above there is the top, downward sloping trendline of the wedge near 136.40 and then the highs from July 14th at 139.91.  First support is at yesterday’s low of 130.91, then the low May 24th at 126.36.  Below there is horizontal support at 125.11. 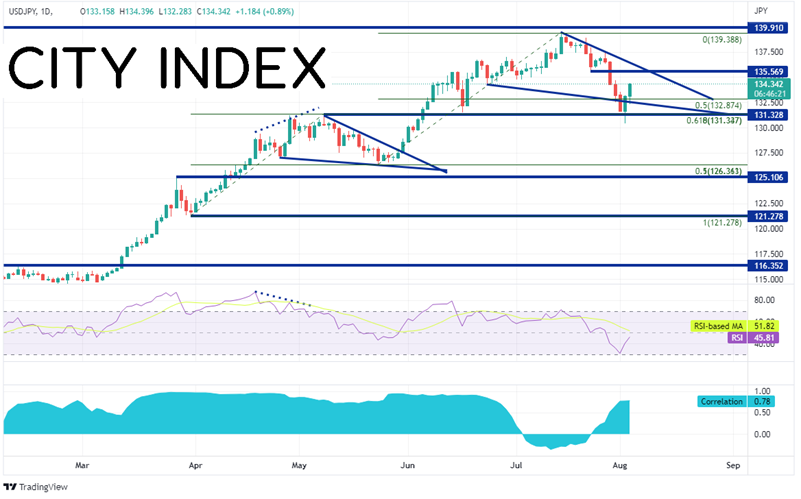 With hawkish Fed speakers yesterday, which seem to be continuing today, US 10-year yields have been on the rise. As a result, the correlation between USD/JPY and 10-year yields has come back in line and is almost in “strong” territory on the daily timeframe. (It’s already strong on a 240-minute timeframe.)  Will the 2 assets continue higher?  If the descending wedge in USD/JPY plays out like the one in May, the pair could be making new highs soon!