Core PCE not as bad as feared. But how much does it matter?

The US Core PCE Price Index has traditionally been known as the Fed’s favorite measure of inflation. Today, the US released the print for May with a reading of 4.7% YoY vs an expectation of 4.8% YoY and an April reading of 4.9% YoY. This is the third month in a row of declines for the reading and the lowest since November 2021. In addition, the headline PCE Price Index was 6.3% YoY vs a previous reading of 6.3% YoY.

So, is the Core PCE Price Index giving us a sign that we have had peak inflation?  Fed Chairman Powell said in the press conference following the last FOMC meeting that the main reason for hiking interest rates 75bps, rather than the expected 50bps, was because of the 8.6% YoY CPI reading, as well as the higher than expected Michigan Inflation Expectations prints. This leads us to believe that although the Core PCE is still in the mix as one of the measures the Fed will use to determine inflation levels, it may not be the holy grail of inflation readings as it was in the past.

The initial reaction for the US Dollar Index was to pullback on the data release.  Within the first 15 minutes after, the DXY pulled back from 105.50 down to 105.30. 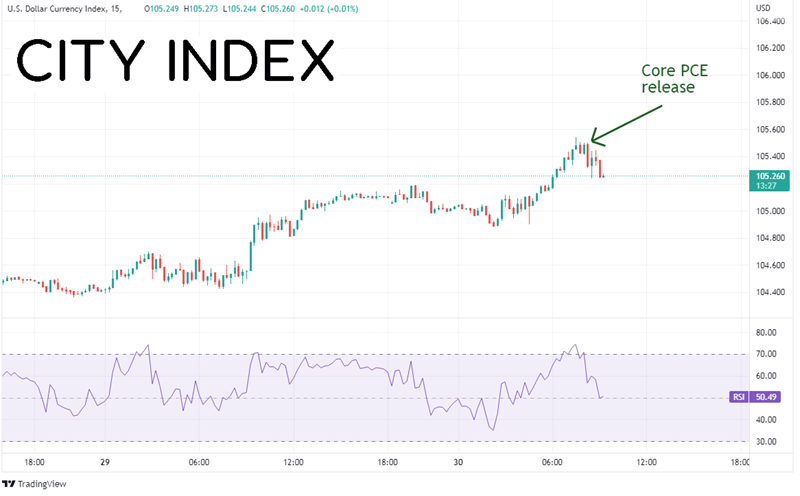 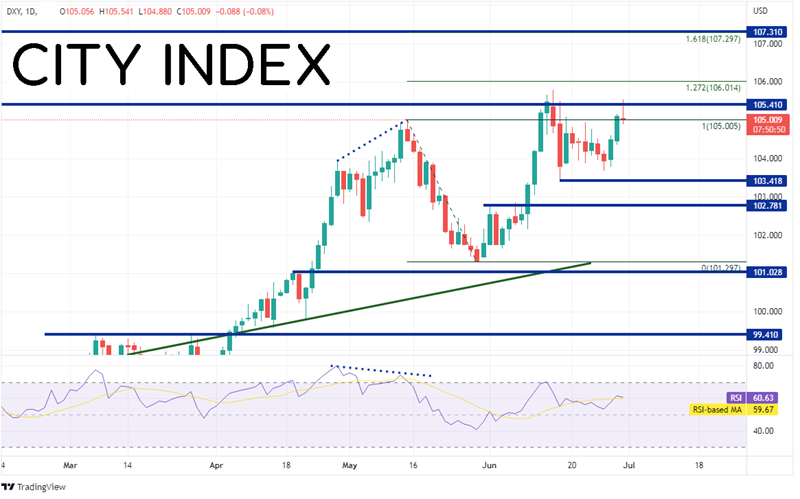 The Euro makes of 57% of the US Dollar Index.  Therefore, it’s not a surprise that when the DXY moves in one direction, EUR/USD moves in the opposite direction.  EUR/USD has been moving lower over the last 3 days as the US Dollar Index was moving higher.  The pair is trying to test the lows from May 13th at 1.0349, just 9 pips from its lowest level since December 2002. If the pair does continue lower, support is at the 127.2% and 161.8% Fibonacci extensions from the lows of May 13th to the highs of May 30th at 1.0234 and 1.0084, respectively.  However, if EUR/USD moves higher, first resistance is at the highs from June 27th and the downward sloping trendline (green) near 1.0615.  Just above there is long-term horizontal resistance at 1.0536, then the highs from May 30th at 1.0784. 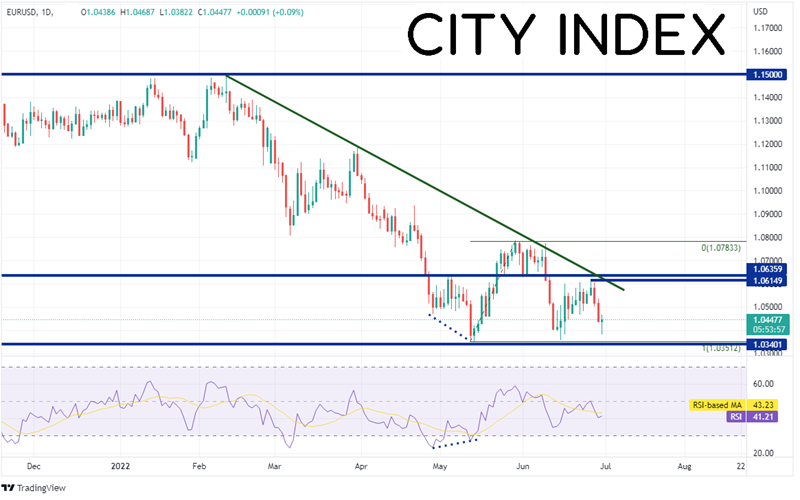 US Core PCE was released today and it was softer than expected.  Will it matter to the Fed?  It probably won’t matter in isolation, as the Fed is now looking at a number of inflation data points to help determine the next direction for inflation in the US.