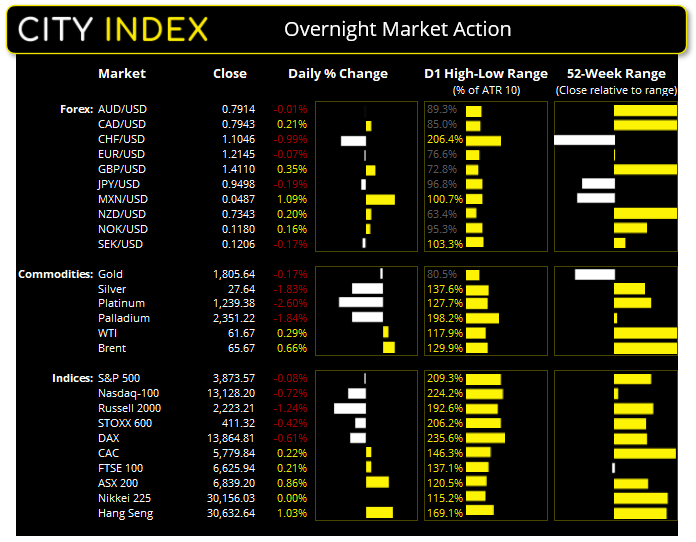 
It was a wild ride for stock market indices overnight with major benchmarks falling in tandem from the get-go. Volatility was high with daily ranges around 200% of a typical days trading for US indices and the Dax.

The latest trigger appeared to be from cryptocurrencies which were aggressively lower, forcing leveraged traders to liquidate assets to cover margin calls. Equity markets were already under pressure from fast-rising bond yields but the sell-off in crypto was the blow that accelerated the downside for indices. With Bitcoin breaking above $50k earlier this week, investors are once again questioning its ‘value’ at such dizzy heights. Then news that a major crypto exchange had halted withdrawals in Bitcoin and Ethereum lit a match under an already fragile market.

Still, the sell-off was not to last as Fed Chair Jerome Powell came to the rescue to send indices soaring back into the close. Wall Street recouped all of its earlier losses and left a series of bullish ‘buying’ tails (low wicks) in its wake.

Powell testifies to congress: Nothing to see here…

In his first testimony to the Democratic-led congress, Jerome Powell aimed to soothe concerns that the Fed’s ultra-loose monetary policies were the main cause behind asset price inflation, and that high inflation is not on the horizon. The Fed’s focus, according to Powell, should be on the economic recovery which is “uneven and far from complete” and that policy should stay loose to help recoup the 10 million jobs that have evaporated this past year. Oh, and the main driver for higher assets is a bet on an economic recovery and nothing to do with the Fed’s loose policy.

Whether you agree with Powell or not, his message is clear. Low rates are here to stay, inflation is no concern, so expect assets to remain supported outside of a black swan event.

The swiss franc continued to unravel across the board and was the weakest major overnight. We noted in last week’s COT report (Commitment of trader’s) that large speculators had reduced their net-long exposure by over 13%, just after it hit a multi-year high against the yen. Given the magnitude of recent Swiss franc weakness, we suspect remaining longs have been stopped out and likely reverted to short exposure. Whichever way you look at it, few want to be holding CHF right now, irrespective of its ‘safe-haven’ status. Bulls are long gone.

GBP/CHF was the strongest performer (and produced a textbook bullish breakout in line with yesterday’s ‘European Open’ report) and rallied an impressive 200% of its ATR (average true range). EUR/CHF rallied nearly 1%, or 300% of its ATR and CHF/JPY was the weakest pair and continues to fall in line with our longer-term bearish bias.

GBP/USD closed above 1.4100 thanks to Boris Johnson’s plan to unlock lockdown. But, as Joe Perry points out, the plan raises more questions than answers.

EUR/USD has so far failed to confirm its inverted head and shoulders pattern mentioned in yesterday’s report yet remains anchored to recent highs, so hope for a bullish breakout remain whilst bearish volatility hibernates.

AUD/NZD in focus around RBNZ and AU data

Technically, AUD/NZD looks appealing for a daring swing trade short. But for that to get moving in our favour today, we would likely need to see weak construction and soft wage growth from alongside a less-dovish-than-expected RBNZ meeting today. Stranger things have happened.

The daily chart has produced some excellent swings over recent months, and its recent swing higher has paused beneath prior highs around 1.0843 and produced a bearish engulfing / bearish hammer and spinning top Doji. That it has failed to re-test prior highs is encouraging, as is the bearish divergence which has formed on the RSI (2). 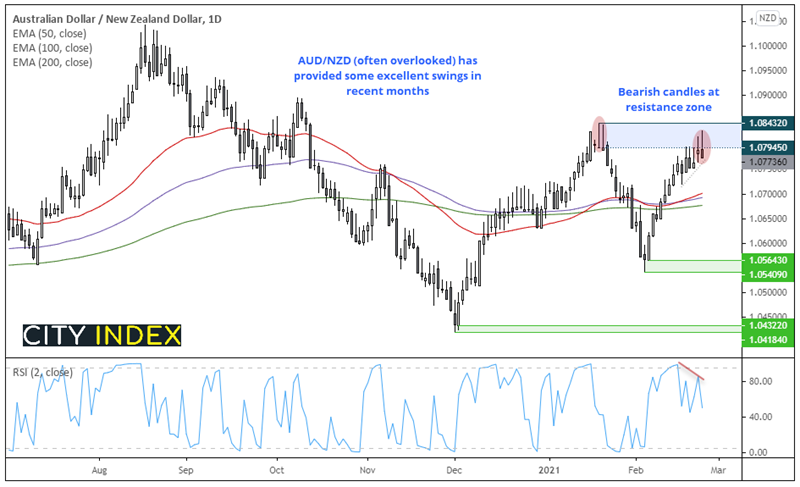 View more
Reddit stocks: what meme stocks are trending?
USD/JPY heading to 130?
How to trade the flag pattern
Disney vs Netflix: Who is winning the streaming war?
ASX200 Afternoon Report August 11th 2022
European Open: DAX considers its next breakout, US PPI in focus