Are commodity currencies poised for a big 2022?

By :
Matt Simpson
,  Market Analyst
This article is part of our 2022 Global Market Outlook collection, where we highlight the key themes, trends, and levels to watch on our most traded products. Please visit our 2022 Outlook hub page to view them all.

2021 has not turned out to be great year for commodity currencies, with AUD/USD down around -7.5% year to date, NZD/USD is off by -5.5% and the USD/CAD is on track for a mere 0.4% gain as of writing in mid-December. Calls for the commodity super cycle have died down to a whisper, but we live in hope that 2022 will make up for the disappointment of 2021. Besides, all three currencies display strong clues that they saw major lows in 2020 at the height of the pandemic, which means this year’s underperformance could simply be a retracement against a larger bullish cycle. 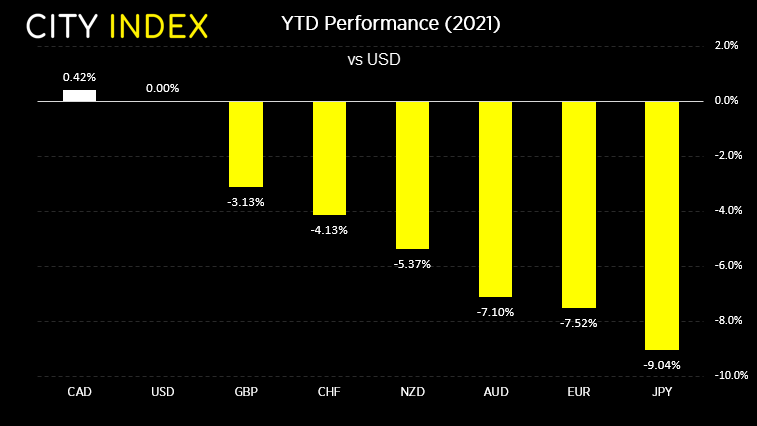 Will inflation spark a race to the top?

An obvious theme to consider next year is inflation because, if it remains rampant whilst demand remains strong, it creates a strong case for commodities to rise in aggregate and provide a tailwind for currencies such as AUD, NZD and CAD. However, it also likely creates a hawkish case for the Fed which means central banks could move in lockstep over a rate-hike cycle. And with the Fed in the driving seat when it comes to monetary policy, it also puts pressure on other central banks to follow suit.

And under this scenario, it could simply come down to interest rate differentials and their perceived future path as to how well the respective currencies would then perform. Closer analysis of domestic and relative fundamentals would then help decipher which one will outperform their peers.

Output gaps attempt to inform us how an economy is performing relative to its maximum potential. In simple terms, a number above zero tells us the economy is running hot whilst a negative number tells us it is running cold.

Of course, there is more to it than that and they are far from perfect, but these output gap forecasts by the IMF (International Monetary Fund) provide a quick glimpse of where things could be headed. And it appears to be a year of economic outperformance. Even if we wouldn’t hang our hats on these numbers, they could allow us to tell which central banks may tighten first. 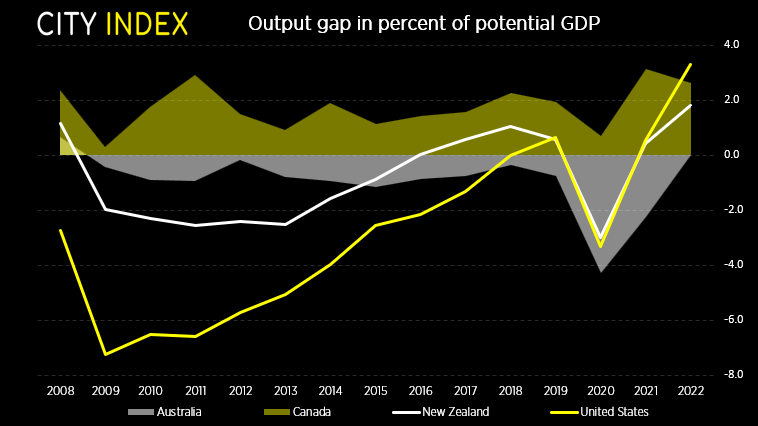 We know the Fed is reducing their balance sheet which itself a form of policy tightening. And at the time of writing it could increase their pace of tapering further and begin raising rates next year. With that in mind we can use the output gaps to rank in order how commodity currencies could fare next year, relative to the US dollar.

With that said, we need to factor in a hawkish Fed and its tightening cycle which could be bearish for commodity FX initially before the US dollar hype fades and focus shifts to cyclicals, allowing commodity FX to then rally.

RBA – the most ‘reserved’ of them all

The Reserve Bank of Australia has been very laid back in recent years regarding monetary policy decisions. It was the last central bank to implement QE and is clearly in no hurry to wrap it up and begin hiking rates. Currently RBA policymakers have their first hike pencilled in for 2024 (or 2023 at a push). We doubt they will take that long but they are clearly in no rush to admit this, which is why we suspect AUD could underperform relative to NZD and CAD in 2022, whilst still receiving a bullish tailwind from the global rebound expected next year. 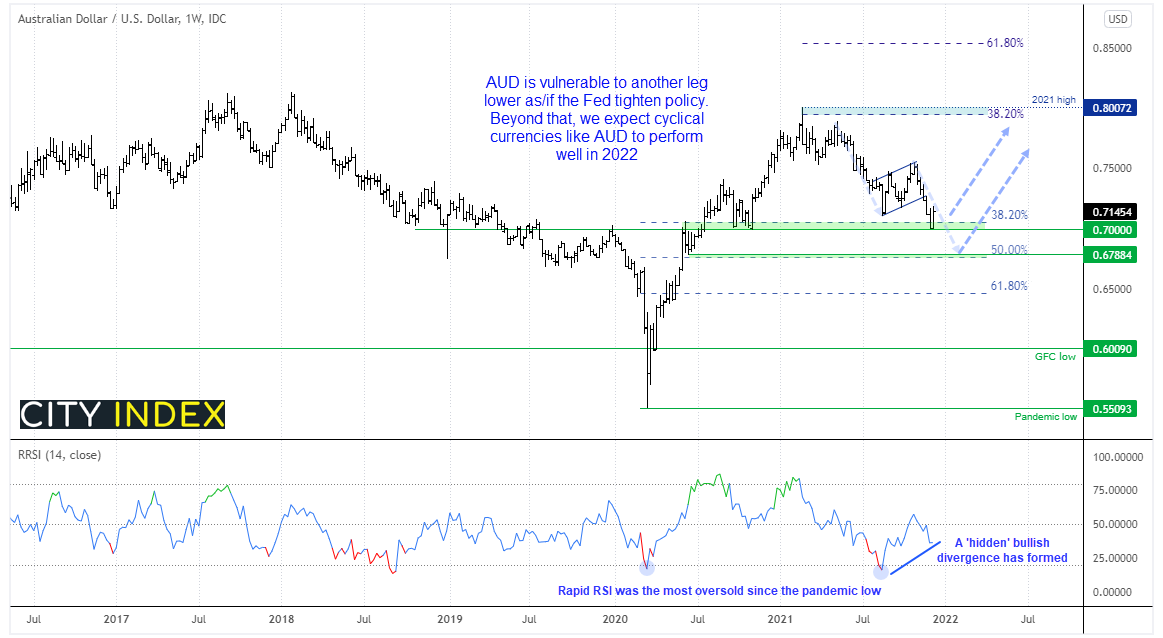 The Australian dollar has spent the best part of 2021 retracing against the rally from the March 2020 low. And it’s worth noting that the infamous covid 2020 low produced a ‘V-bottom’ and false-break of the GFC (global financial crisis) low. Given V-bottoms usually mark significant turning points, we doubt AUD will be going near 55c again any time soon.

We can see on the weekly chart the AUD/USD is trying to find support around 70c and its 38.2% Fibonacci ratio. Perhaps that is an interim low, but we’ll allow for another dip towards 0.6750 / 50% as the initial dollar bulls case continues around the Fed. Besides, it may still be trading a bear-flag breakout which projects a target around 0.6788 / 50% retracement.

Read our guide on the Australian Dollar

But the weekly Rapid RSI (created by Harmonic Elliot Wave forecaster Ian Copsey) shows a momentum low occurred in August, and the indicator had not been that overbought since the pandemic low. A bullish divergence is also forming so we suspect this retracement is becoming long in the tooth. And if 70c manages to hold early next year we’ll be more convinced it was the actual corrective low, and a 38.2% projection from it provides an initial target just below 80c / 20201 high.

Perhaps RBNZ could win the race to the top

RBNZ’s Assistant Governor recently said that a higher NZD would be desirable to help tackle tradable inflation. With a cash rate at 0.75%, the RBNZ already has the highest yield differential among FX majors. But its expected future path also plays an important role in shaping currency trends. Therefore, should we continue to hear more hawkish comments from the RBNZ, it would allow the central bank to retain its positive carry advantage and likely makes NZD a top performer.

The bank recently forecast its base rate to be just above 2% by December 2022 which leaves the potential for five 25 bps hikes next year. But, if RBNZ policymakers want a higher rate and economic data warrants it, they could even raise rates higher than current forecasts which would be very bullish indeed for NZD. 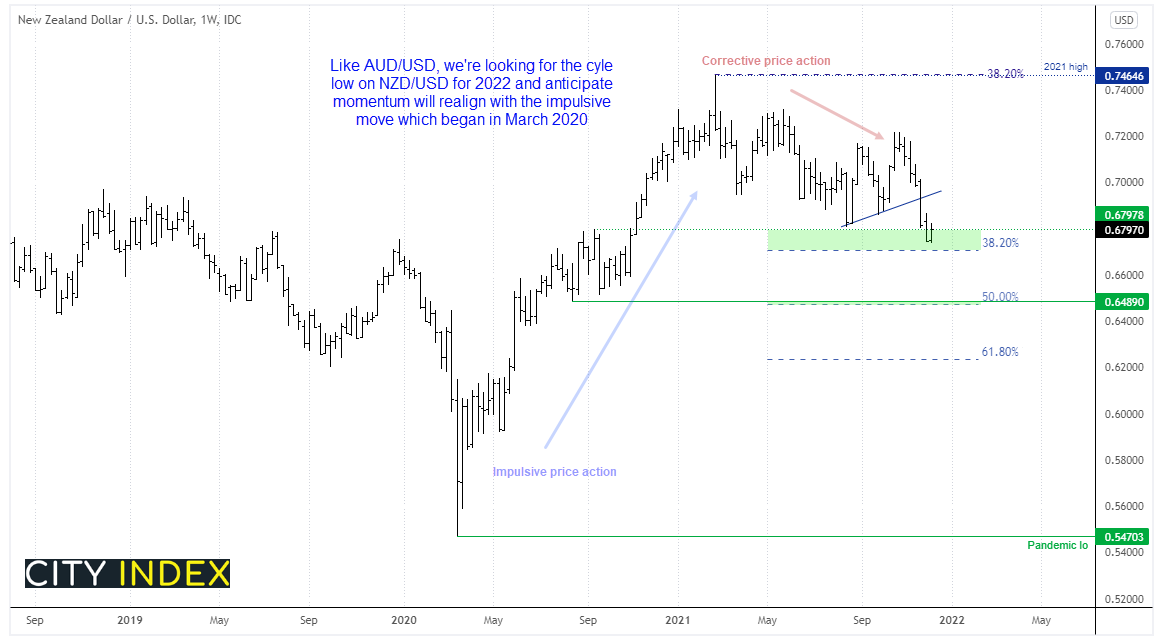 Both AUD and NZD formed V-bottoms in 2020 to major lows and have been retracing against their impulsive moves throughout 2021. Yet NZD/USD has not displayed a bullish divergence, and neither did it’s Rapid RSI fall as much into oversold territory like we saw on AUD/USD (when its own RSI fell to match the March 2020 low). My take on this is that, overall, NZD is the stronger currency as momentum did not fall so much, yet over the near-term the lack of divergence means it may have further to correct. NZD is yet to test its 38.2% retracement level around 0.6700. But if it does mark the corrective low, then a 38.2% projection from it provides an initial target back at the 2021, much like AUD.

As mentioned above, we can use fundamentals to drill down and decide which we expect to be the better performer over a chosen timeframe over weeks or months. And heading into 2022 we clearly pick NZD as the likely outperformer between the two.

Canadian dollar may have the edge over its commodity FX peers

As we head into 2022, the BOC is perceived as the most hawkish of the major central banks…and with good reason. Canada’s employment situation is back to pre-pandemic levels, and oil demand is likely to pick up as covid (fingers crossed) becomes a thing of the past. Markets are pricing in potentially four hikes next year, which could take the BOC’s current cash rate from 0.25% to 1.25%, assuming 25 bps increments.

A guide to CAD

Clearly, oil prices are a major consideration when analysing USD/CAD, especially over the near term. And should the covid-recovery continue, then demand for oil should also pick up to support prices and the Canadian dollar. Therefore, we are relatively bearish on USD/CAD in 2022 but, like AUD and NZD, we see the US dollar outperforming in Q1. 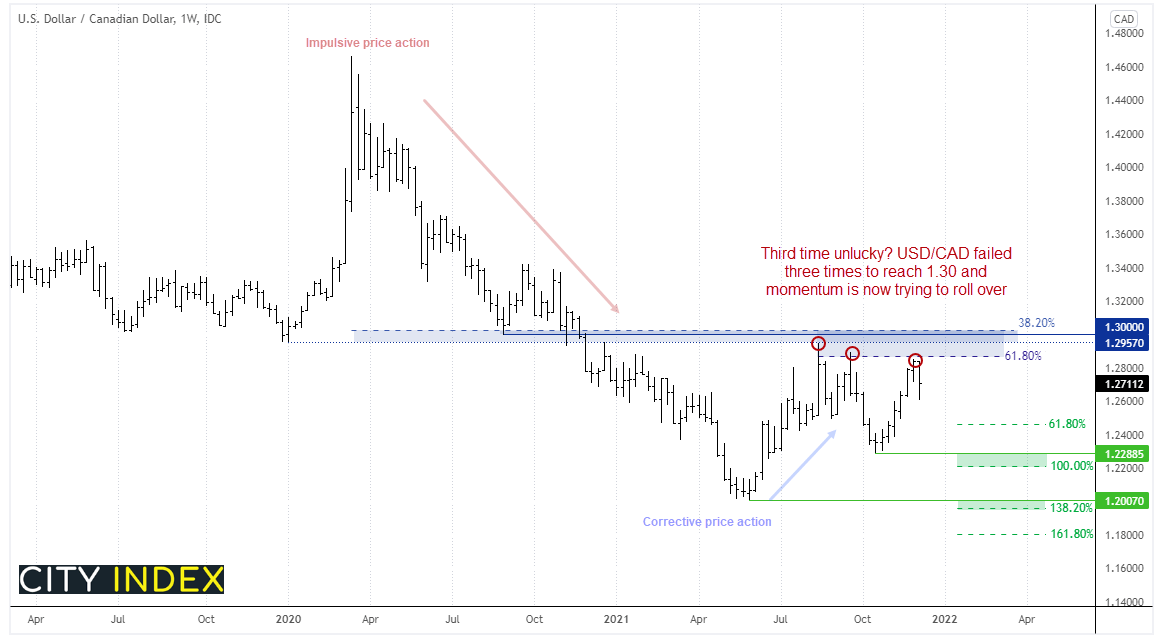 We can see on the weekly chart that its established downtrend began in March 2020, before prices retraced this year and stopped just shy of 1.30. What’s caught our eye is how it has on three occasions failed to retest 1.30 and produced two lower highs beneath the 2021 high.

Unlike AUD, CAD and NZD both enjoy a positive yield differential over the US and both central banks are expected to hike at a faster pace then the Fed. It is therefore plausible we saw the corrective high on USD/CAD back in August. This also means that a break above the resistance zone around 1.30 invalidates this bias.

But as the year progresses, if cyclical currencies dominate as we suspect then USD/CAD could be gunning for the lows around 1.23 and 1.20.

Nvidia earnings preview: Where next for NVDA stock?
By:
Matt Weller CFA, CMT