The European Union CPI for January was confirmed at 5.1% vs a December reading of 5%.  This was a record high since the Euro Area was created.  Remember that the ECB targets 2% inflation.  However, Christine Lagarde is not one to shy away from discussing that the inflation is temporary.  She has recently said that she is confident that inflation will fall back over the course of the year, as oil cannot continue at current prices.  She also noted that she was worried about choking off the recovery.  Note that the ECB meets again on March 10th.  Will Lagarde still discount inflation?

However, inflation is playing second fiddle when it comes to news these days.  The invasion of Russia into Ukraine is dominating the headlines.  The latest information, that the EU will hold an emergency summit on Thursday to discuss the situation, has helped to drive EUR/USD lower.  In addition, it has been reported that the US believes Russia is intending a full invasion of Ukraine within 48 hours and that they may use missiles in an attack on Kiev.

As the headlines came across the wires, the US Dollar began to move higher in a “flight to safety” trade as risk sold off. EUR/USD moved lower as the DXY went bid.  EUR/USD was trading in a long-term downward sloping channel, however broke above it after the ECB meeting on February 3rd.   The pair has been drifting lower since and is currently hugging the top, downward sloping trendline of the channel near 1.1290.  EUR/USD has also been oscillating around the 50 Day Moving Average at 1.1332.  In addition, notice the long upper wicks on the daily candlesticks.  These indicate that buyers were in early in the day, but sellers came in later in the session to push price lower to close the day. 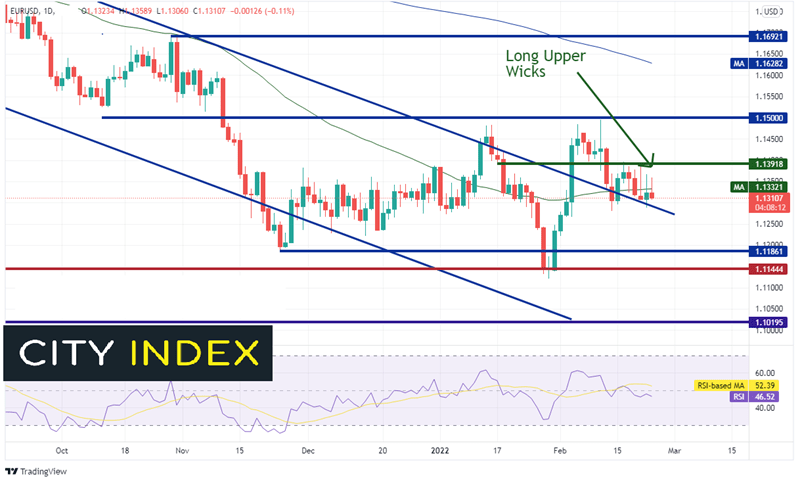 The long wicks also suggest that price could move lower.  First support is the top of the channel trendline near 1.1290.  Just below there is a confluence of support at the 61.8% Fibonacci retracement from the January 28th lows to the February 10th highs and horizontal support, between 1.1265 and 1.1274.  Next support is the November 24th, 2021 lows at 1.1186.  However, if the political landscape changes, EUR/USD could go bid.  First resistance is at the local highs of 1.1392. Above there is strong horizontal resistance and the psychological round number resistance at 1.1500.  If price breaks above 1.1500, price can move up to the 200 Day Moving Average at 1.1628. 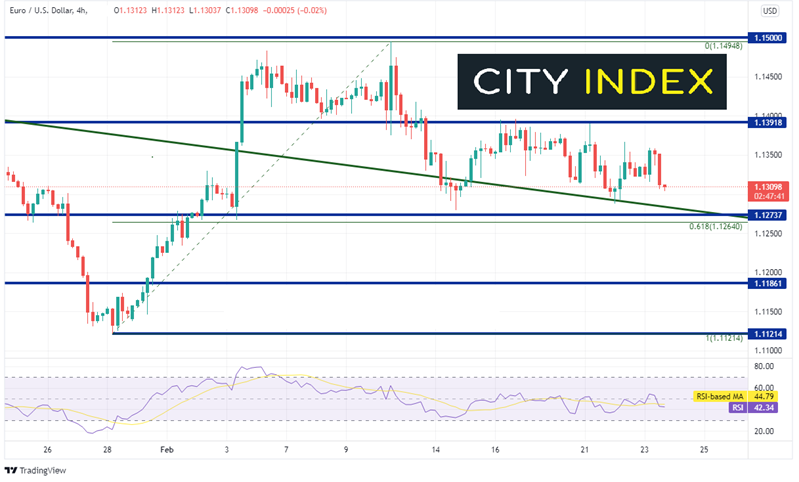 The EU CPI for January was confirmed at 5.1%.  However, with the ECB meeting still 3 weeks out, the focus for EUR/USD is going to be the Russia/Ukraine headlines.  Negative headlines should benefit the US Dollar, which would push the EUR/USD lower.