This month’s US jobs report comes at a bit of an awkward time.

Due to the US holiday on Monday, several of the “leading” indicators for the release will be delayed, or in the case of the ISM Services PMI report, will not be released until after the monthly Non-Farm Payrolls (NFP) report itself. Meanwhile, the UK will be in the midst of a 4-day holiday weekend celebrating Queen Elizabeth’s Platinum Jubilee, meaning liquidity will be lower than usual with one of the planet’s major financial centers offline.

The macroeconomic backdrop is also relatively unique: Historically, the net new number of jobs has been the highlight, but especially in recent months, markets have been far more interested in inflation data, including changes in the NFP report’s average hourly earnings measure. Indeed, inflation is a particularly fraught topic at the moment, with Fed Chairman Jerome Powell meeting with President Biden in the White House later today, presumably to discuss what the central bank is doing combat price pressures.

That said, the Fed has seemingly penciled in (if not outright penned in!) two more 50bps interest rate hikes in June and July, so unless we see a massive surprise on the inflation front, this month’s (or indeed next month’s) NFP report is unlikely to influence Fed policy over the next couple of months. In other words, between the lower-liquidity holiday trade and lack of immediate policy implications, the market reaction to this month’s jobs report may be more limited than usual assuming it comes in anywhere near consensus expectations.

What are traders expecting from the NFP report?

As of writing, the consensus expectations for this month’s NFP report are as follows:

In other words, traders are expecting the same general trend we’ve seen over the last few months: An historically tight labor market, with wages rising at a strong (albeit not meaningfully above inflation) pace as businesses compete to attract employees.

Interestingly, there is some early evidence of a possible slowdown in employment growth in high-frequency data. For example, the total number of job postings on Indeed.com have flatlined since the start of the year, while the year-over-year growth rate in US job postings peaked around the same time, though they’re still up an impressive 55% from pre-COVID levels: 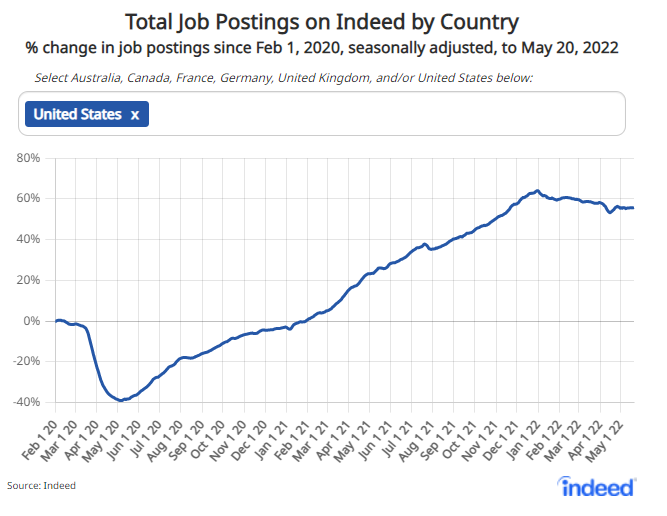 Looking at more traditional economic data, the 4-week moving average of initial unemployment claims hit a record low in early April around 170K new weekly claims and has since turned higher and seen its most prolonged rise since the start of the pandemic, up to about 200K as we go to press:

In other words, employers may not be posting as many new job openings as they were late last year, and at the margin, more Americans are claiming unemployment benefits than were at the start of this quarter. Of course, both of these measures are still at historically strong levels, but the rate of change may be shifting to show a slight cooling in the labor market.

Stay tuned for our full NFP preview on Thursday with our model’s projections and specific markets to watch ahead of Friday’s report!