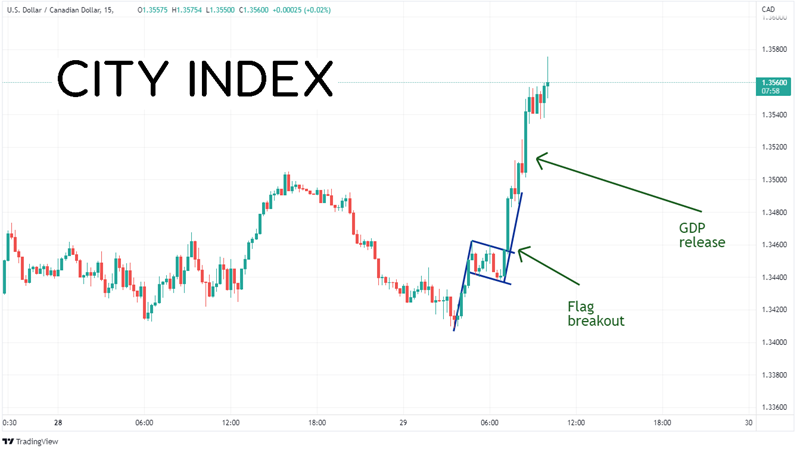 Everything you wanted to know about the Bank of Canada

The short-term, 15-minute chart of USD/CAD acted a bit unusual today, both before and after the data.  One and a half hours before the GDP data was released, USD/CAD broke above the top of a flag formation around 1.3457 and took off.  It reached its flag target almost immediately near 1.3500.  However, once the data was released, which should have been bullish for the Canadian Dollar, the pair resumed its move higher, reaching an intraday high of 1.3575. 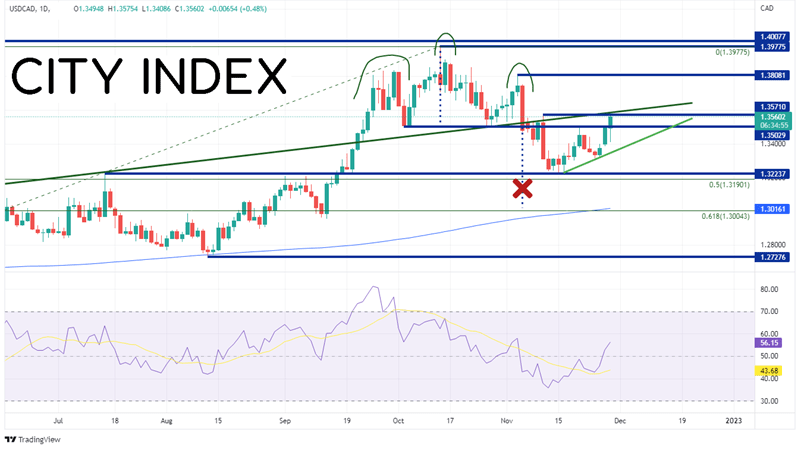 On a daily timeframe, USD/CAD had formed a Head and Shoulders pattern with a neckline near 1.3503.  Price broke below the neckline on November 4th.  Yet, it wasn’t until November 10th that USD/CAD moved aggressively lower towards the head and shoulders target of 1.3040. However, price held horizontal support at 1.3224 and began moving higher. With today’s move in price, up over 150 pips off the low, the head and shoulders pattern was negated as price traded back above the neckline.  The pair in now up against a confluence of resistance at the highs of November 10th and a long-term rising trendline dating to March 7th at 1.3571. 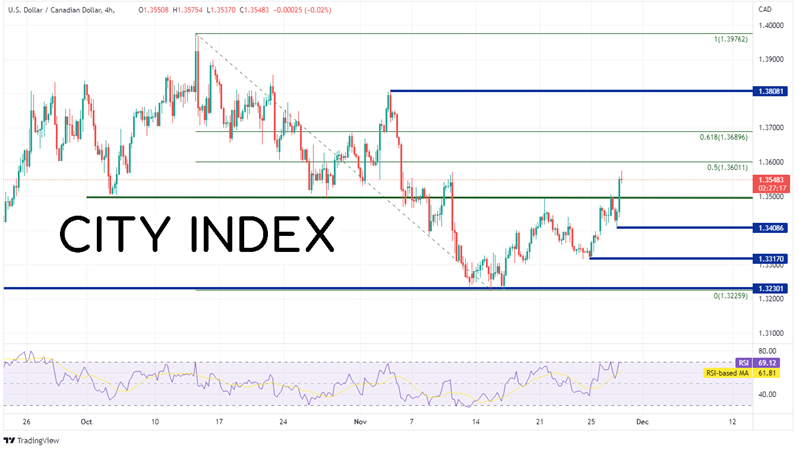 
If price continues to move higher, the next level of resistance is at the 50% retracement level from the highs of November 10th to the lows of November 15th at 1.3601 and then the 61.8% Fibonacci retracement level from the same timeframe near 1.3690.  Above there is horizontal resistance from the highs of November 3rd at 1.3808.  However, if the resistance holds, the first support level is back at the neckline of the head and shoulders pattern near 1.3503/1.3505.  Below there, price can fall to Tuesday’s low at 1.3408, then the low from November 25th at 1.3317.

USD/CAD made a large move higher today, though it doesn’t seem like it was based on fundamentals.  But there are several other upcoming events that traders could be looking ahead to.  They include month-end, the OPEC+ meeting on Sunday (which could affect the direction of the Canadian Dollar), or even the Bank of Canada meeting next Wednesday.  Whatever the reasoning, watch the support and resistance levels for areas where price may halt or even reverse.