The global energy crisis - when will it abate and what does it mean for oil?

The global energy crisis – when will it abate, and what does it mean for oil?

At the turn of the year, as the world attempted to bounce back from the pandemic, a combination of surging demand and a supply crunch threw the oil and gas markets into turmoil. Then, on February 24, Russia invaded Ukraine, which roiled the energy markets, further sending prices across the energy complex to multi-decade or, in some instances, to record highs.

What caused the 2021 global energy crisis?

The origins of the energy crisis in 2021 could be traced back to low natural gas inventories, falling European gas supply, declining energy production from wind sources owing to calmer weather, suspicions of Russia holding back gas supply, geopolitical tensions surrounding Nord Stream 2, and surging gas demand as economies reopened. These factors came together, creating the perfect storm for an energy crisis.

The energy crisis at the end of last year feels like a distant memory as Europe now finds itself at the epicenter of the energy crisis once again, but for very different reasons. More recently, Russia’s invasion of Ukraine has been and continues to be a key driver of energy prices for several reasons. Russia’s unprovoked attack on Ukraine and the subsequent sanctions from the West have had implications for energy security across the globe but more acutely in Europe, as Europe is heavily dependent on Russian oil and gas. Germany, Europe’s largest economy, relies on Russian gas for 90% of its gas needs and Russian oil for 45% of its need. Russia provides around one-third of Europe’s total gas supply.

Supply fears have sent energy prices surging. Fears of Russia slowing or cutting supply, as it did to Poland and Bulgaria after they refused to pay in rubles, have boosted prices. Additionally, as more countries place an embargo on Russian oil, such as the G7, which was agreed last weekend, oil and gas prices remain elevated.

Natural gas surged to a record high after the EU proposed to phase in an embargo on Russian oil, although the deal is yet to be approved as Hungary continues to dig in its heels. A ban on Russian natural gas will be difficult to achieve.

In the latest oil and gas news, gas flow to Europe has fallen after disruptions in Ukraine, with Kyiv halting the use of a major transit route. This was the first time that exports via Ukraine have been disrupted since the start of the war.

What does this mean for oil supply?

Oil prices rallied 50% across 2021 and have surged a further 35% in the first four months of 2022. The price surged to a high of $139 pb, before easing lower to around $110 bp, helped in part by a huge and sustained release of strategic reserves from the US and its allies, amounting to around 180 million barrels over a six month period.

Supply concerns and the refusal of OPEC+ to be drawn into the issue, insisting that it’s a geopolitical problem rather than a supply problem, have kept the price elevated. OPEC+ continues to raise output at the previously agreed 432k bpd, but compliance with this is weak and doesn’t consider the reduced supply due to the Russian war.

The demand outlook for oil is closely tied to economic growth forecasts. According to the IMF, the global economic outlook is deteriorating. The IMF slashed its global growth forecast to 3.6% amid the fallout from the Ukraine war and COVID lockdowns in China, this was down 0.8% from its January forecast and 1.3% lower from the forecast six months ago.

With global growth set to slow, the EIA lowered its global petroleum fuel consumption outlook for 2022 to 99.8 million barrels per day, down from 100.6 million previous forecasts. The agency also raised its outlook for natural gas prices. Higher oil prices have prompted some US producers to ramp up production. The US is expected to account for 60% of non-OPEC supply gains next year. However, US production is not likely to hit pre-pandemic levels until the end of 2022.

What could calm supply fears and ease the energy crisis?

The most obvious factor would be a ceasefire in Ukraine and the end of sanctions on Russian oil. However, this could still be a long way off. Even if Russia and Ukraine end the war, the West will likely keep sanctions in place for some time.

Aside from a ceasefire, it would take a consistent supply to the market from another provider, aside from the strategic reserves, which haven’t surfaced so far. Hopes on Iranian sanctions being eased have evaporated, and OPEC is wiping its hands clean of any involvement.

The other side of the equation is a deteriorating demand outlook. Slowing global growth concerns as central banks tighten monetary policy and any signs of a recession could send oil prices lower.

Tighter or more extensive lockdowns in China as COVID spreads could pull oil prices lower. Although beware, should the COVID picture in China improve, oil prices could quickly rise again.

Where next for WTI oil?

Oil prices have been trending higher since the end of the last year, surging to a high of 128.20. Since then, the price has eased but still trades above its rising trendline and above its 100 sma. The RSI is neutral as the price consolidates. 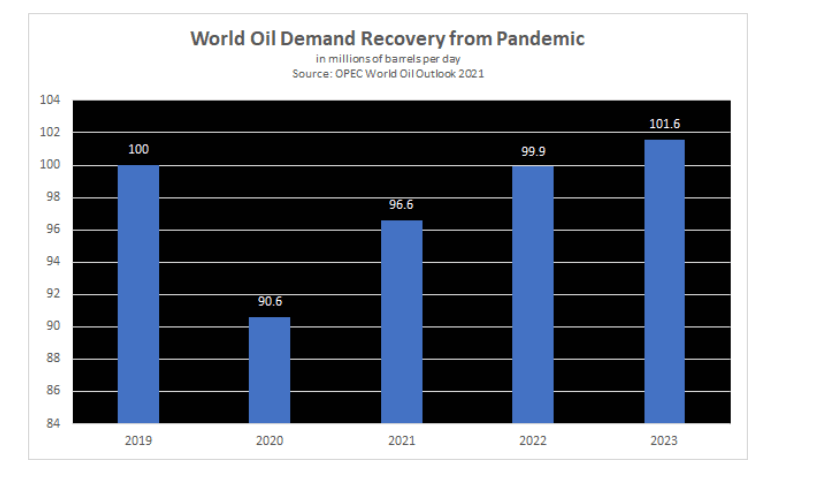 Where next for Brent?

Brent has been trending higher since last year, surging to a high of 139.00. The price has since eased lower, forming a symmetrical triangle.

The RSI is currently neutral. Traders could look for a break-out trade, with buyers eyeing a move over the falling trendline resistance at 112.00 and test 113.80 May 5th high, ahead of 121.40, the March 24 high.

Other markets to consider should gas prices rise again

In addition to trading oil, there are other ways to tap into the energy crisis trade. The surge in gas prices has led to smaller energy companies collapsing, leaving larger energy firms such as SSE and Centrica to mop up the extra customers.

Oil majors have also had a stellar first quarter, with earnings smashing forecasts on the back of surging oil and gas prices.