This is another Goldilocks report; a stellar headline number, with wages not quite hitting the mark. This is a report which shows that the US economy is not overheating but that the bond market was premature in pricing in an interest rate cut later in the year.  This NFP report shows that the Jerome Powell’ stance is spot on – US economic growth is strong but inflationary pressures are just a little softer, it supports the Fed’s current stance of keeping its finger on the pause button. The Fed’s unwillingness to cut interest rates has been justified. Yet at the same time the increase in wages is encouraging.


The markets reaction was, like last month, rather unremarkable. The dollar reached session highs but has since eased back, whilst the S&P hovered around record highs. The market’s muted reaction is because the NFP shows that the US economy remains on a steady trajectory and that is being efficiently priced int the market.


GBP/USD retakes $1.30
GBP/USD  is recovering post NFP after hitting a nadir of $1.2990. Theresa May and the Conservatives had a very difficult night in the local elections as the public vented their frustrations over Brexit on the ballot papers. As a result, the Conservatives (and Labour) lost hundreds of seats at local level. Theresa May’s position looks as shaky as it ever, which had sent the pound lower earlier in the session. The dollar easing off session highs is helping to lift the pound back over $1.30.  Pound traders are looking towards cross party Brexit talks for clues. 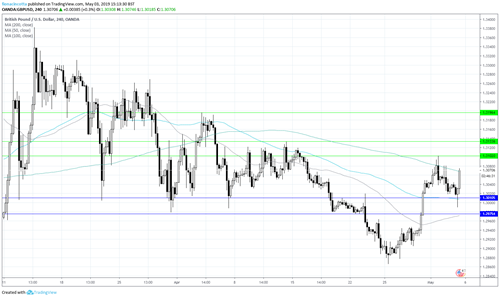