Janet Yellen gave a fairly upbeat testimony to the Senate Banking Committee today, saying that waiting too long to remove accommodation would be “unwise”, and said that the FOMC will continue to hike rates as long as the economy “continues to show signs of strengthening”. There had been some expectation in the market that Yellen could err on the side of caution by sounding concerned about the recent weakness in US wage data, but this didn’t appear to register as a concern for the Fed chair at this stage.

The dollar index continues to rise to fresh highs of the day and the 10-year Treasury yield has tested 2.5%, the highest level since the start of this year.

Other highlights from the Yellen testimony include:

1, she warned of uncertainty under Trump, saying that “economic and fiscal policy face an uncertain path under the administration of Donald Trump”. This is the second time that a high ranking Fed official has warned about the current administration’s economic plans, after Stanley Fischer voiced something similar last week. We think that the dollar may also benefit from these comments, as it suggests that the Fed is not frightened of criticising the Trump administration, and thus asserting its independence; in the current environment this is dollar positive, in our view.

2, The Fed will eventually shrink its balance sheet, but that it will only do so gradually, and the balance sheet will not replace interest rates as a monetary policy tool.

3, In another sock to Trump she also defended banking regulation, something that Team Trump is trying to scale back.

4, Yellen plans to complete her complete term at the Fed, her term as chair ends next year, while her membership of the Fed’s board expires in 2024.

5, Diversity is an important goal in regional Fed searches. Trump and co. are likely to announce their picks for the open spots on the FOMC at some stage in the coming months, so this could be signal from Yellen to Trump to not populate the Fed with people who think like him – i.e., members who may want to keep rates low and weaken the dollar.

Overall, expectations of a Fed rate hike next month have risen since Yellen’s testimony, expectations of a 25 bp rate hike at the March FOMC meeting have jumped to 34% from 24% last week, although the majority of the market still expect rates to remain on hold until June, when there is a 45% chance of a rate hike.

Yellen’s tone to the newly elected Congress was definitely “ballsy”, it suggest that she will maintain the Fed’s independence, and will stand her ground when it comes to any risks that the Trump administration may (or may not) pose to financial and economic stability in the US. She was a touch more hawkish than expected, which, when combined with comments from non-voter Lacker who said that the case is building for a rate hike in March, boosted the dollar, weighed on equities and on bonds. There are now three things to watch out for:

1, A daily close above 2.5% in the US 10-year Treasury yield. The spread between UK and US Treasury yields fell three basis points on the back of Yellen’s comments, and the spread is back at its lowest level since the end of December, see chart below. Back then GBPUSD was trading around 1.2250, so the yield spread could indicate further GBP weakness this week.

2, Any comments from Trump – will he tweet his displeasure in her lack of confidence in his mystical fiscal plans?

3, Watch out for who Trump picks to fill the vacant spots on the Fed. Yellen called for diversity, but if Trump fills those spots with people akin to his own world view – low rates and lower dollar – then the path of Fed policy could change sharply going forward. 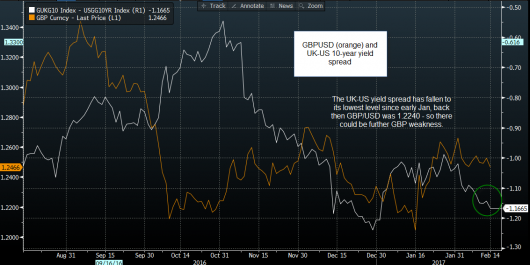 What you should know about the GlaxoSmithKline demerger
By:
Rebecca Cattlin

What are value stocks and how do you find them?
By:
Rebecca Cattlin