US NFP in-line. What does it mean for the Fed?

September US Non-Farm Payrolls showed that the economy added 263,000 jobs to the economy, roughly in line with expectations.  Although the print was less than August’s 315,000, it still shows that the jobs market is humming along nicely. The Unemployment Rate dropped back to 3.5% vs an expectation of 3.7%.  This print returned to the same level as in July, which was the lowest in over 2 years.  In addition, the Participation Rate fell to 62.3% vs 62.4% prior.  Average Hourly Earnings was in-line with expectations at 0.3%.

The Fed should be happy with the jobs data. Although lower than August’s print, September’s NFP print still shows that the jobs market is strong. The Fed has been saying in unison lately that lowering inflation is its number one concern.  The way to lower inflation is by hiking interest rates.  The Fed has long said that it is willing to lower inflation at the expense of jobs.  So far, the Fed’s rate hikes from 0% to 3.25% have not had a hit to the Unemployment Rate.  Note also that the Average Hourly Earnings was +0.3%.  This shows that earnings are continuing to move higher as inflation moves higher.  Therefore, September’s jobs data should continue to give the FOMC confidence to raise rates by 75bps when it meets again on November 2nd.  If the CPI data next week is stronger than expected (economist’s consensus is for 8.1% YoY), then markets may see calls for rate hikes as high at 100bps! 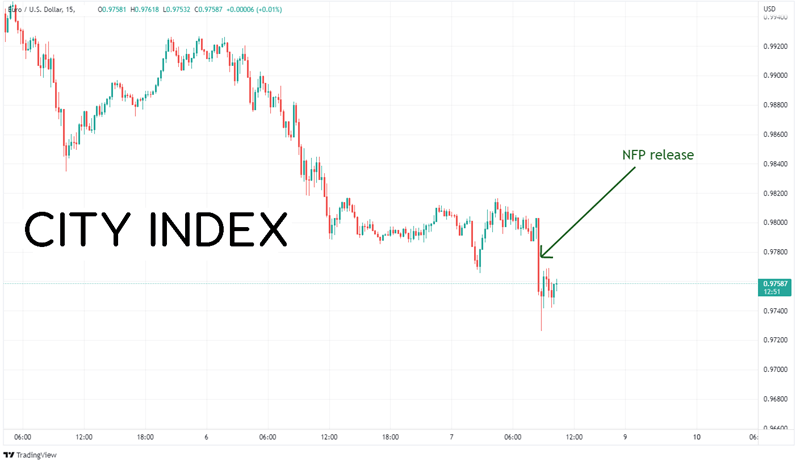 EUR/USD has already been moving aggressively lower since the pair reached a year-to-date high of 1.1495 on February 10th.  The pair has been moving lower in an orderly downward channel since then as the Fed raised rates faster than the ECB. During late August and early September, EUR/USD oscillated around parity.  On September 21st, EUR/USD dropped 132 pips and parity has yet to be seen since.  A 20-year low was established on September 28th near 0.9536 as the RSI became oversold.  The pair bounced back towards parity over the next few days, only to once again move lower into the NFP release today. 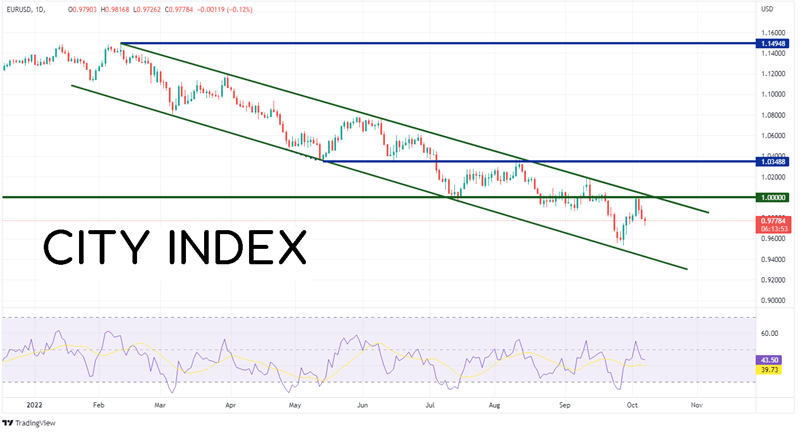 If EUR/USD does continue to move lower, the first support is at the 61.8% Fibonacci retracement level from the lows of September 28th to the highs of October 4th , near 0.9715.  Below there, the pair can trade to the September 29th lows of 0.9635, then the lows of September 28th at 0.9536.  However, if the pair bounces, first resistance is at 0.9834.  Above there is a confluence of resistance at the top, downward sloping trendline of long-term channel, recent highs, and psychological resistance near 1.0000.  If the pair breaks above 1.0000, the next resistance level is 1.0192. 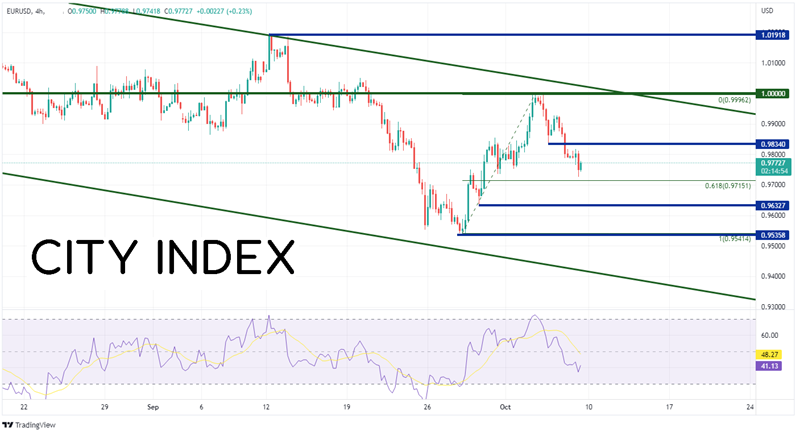 Will the Fed continue to hike rates?  Based on today’s NFP report, the US jobs market is still strong and should lead to more rate hikes by the Fed.  However, if the inflation data next week is much weaker than expected, the Fed may look to change its tune.