US Dollar Fake out?

The US Dollar Index (DXY) reached it highest level in 20 years on September 28th at 114.78.  Since then, the index has been moving lower.  Most recently, the DXY has been moving lower in an orderly downward sloping channel from November 21st, 2022, when price made a near-term high at 107.99.  Price then struggled to break below the 50% retracement level from the lows of January 2022 to the highs of September 2022 near 104.72.  However, as the new year arrived, the direction of the DXY looked like it may be changing.  On January 3rd, the DXY broke out above the top trendline of the channel and continued higher until January 5th.  However, Average Hourly Earnings and US Non-Manufacturing PMI was released on Friday and suggested that the Fed may turn less hawkish.  As a result, price fell back towards the top trendline of the previous channel.  On Monday, not only did the DXY break back into the channel, but it also broke below a long-term trendline dating to May 2021.  Was this a false breakout above the top of the channel?  If so, often when price fails to break out of one side of a pattern it moves to test the opposite side.  Therefore, the target on the downside for the DXY is near 101.30, which is also the lows from May 30th, 2022.  If price is to get there, it must first pass-through support at the 61.8% Fibonacci retracement from the above-mentioned time frame.  If price bounces, resistance is at the top trendline of the channel and today’s high at 103.94. Above there, the DXY can move to yesterday’s high of 105.63, then the 200 Day Moving Average at 106.33. 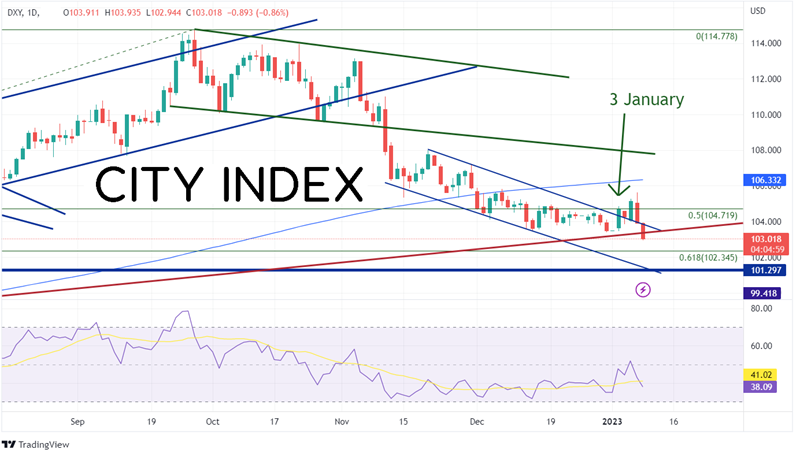 If fx traders are looking to trade an fx pair, rather than the US Dollar Index, USD/CHF is the place to look.  The pair has a strong positive correlation with the DXY, as shown in the panel at the bottom of the chart below.  The current correlation coefficient between the 2 assets is +0.88.  Correlations with a reading above +0.80 are considered to be strong, positive correlations.  Therefore, if the DXY moves in one direction, USD/CHF tends to move in the same direction. 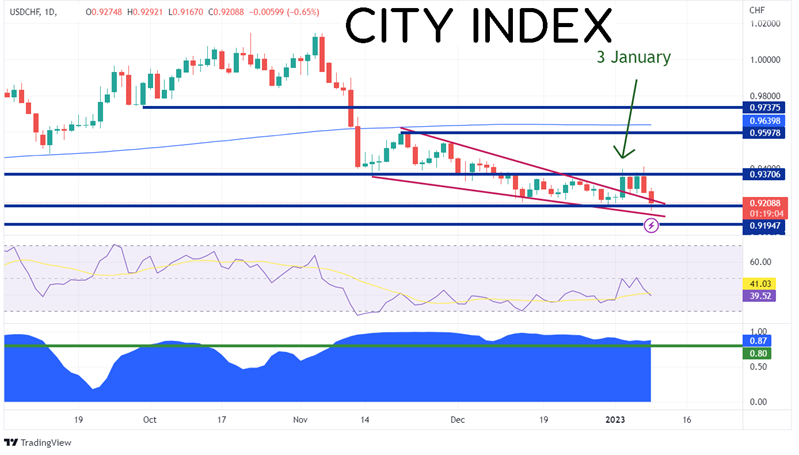 On November 21st, 2022, as the DXY was making a near-term high, so was USD/CHF near 0.9598.  However, as the DXY was trading in a downward sloping channel, USD/CHF was trading in a descending wedge formation.  On January 3rd, price moved above the top trendline of the wedge, just as the DXY moved above the channel.  Today, USD/CHF moved back into the wedge, just as the DXY moved back into the channel.  If this move does prove to be a false breakout above the wedge, price could move to the other side of the wedge, which is near 0.9140.  The 2022 low is just below there at 0.9192.  Resistance is at today’s high of 0.9167, then yesterday’s high of 0.9409.  If USD/CHF moves above there, the next resistance level isn’t until November 21st highs at 0.9598.

The DXY may be posting a false breakout above the top trendline of the near-term channel.  If so, the target is the bottom side of the channel.  USD/CHF has a strong correlation with the DXY.  Therefore, if one wishes to trade a currency pair rather then the US Dollar Index, USD/CHF could be a good choice!