On Monday afternoon, the FTSE was trading in the positive territory following a strong performance on Wall Street on Friday. With this being another week full of central bank meetings, economic data and earnings, things could look a lot different by the end of the week. We are not very positive towards stocks in general right now, and the FTSE could struggle to make further headway from here.

The FTSE has recovered from its mid-October lows, in line with the western financial markets. However, its gains of around 5-6% have been far less impressive than the 10%-plus that most of the mainland European indices and major US indices have enjoyed over the same period. Of course, it could have been worse for the UK benchmark stock index, with markets in China and Hong Kong repeatedly hitting new lows for the year. So, it looks like the FTSE has been pulled in both directions, with concerns over China weighing on miners and Chinese-linked stocks, while some of the other sectors have been pulled higher thanks to the relief rally elsewhere.

Going forward, the FTSE’s direction will depend very much on whether growth concerns over China will outweigh a bit of optimism we’ve seen over the past couple of weeks, and whether the Fed will decide to pivot to a more dovish stance in as far as interest rates are concerned.

Much of the attention this week will be on the US Federal Reserve’s policy decision on Wednesday. While a fourth 75-basis point rate hike is almost certain, it is not fully priced in. The probability for a 75bps hike has eased to around 87% according to the CME Group’s FedWatch tool, falling from around 95% the week before. If the Fed hikes by 75bps then this will disappoint those who were looking for a smaller increase, and thus may cause a bit of a downward move in stock prices across the globe. But more to the point, while a 75 basis points hike is likely at this meeting, the market is quite unsure about what type of a signal the Fed will provide in terms of future rate hikes. For the December 14 meeting, for example, the market is spilt between 50 and 75 basis points. So, it is all about what whether the Fed will manage expectations lower for that meeting, or whether it will signal that another aggressive hike will be on the way.

Inflation remains very high in the US and around the world, but there is a danger of tightening policy too much that it tips the economy into a sharp recession.

The market has started to price in a pivot to a more dovish stance from the Fed, which explains why the markets have found some relief in the last couple of weeks. If the Fed decides to pivot to a more dovish stance, this should provide at least a short-term boost to stocks and reduce the appeal of the US dollar against currencies where the central bank is having a hard time controlling inflation. So, the pound could find further relief, with the CPI accelerating to double digits in the UK. But undoubtedly, a lot of other of other currencies that have suffered during this strong dollar bull run will also find some relief.

However, I very much doubt the Fed will want to ease off the gas just yet, with employment remaining quite strong. In the event the central bank appears more hawkish than the markets hope, this could put renewed upward pressure on the dollar, especially against the likes of the yen and yuan, while cause more pains for the global stock markets, including the FTSE.

Domestically, the appointment of Rishi Sunak as the new UK PM after a disastrous 45 days during Liz Truss’s premiership has helped to calm investors nerves a little here, with both the pound and UK bond prices stabilising somewhat. While uncertainty remains, the focus for the FTSE traders is slowly shifting away from politics and towards more macro themes affecting the wider stock markets.

The Bank of England faces another tough decision this week as it prepares to push interest rates even higher, in order to help bring inflation under some control after CPI raced to above 10% in September on an annual basis. Analysts are expecting the BoE to hike by 75 basis points at this meeting, but it is clear that the policymakers at the Bank are not comfortable about the level of tightening the market has priced, with rates seen peaking just below 5% in 2023. A 75-bps hike on Thursday would lift rates from 2.25% to 3.00%, which would be the highest since those dark days of the global financial crisis.

A dovish surprise of a 50-bps hike could lend some support to the FTSE, although if this is accompanied with a stronger hawkish message in terms of future hikes, it would have a similar impact on the markets.

With the FTSE containing lots of miners and energy stocks that could be negatively impacted by economic China’s situation, I believe this poses a bigger threat to the FTSE than the BoE’s meeting this week. Data overnight from China showed further weakness for the world’s second largest economy as manufacturing and services PMIs both came in below 50.0, underscoring concerns about the state of the economy. The Manufacturing PMI fell to 49.2 vs. 50.1 last, while the non-manufacturing PMI slipped to 48.7 vs. 50.6 previously. A reading below 50.0 means contraction, so these numbers are very poor.

As a result of further weakness in Chinese data, the local stock markets tumbled again at the start of this week, and the likes of the FTSE China 50 and Hang Seng slumped to a new lows for the year while commodities like copper and crude oil fell on demand concerns.

Eurozone data has been a tad better as German retail sales and eurozone GDP both beat expectations, although CPI inflation accelerated to 10.7%, which was more than expected, from 9.7% previously.

While the FTSE has risen quite a bit off the mid-October lows, it is all inside the larger swings of lower lows and lower highs. We remain cautious until the charts tell us otherwise. The area around 7100 to 7140 has been pivotal in the last few weeks, so do watch price action closely there. Given the recent recovery, we could see an initial breakout, but if the bulls fail to push the index onwards and upwards because of the macro reasons discussed above, that potential breakout could turn into a failed breakout reversal pattern. 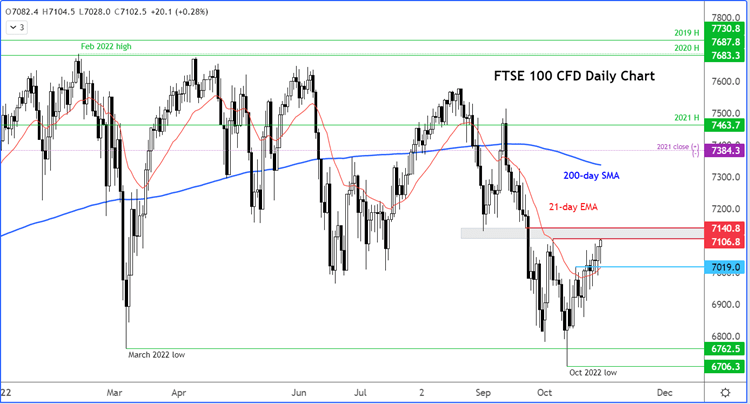