EUR/USD 1 cent away from parity

Although the EUR/USD bounced off its lows on Friday despite a stronger US jobs report, the currency pair remains heavy as we start the new week. It looks like investors are not taking any chances on shorting the US dollar, with the greenback rising across the board. The USD/JPY, for example, finds itself at a fresh multi-decade high after breaking the 137.00 handle overnight. Will the euro follow the yen in breaking to a new low? A test of parity on the EUR/USD exchange rate by Wednesday is certainly possible as market looks ahead to the publication of US CPI.

Inflation has caused havoc across financial markets, and all the attention will turn to the US on Wednesday as the government releases the June CPI estimate. If annual CPI accelerates to more than 8.8% expected, this will likely trigger fresh gains for the dollar, given there’s been some talk of peak inflation. In May, annual CPI had come in at 8.6%, which marked a sharp acceleration from 8.3% the month before.

In Europe, inflation is not the only thing that is hurting sentiment. As my colleague Fiona Cincotta noted earlier, worries over energy security are also hurting risk sentiment in Europe with Nord Stream 1 closing today for ten days for scheduled repairs. There are worries that Russia will refuse to turn the supply back on, “using the gas supply as a political weapon,” Cincotta added. If that happens, then gas rationing could be the outcome while Germany tries to secure supplies from elsewhere.

The EUR/USD is now just 1 cent or 100 pips away from parity: 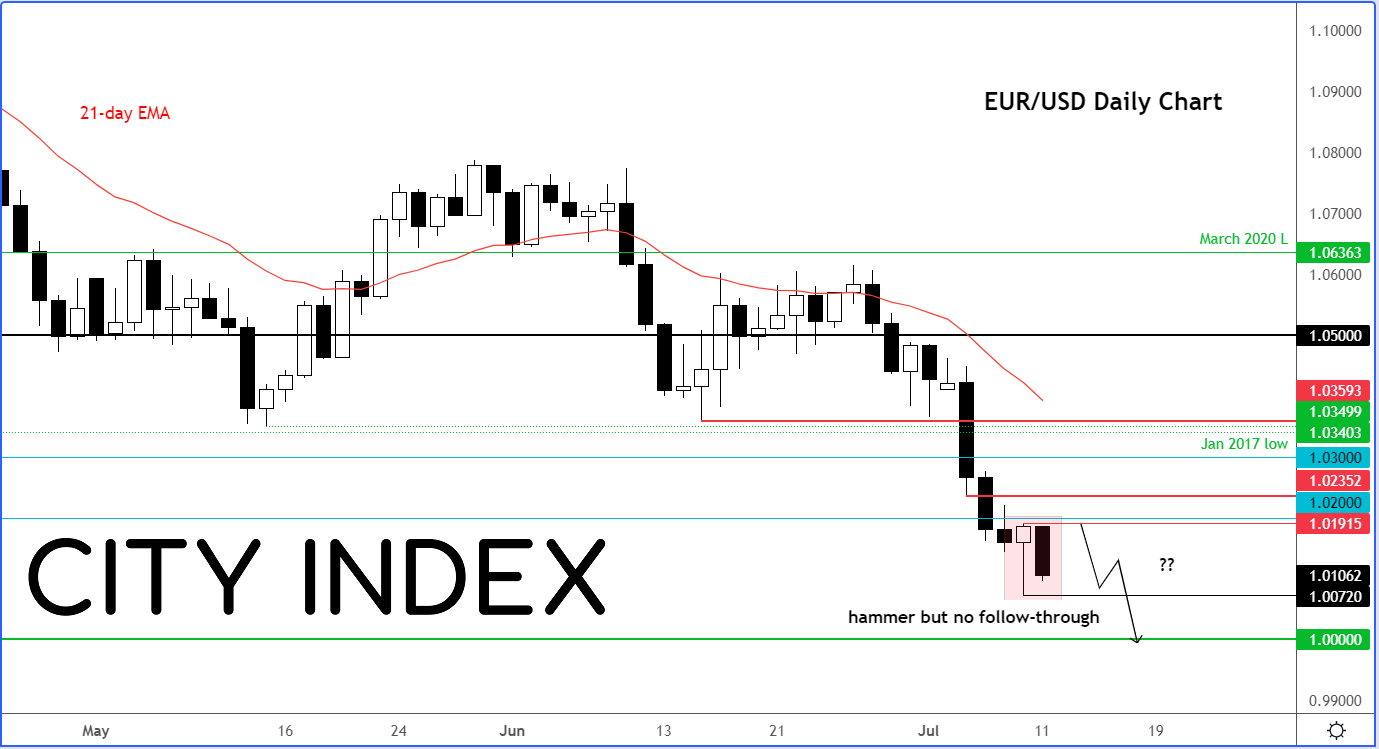 While a drop to 1.0000 looks very likely, it is possible that we may see some short-side profit-taking ahead of the publication of US CPI on Wednesday. There is thus the possibility that the EUR/USD might be able to hold up around current levels and defy market gravity. A weaker US CPI could delay the potential drop to parity until next Thursday’s European Central Bank rate decision, where Christine Lagarde and her ECB colleagues will hike rates for the first time since 2011.

But the fact that there has been no follow-through despite the hammer candle we saw on Friday, this suggests that price remains under heavy pressure. Friday’s low was around 1.0072. A move below this level looks very likely today, given that there will be some stops resting there from early and trapped longs. As this level is very close to parity, a run on those stops could trigger a sharp continuation to and potentially below parity.