Asian equity markets took the bullish baton from Wall Street and continued higher. The Hang Seng was a top performer, rising around 5.6% - with the majority of top benchmarks rising over 1.5%.

High levels of volatility for yen pairs yesterday prompted Japan’s officials to remind markets that they’re watching the exchange rate, and will not hesitate to intervene. USD/JPY rose nearly 3x its usual 10-day ATR yesterday and was the weakest pair of 28 that we track among FX major pairs.

However, volatility was a shadow of its former self (in relation to yesterday’s moves anyway_ for currency and commodity markets, as traders across Asia erred on the side of caution and chose not to jump onto the back of extreme moves. 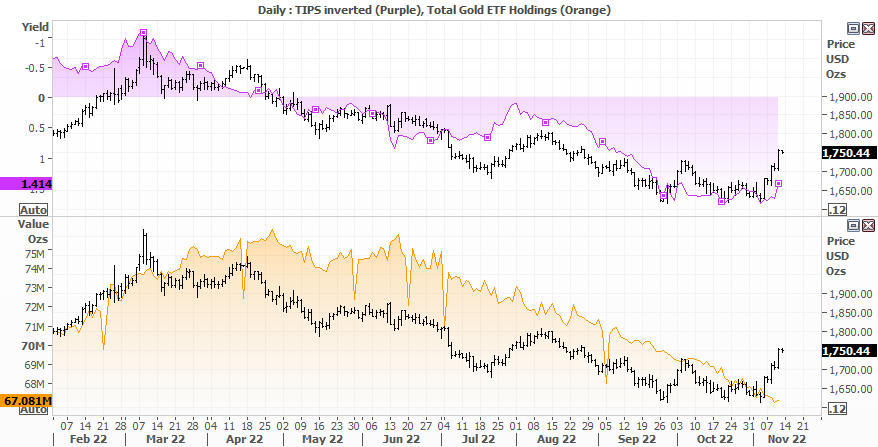 In recent weeks I have noted in some reports that strong support sat around the $1614 lows, as evidenced by the fact buyers would step in each time the market sold down to that level. And even if the level were to break, $1600 was likely to hold – at least initially. Furthermore, options traders had a favourable outlook for the December contract as calls outweighed puts. And this remains the call with the call/put ratio currently at 2.6, which shows options traders have a favourable view over the next few weeks.

But the recent inflation report has sent TIP lower, which moves inversely to gold. If yields and the US dollar continue to fall, it simply continues to support a bullish case for gold. On a side note, ETF traders should note the potential for gold ETF flows to pick up and close the gap with gold prices over the coming sessions.

A strong bullish trend has developed on gold’s 4-hour chart, although perhaps its too strong and needs a pullback. Prices are meandering around $1750, so a retracement towards the $1735 support zone would be welcomed were I’d seek evidence of a swing low, then reassess it potential to rise to the $1765 resistance zone. Should momentum instead continue higher, bulls could switch to lower timeframes and seek continuation patterns. 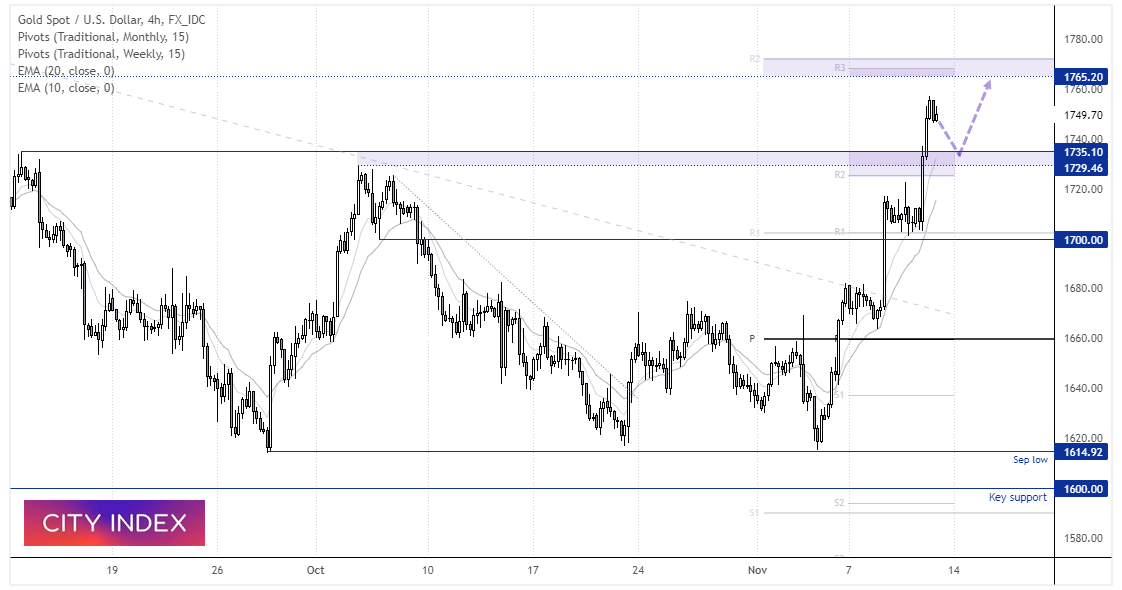 GBP in focus ahead of the UK data dump

A host of UK data including GDP, manufacturing and industrial production is released at 07:00 GMT. One school of though it that it is debatable as to how it ill pan out, with the BOE sending warnings of a 2-year recession. Will the bad data really be a shock? And even if it were to surprise to the upside, it may be treated with suspicion and seen as a mere blip.

Still, price action on GBP/AUD looks like it wants to turn lower and a weak set of data points for the UK could help with that. A double top has formed at cycle highs and prices are now resting on the 200-day EMA, a break beneath which assumes a move bac to the 1.7479 lows and perhaps the 1.4700 handle, just above the weekly and monthly S1 pivots.

Economic events up next (Times in GMT)