At the start of the new week, the FX markets continue to trend strongly in the favour of US dollar after Friday's stronger US jobs report reinforced expectations of more aggressive Fed rate hikes. Meanwhile, the likes of the euro and yuan (and thus AUD) going in the opposite direction on the back of weakness in data.

The USD/CNH has started to climb back towards its recent highs after a period of relative stability since the end of September. More on this later.

Meanwhile, Chinese equities have slumped at the start of the new week, with the benchmark CSI 300 Index falling by 2.2% to close at its lowest since April 2020. Losses were led by tech and consumer staples. The China A50 index (CHN50) plunged even more profoundly overnight: 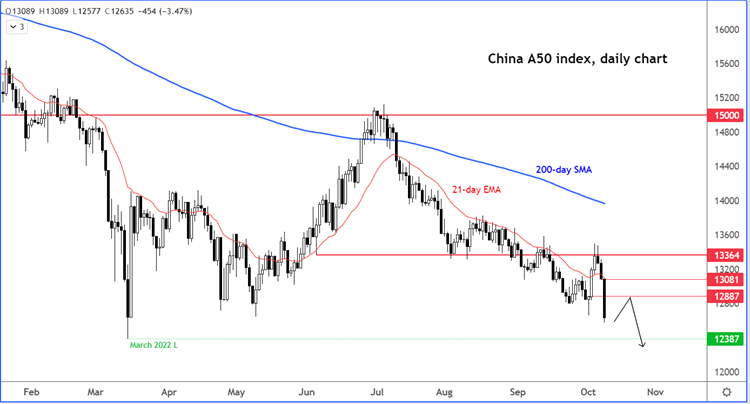 Concerns about the health of the Chinese economy, the world’s second largest, is growing.

You might have missed a really weak Caixin Services PMI number that was released over the weekend. It came in at 49.3, more than 5 points lower than expected (54.5) and last month’s print of 55.0. This was reflected in a sharp cut back by Chinese holidaymakers on travel and spending during the National Day breaks last week.

It is clear that China is struggling. The economy needs fresh measures to stimulate domestic spending. However, the government’s strict Covid curbs are still there despite the rest of the world moving on and learning to live with the virus.

Until something changes fundamentally, the Chinese yuan is likely to remain undermined.

Dollar strength continues ahead of key US data

Meanwhile the case for an even stronger dollar continues, after Friday’s publication of a stronger US jobs report gave investors more reason to believe the Fed will continue its aggressive rate increases in order to create a soft landing in the economy to help bring inflation to more acceptable levels.

Speaking of inflation, the latest US Consumer Price Index (CPI) data will be published on Thursday. With the jobs market remaining strong, it is unlikely that the Fed will ease off the gas any time soon with inflation coming down only a little bit over the past couple of months. A lot will depend very much on incoming inflation data in the months ahead now. Annual CPI has fallen from 9.1% in June to 8.5% in July and 8.3% in August, thus remaining quite high. Expectations are that it probably drifted further lower to 8.1% last month. Risk assets will probably like a print well below that, otherwise expect dollar to remain supported on anything else.

We will also have other macro pointers from the US to look forward to this week, not least retail sales on Friday. Soaring inflation is expected to keep consumer spending in check. Thus, retail sales should have remained subdued in September after stagnating in the previous two months. If it turns out to be very poor, then this may give rise to the “Fed pivot” trade again and weigh on USD. Otherwise, it will be status quo.

Ahead of this week’s US data releases, the USD/CHN has found renewed buying interest, thanks in part to the weakness in Chinese data. This pair is thus likely to remain supported on the dips. Everything else being equal, I think the USD/CNH pair is heading for a breakout above this year’s high so far of 7.267. 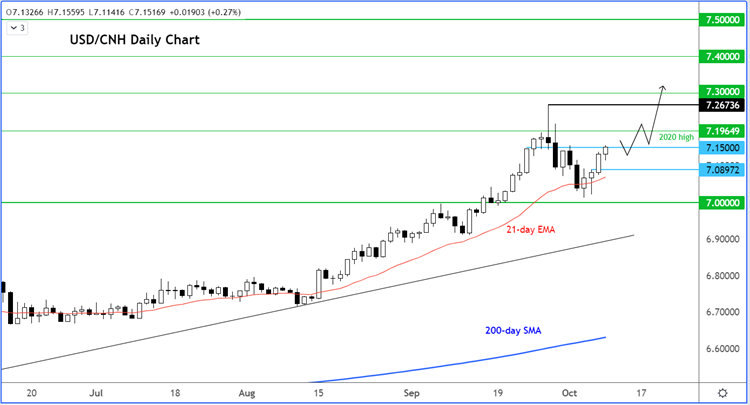