Canada’s August CPI released earlier today was 7% YoY vs an estimate of 7.3% YoY and a July reading of 7.6% YoY.  This was the lowest reading since April after CPI peaked in June at 8.1%.  The core CPI print was 5.8% YoY vs an expectation of 6.2% YoY and a prior reading of 6.1% YoY. This was also the lowest reading since April after peaking in June at 6.2% YoY.  Does this mean that the Bank of Canada’s rate hikes are working?  After the July meeting in which the BOC surprised markets by hiking rates 100bps, it followed up with another 75bps hike at the September meeting.  That adds up to a 1.75% increase in the overnight rate in two months, bringing the current rate to 3.25%! This is the highest level since 2008! However, although the exceptional rate hikes may be working to bring down inflation, the BOC must be careful as the Canadian economy has lost 113,500 jobs over the last 3 months, with an Unemployment Rate at 5.4%, its highest level in 7 months.

Yesterday we looked at the USD/CAD from a weekly timeframe and noted all the potential resistance above. On a daily timeframe, we pointed out the inverted hammer.  However, with today’s weaker CPI data from Canada, there has been no follow through on the downside…yet.  The pair still must get through tomorrow’s FOMC meeting, which should set the tone for US Dollar pairs.

As for EUR/CAD, prices have been moving lower since July 21st, 2020 when they peaked at 1.5979.  However, the momentum picked up steam after price broke below 1.4100 on March 2nd as it became apparent that the BOC would hike rates at a faster rate than the ECB.  EUR/CAD began moving in a downward sloping channel and reached its lowest level since 2013 on August 25th at 1.2877, which was also the bottom trendline of the channel.  Since then, EUR/CAD has bounced and is currently testing the top trendline of the channel and horizontal resistance near 1.3300. On a 240-minute timeframe, EUR/CAD appears that it may be trying to carve out an Inverted Head and Shoulders pattern.  The target for this pattern is the height from the neckline to the head, added to the breakout point.  In this case the target is near 1.3660.  However, if price is to reach the target, it must first pass through horizontal resistance at 1.3390 and then the 38.2% Fibonacci retracement level from the highs of December 20th, 2021 to the lows of August 15th at 1.3553.  Above there, horizontal resistance crosses at 1.3711.  However, it this proves to be a false breakout above the channel, horizontal support crosses at 1.3292, then the lows from September 6th at 1.2979.  Below there, EUR/CAD can move to the lows of August 25th at 1.2857. 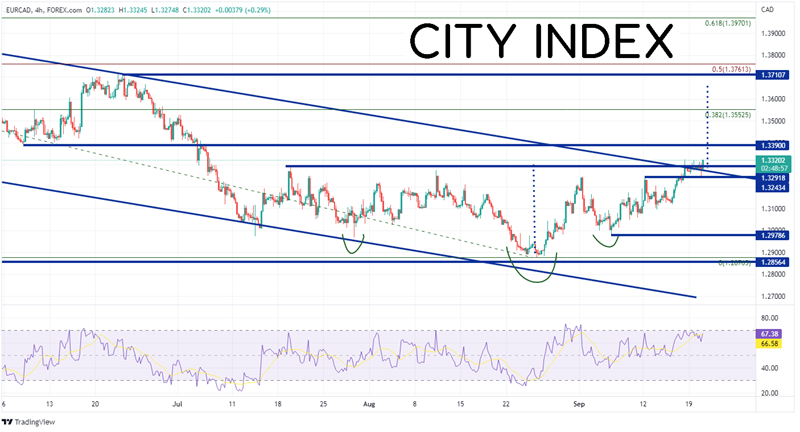 CPI for August out of Canada was lower than expected.  As a result, EUR/CAD is trading higher on the day.  Will the pair continue to move higher?  It may depend on the September Employment Change for Canada on October 7th.  If the employment data continues to worsen, the BOC may be forced to lower the pace of interest rate increases, which could give a lift to the Canadian Dollar.