Wednesday’s publication of UK consumer inflation data is eagerly anticipated by traders. It is expected to reveal accelerating price pressures, in line with the recent trend. If the data turns out to be hotter than expected, this could increase the likelihood of faster tightening from the Bank of England, which in turn could negatively impact shares of UK retailers and the FTSE. The impact on the pound is not going to be a straight-forward one since there are both inflationary and growth concerns when it comes to very high levels of inflation.

What are analyst expectations about UK CPI?

After rising 9% in April, annual CPI in May is expected to have accelerated a tad more to 9.1% in May from the same period a year earlier. Core CPI is seen eased back slightly to 6.0% in May after printing 6.2% in April.

In April, the rate of inflation at 9% was the highest since 1982. It was boosted by rising prices of electricity, gas and petrol. Second-hand cars saw their prices rise, suggesting consumers were in no mood to splash the cash on expensive new cars. The cost of housing rose nearly 20% in April compared to a year-ago period. In short, almost everything went up.

On Wednesday, we will find out if this trend continued in May. The data is due at 07:00 BST.

Why is inflation so hot?

Inflation has become a big problem for the UK – and the rest of the world. It is going to influence government and central bank policies for months and possibly years to come. Inflation was very low and stable for many years before the pandemic – and Russia’s war in Ukraine. The pandemic itself was not necessarily inflationary, but the big fiscal and monetary stimulus measures that were unveiled by western governments – not least the US – in response, added to an already-ballooning supply of money. All that money chasing too few goods and services meant prices of everything had to go up. Russia’s invasion of Ukraine exacerbated the supply-chain problems that were there since the height of the pandemic, but it was by no means the only reason for the global inflation overshoot.

There are many problems with inflation being too high, which is why the Bank of England and other global central banks have been tasked by governments to prevent this situation by having the independence to tighten monetary policy when required. Unfortunately, the BoE and other central banks have left it far too late before acting. Now they are panicking as inflation continues to roar higher.

How will the pound react?

Inflation being this high is negatively impacting growth as consumers’ disposable incomes and company margins have been slashed because the price of everything has gone up. Central banks have to be careful not to tip their respective economies into a recession.

This bring me back to the point I made earlier about the pound’s response to the inflation data. If it comes in too hot, the BoE’s response will have to be to tighten more aggressively, which, in turn, may mean it will shorten the time before the UK falls into a recession …which will then require the BoE to eventually loosen its policy quicker than would otherwise be the case.

In fact, the UK economy has – at best – stagnated since the turn of the year, while inflation has kept on rising. No surprises, therefore, that the pound has fallen to $1.20 handle.

Another reason why another potential overshoot in inflation will not necessarily lead to a recovery in the pound is that the Bank of England has already lifted expectations that annual inflation in the UK will rise further, potentially reaching 11% in October.

So, paradoxically, the GBP/USD might actually find support if inflation data comes in significantly weaker. But in any case, key resistance and bearish trend line circa 1.2450 must be broken if we are to see any sustained move higher, in what still is a bearish trend:

How will CPI impact the FTSE?

I think a more straight-forward reaction might be in the FTSE than the pound, for a change. If inflation data comes in hotter-than-expected, then UK stocks such as retailers could suffer on fears consumers had lower disposable incomes for shopping of non-essential items in May. Meanwhile, companies themselves might have paid more for their input costs, denting their profit margins further.

In other words, the FTSE could weaken on a strong CPI print, especially as it has now reached a potential resistance area circa after a two-day counter-trend move: 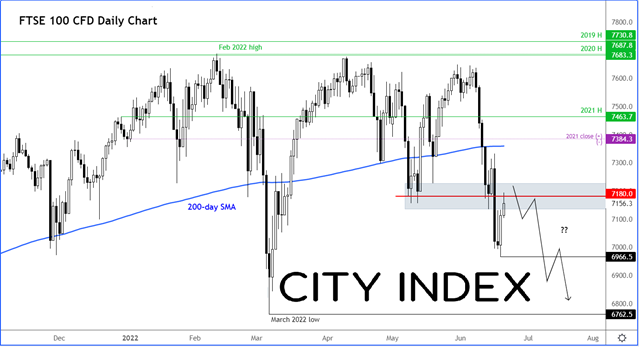 Beyond the initial response to the CPI data, the FTSE’s subsequent direction will be determined by global macro events and the general direction of stock market. Until now, resistances have held and supports have continually broken down. Given that not a lot has changed or about to, the path of least resistance continues to be to the downside for the FTSE and other global indices.