The National Bank of Poland (NBP) hiked rates by 100bps today to 4.5% vs an expectation of only a 50bps hike.  It was the 7th rate hike in a row since raising from record low levels of 0.1% as late as September 2021.  It is also the highest level since November 2012!  The central bank is looking to stem rapidly rising inflation, most notably from energy and raw materials, due to the Russia/Ukraine war.  On April 1st, Poland released its March preliminary reading for CPI.  The print was 10.9% vs an expectation of 10.1% and a February reading of 8.6%.  This was the highest CPI reading for Poland since July 2000.

USD/PLN made new all-time highs at 4.6199 shortly after the Russian invasion of Ukraine. Recall that USD/PLN and USD/RUB have a strong correlation.  The current correlation coefficient between the 2 pairs is +0.83.  Readings above +0.80 are considered strong.  Therefore, as USD/RUB moves in one direction, so does USD/PLN.  However, whereas USD/RUB has retraced its entire move since the day of the invasion, USD/PLN has not.  After retracing to the 61.8% Fibonacci retracement level from the lows of February 10th to the all-time highs near 4.1832, USD/PLN has bounced. 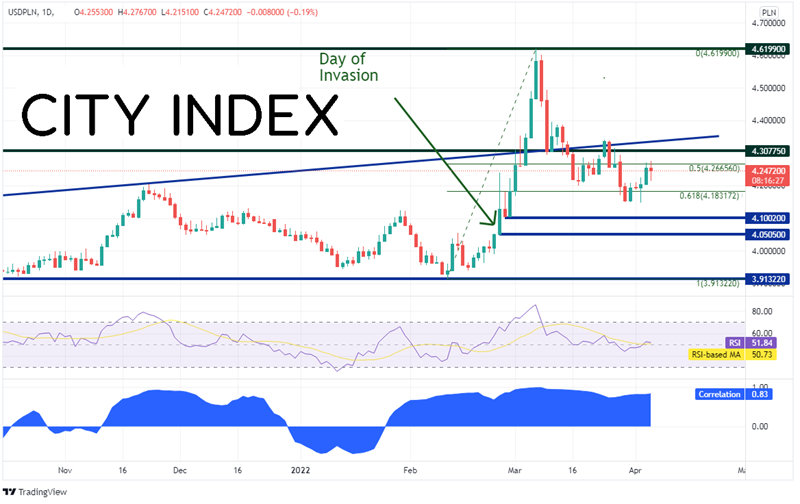 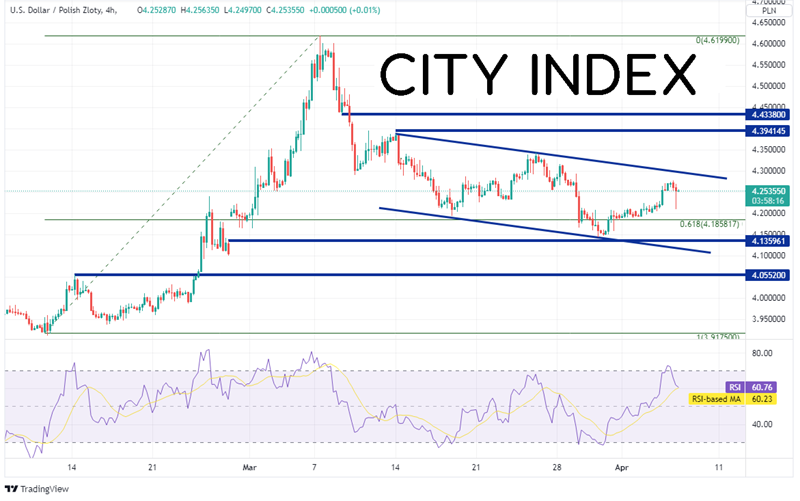 After the NBP hiked rates by 100bps today, USD/PLN is trading in the middle of the downward sloping channel on the 240-minute chart.  However, despite the rate hike and due to the strong correlation, traders may have to look at USD/RUB in order to determine the next direction of USD/PLN.