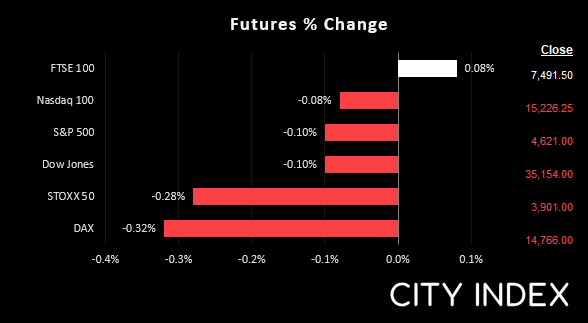 Asian markets were mostly higher overnight as they tracked the moves from Europe and the US. Japan’s share markets were in the red and the Nikkei 225 fell back to its 200-day eMA, after being unable to crack trend resistance on the daily chart. Futures markets are a touch lower ahead if the open, which is no surprise given their rally of late.

The Australian dollar is the leader of the pack, up 3.7% against the dollar compared with 2.9% for NZD and 1.5% on CAD. The Japanese yen was the strongest currency today, rising around 0.9% against the US dollar and helping USD/JPY pull back from arguably over-extended highs. Most of its gains were seen earlier into the session heading into the Tokyo fix, just one day ahead of the end of financial year for Japan. The yen also rose around 0.5-0.6% against commodity currencies. The US dollar extended yesterday’s losses slightly, as it seemingly lost its safe-haven appeal due to the peace talks. Outside the yen, volatility was capped with a lack of economic news released during the Asian session.

USD/JPY is currently flat for the week 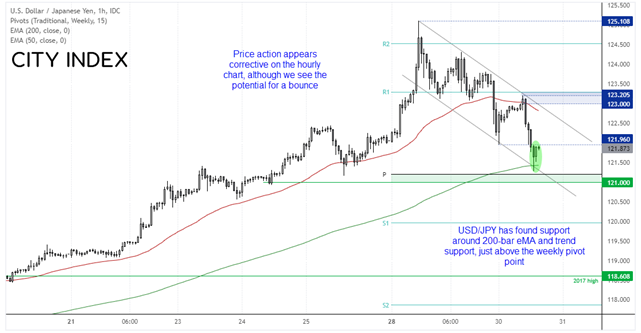 Despite its most volatile week since the pandemic, USD/JPY is effectively flat for the week and on track for a bearish pinbar. However, due to month and quarter-end flows, there’s a decent chance of volatility heading into Friday’s close.

It’s now within its second retracement day although today’s low stopped short of testing 121.0. Dare we say the low could be in for the day? Price action on the hourly chart appears to be corrective in nature, and the market is trying to form a base around the 200-bar eMA and monthly pivot point, within its bearish channel. Should it rebound then the upper trendline or area around 122.50 could targeted. A break above 122 could be taken as an early sign of a recovery (or at least a counter trend bounce over the near-term).

Preliminary CPI data for Germany is at 12:00. The usual culprits were behind the rise in February, including supply chain bottlenecks and energy, and we’re not expecting those forces to simply disappear since this month’s report has to factor in the war in Ukraine.

Final reads for GDP, which includes the Core PCE read are released at 12:30 GMT. They’re unlikely to create the volatility generated from the initial report, unless we see (by some magic) that core PCE has dropped surprisingly. 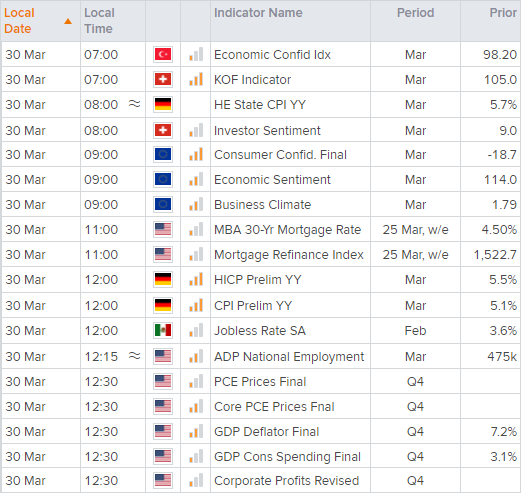