ECB Preview: All about forward guidance

The European Central Bank is set to hike interest rates by 50 basis points on Thursday, lifting the Main Refinancing Rate to 3.0% from 2.5% currently. While this is fully priced in, there’s still a lot of uncertainty in terms of forward guidance, which is what will ultimately determine how the markets react on Thursday. Complicating the market reaction is the fact that the Federal Reserve’s rate decision is due to take place first, on Wednesday. It is possible that the Fed may rock the markets with its own announcement. Even so, the ECB’s decision should still lead to at least some short-term volatility and therefore potential trading opportunities.

Ahead of the ECB’s rate decision, we have had some mixed bag Eurozone data this week, which has made the Governing Council’s job even more difficult.

The surprise acceleration in Spanish inflation to 5.8% from 5.7% has reinforced expectations of multiple 50 bps hikes by the ECB. On top of this, the latest GDP data in France, Spain, Italy and Eurozone all beat expectations. A recession was again avoided in the Eurozone.

However, German data has been particularly bad of late. Last week, we saw the latest PMIs come mostly ahead of expectations for the Eurozone, but the key German manufacturing sector PMI disappointed at 47.0 vs. 48.0 expected. What’s more, the German GfK Consumer Climate index remained deep in the negative at -33.9 vs. -37.6 in December. On top of this, the Eurozone’s economic powerhouse unexpectedly recorded negative growth (-0.2%) in the fourth quarter and suffered a 5.3% slump in retail sales in the month of December.

Given the recent weak indicators from Germany, it looks like growth at the Eurozone’s largest economy has weakened again, which could be an indication for what’s to come in the early parts of this year. As a result, the ECB will not want to be too aggressive in its forward guidance, especially as other central banks have now either slowed the pace of tightening or paused it. That said, given that inflation remains very high here compared to the US, the ECB is going to tighten its policy at least a couple of more times before pausing. This should help provide support for the euro on the dips.

How will the markets react to the ECB decision?

So, the interest rate decision should be a straight-forward 50 basis point hike. Let’s take a look at various scenarios insofar as the forward guidance is concerned.

Investors will want to know whether the ECB is going to fully commit itself to another 50-bps hike in March and at its next meeting. 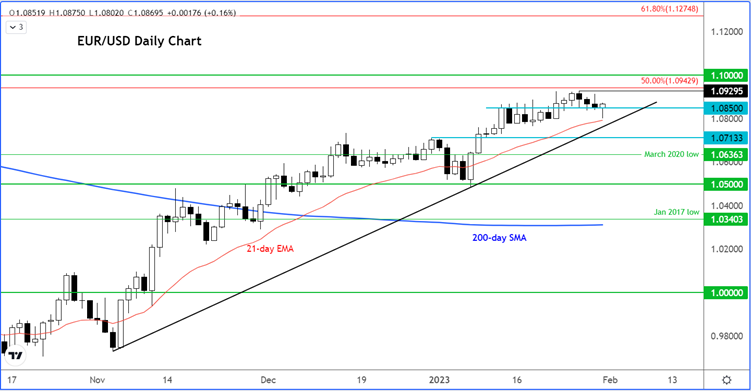