The US Dollar Index had a tough time trading through the 161.8% Fibonacci extension from the highs of April 28th to the lows of May 5th, near 104.90,  as sellers entered the market and have been pushing DXY lower over the last 3 days (including today). The next horizontal resistance level above there is from a spike low in 2002 at 105.41.  First support is at the May 5th lows near 102.35.  Below there is horizontal support at the highs of April 19th near 101.00, just ahead of the 50 Day Moving Average at 100.71. 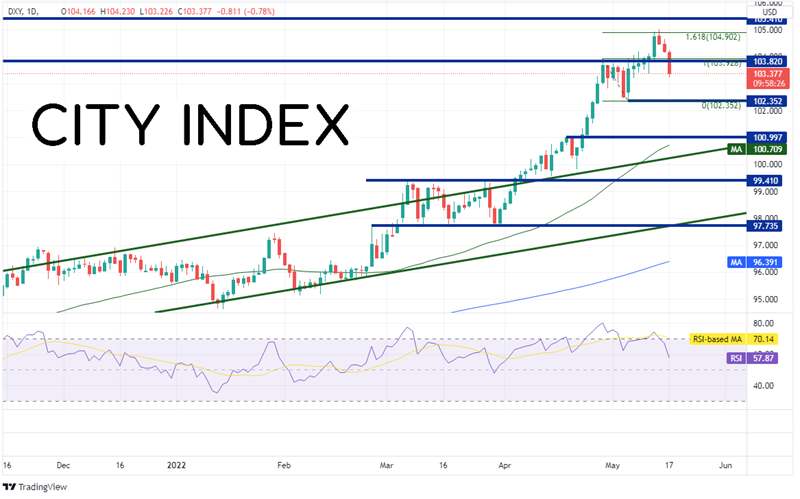 The pair has been moving lower for months.  The selloff became aggressive when EUR/USD formed a shooting star candlestick on April 21st as price reached a daily high of 1.0936.  However, EUR/USD failed to close below the 161.8% Fibonacci extension from the lows of April 28th to the highs of May 5th, near 1.0365.  In addition, the pair failed to take out the lows of 2017 at 1.0340, which now acts as the first level of support.  Below there, EUR/USD has room to fall to the psychological round number support level at parity (1.0000).  Resistance is at the highs from May 5th at 1.0642 (which confluences with the March 2020 pandemic lows of 1.0635).  The next level of resistance is the bottom, downward sloping trendline from the long-term channel near 1.0690 and then the 50 Day Moving Average at 1.0804.

Never underestimate the American consumer!  Retail Sales continued to be strong in April despite high inflation. Is this just a correction at key levels for the DXY and EUR/USD or will they continue moving in their longer-term trends?  Markets may learn more when Powell speaks later today.