Markets pricing in central bank rate increases over the next year

As inflation continues to rise around the globe, central banks are trying to combat rising prices by ending their respective asset purchase programs and by increasing interest rates.  Most of the major central banks have ended their Quantitative Easing programs, with the exception of the ECB and the BOJ (however the ECB is expected to end it very soon).  That leaves raising interest rates as the primary tool for combating inflation.

The chart below shows where some of the major central banks currently have interest rates and where the markets expect them to be in one year. 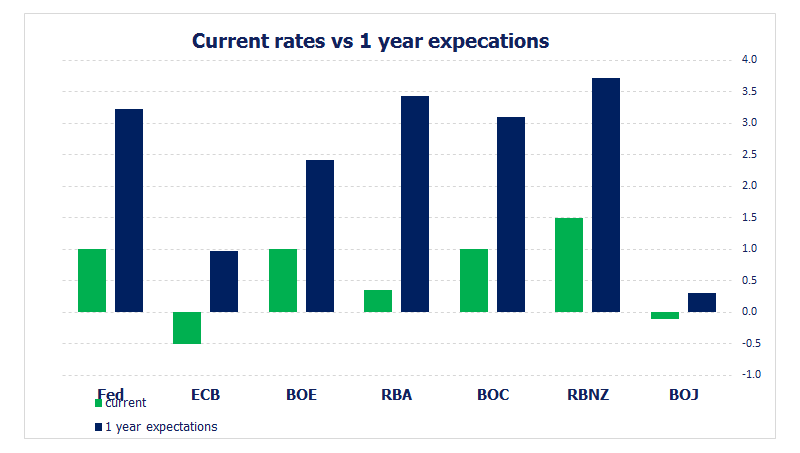 The ECB is the farthest behind in terms of raising rates at -0.50.  However, markets expect rates to be near 1.0% in 1-year.  With inflation in the Eurozone pushing 7.5% YoY, ECB members, including ECB President Christine Lagarde, have been on the wires the past few weeks discussing the possibility of hiking rates as soon as July.

The Bank of Japan also has ultra-low rates at -0.10, however markets only expect to see rates in Japan rise to 0.3% in 1-years’ time.  This is primarily due to the deflationary pressures that Japan has been facing.  Indeed, as part of the BOJ’s central bank QE, it continues to buy ETFs in the market and pegs the 10-year yield at 0.25%.  If yields rise to that level, the central bank will step in and buy JGBs to keep yields low.

Everything you need to know about the BOJ

The Fed currently has the Fed Funds rate at 1.0%.  However, markets are anticipating that the Fed will raise rates to 3.22% in 1 year.  With inflation near 40-year highs at 8.3% YoY, several Fed members have suggested that it they may have to raise rates above what the Fed considers neutral, roughly 2.5%, in order to bring inflation down.  It should be noted that the Fed targets 2% inflation, so there is a long way to go before inflation reaches the Fed’s target level.

The BOE currently has rates set at 1.0%.  Markets see rates rising to “only” 2.41% in 1-year.  Although inflation in the UK is high, as with other countries, the MPC is taking a more cautious approach.  The BOE knows it must raise rates to combat inflation, however at the same time the central bank is concerned about the effect inflation and rising interest rates will have on household incomes and growth.  Indeed, March’s GDP reading was -0.1%, suggesting that the BOE may be on to something!

Everything you need to know about the BOE

The BOC, RBA, and RBNZ are in similar situations.  Everyone is facing high inflation but is also concerned about slowing growth.  If one throws the recent lockdowns in China into the mix, there is even more of a chance of a global slowdown.

Traders should watch the change in expectations of rates vs current rates.  Since foreign exchange rates are affected by the difference between 2 countries interest rates, having an idea of where interest rates may be headed can be one tool investors can use to help determine where fx rates may be going next!