With all the talk lately about outcome of the elections, Sterling has gone bid vs many of the counter-currencies as it seems the outcome will be favorable to a Brexit deal.  While much of the currency talk has been centered around GBP/USD and EUR/GBP,  don’t forget Cable vs the Australian Dollar.  The Australia Dollar is very sensitive to the US-China trade war.  Aussie traders appear to be skeptical that a trade deal is “Done”, and it seems they are waiting for more details to come out before buying Aussie.  As a result, GBP/AUD is moving higher and could reach near 2.00, a level not seen since May 2016.

On a weekly chart, GBP/AUD has been trading in an upward sloping channel since October 2016.  The pair has retracement 50% of the selloff from the highs in August 2017 to the lows in October 2016.  The pair has room within the channel to push higher towards strong resistance between 1.9700 and 2.000, as the weekly RSI is not in overbought conditions. 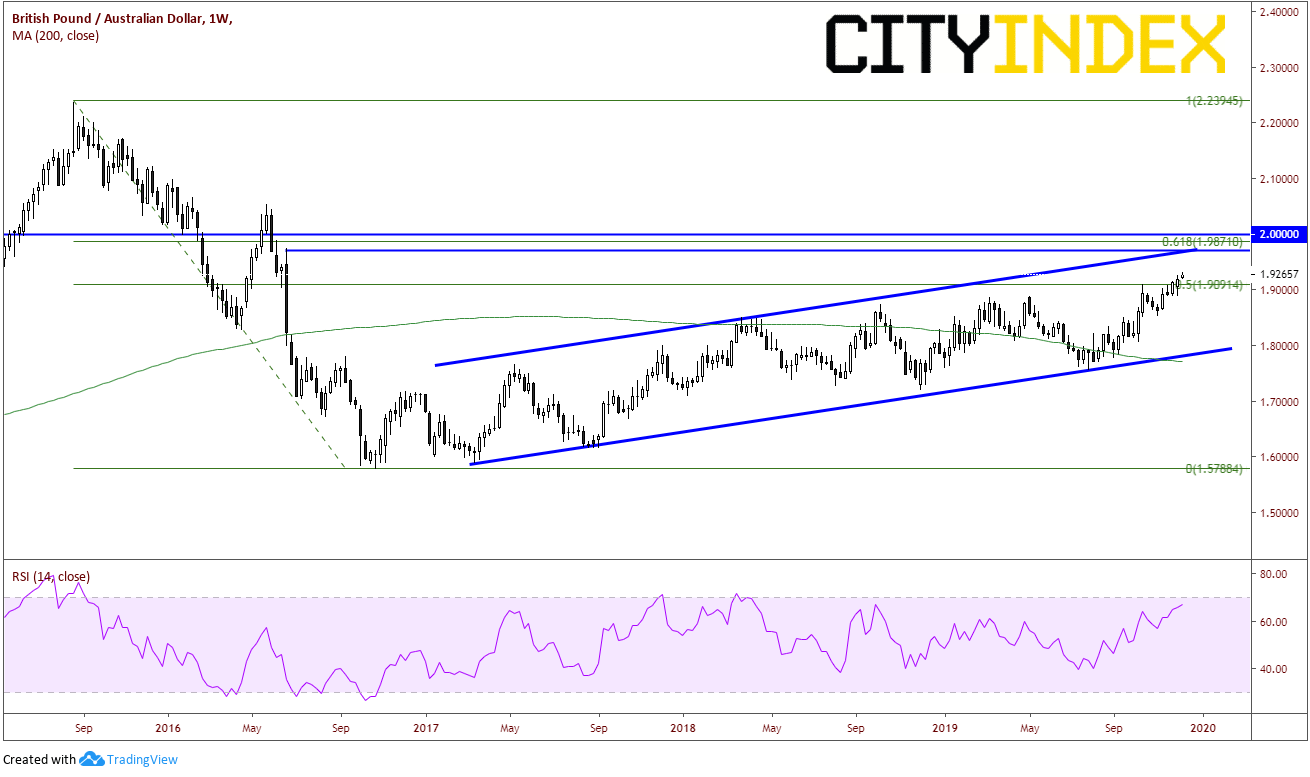 On a daily, the pair held the 50% retracement level from the lows of October 9th to the highs of October 16th, and its move higher.  We also can get a better view of the 1.97/2.00 resistance range.  1.9700 was near the highs on June 2016 and 2.000 has been a pivotal point heading back to early 2015 (see weekly).  In addition, within that zone of resistance is the 61.8% retracement level from the highs of August 2015 to the lows of October 2016.  The top long-term channel trendline also comes across near that level.  However, notice that the RSI is beginning to diverge with price, a sign that the pair may not move higher in a straight line. 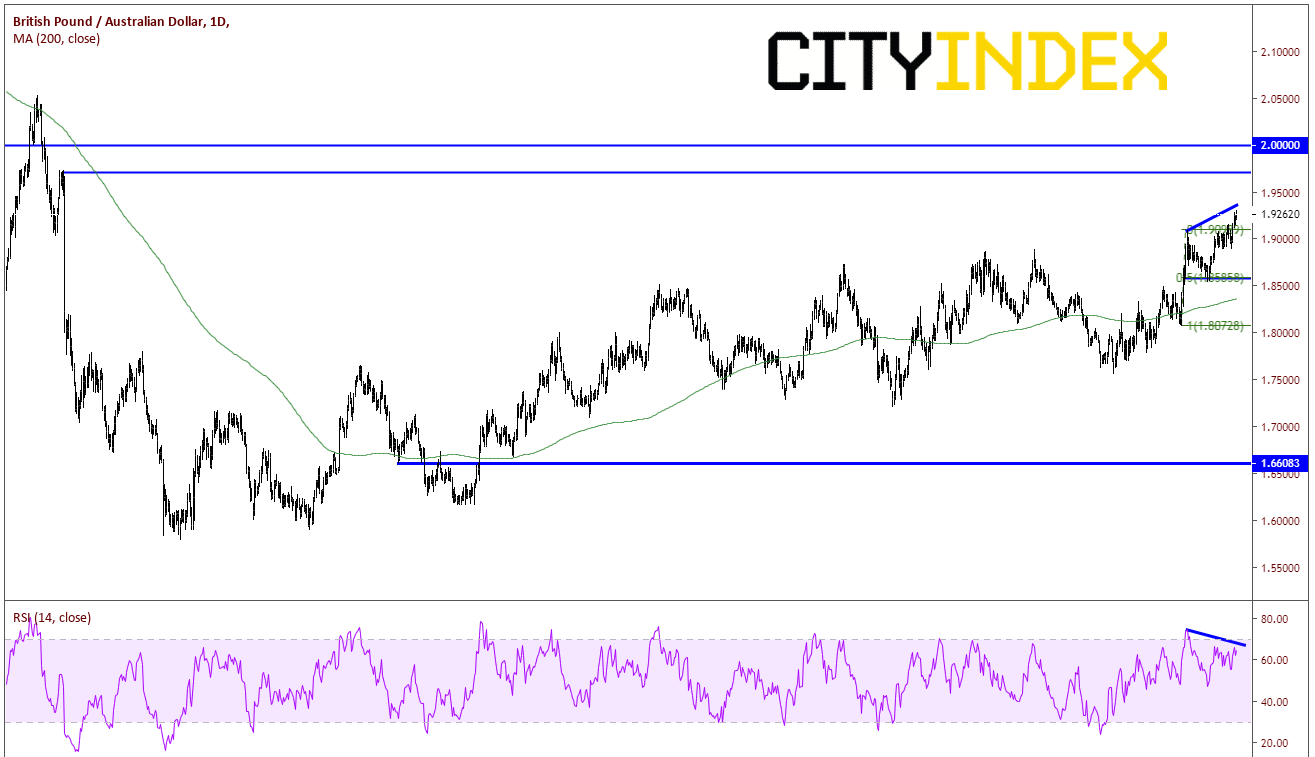 On a 240-minute chart, GBP/AUD formed a bullish pennant formation.  The target for a bullish pennant is the length of the flagpole for the pennant added to the point where price broke out of the pennant.  In this case, the target is right at the lower end of the resistance zone at 1.9702.  Once again, notice that the RSI is diverging with price, so GBP/AUD may get a pullback before moving higher.  The is also a small rising wedge which looks ready to break lower.  The target for a rising wedge is a 100% retracement of the wedge, which would be near 1.8900.  First support is recent lows from December 6th, near 1.9150 and below that price can move down to horizontal support near 1.9100. 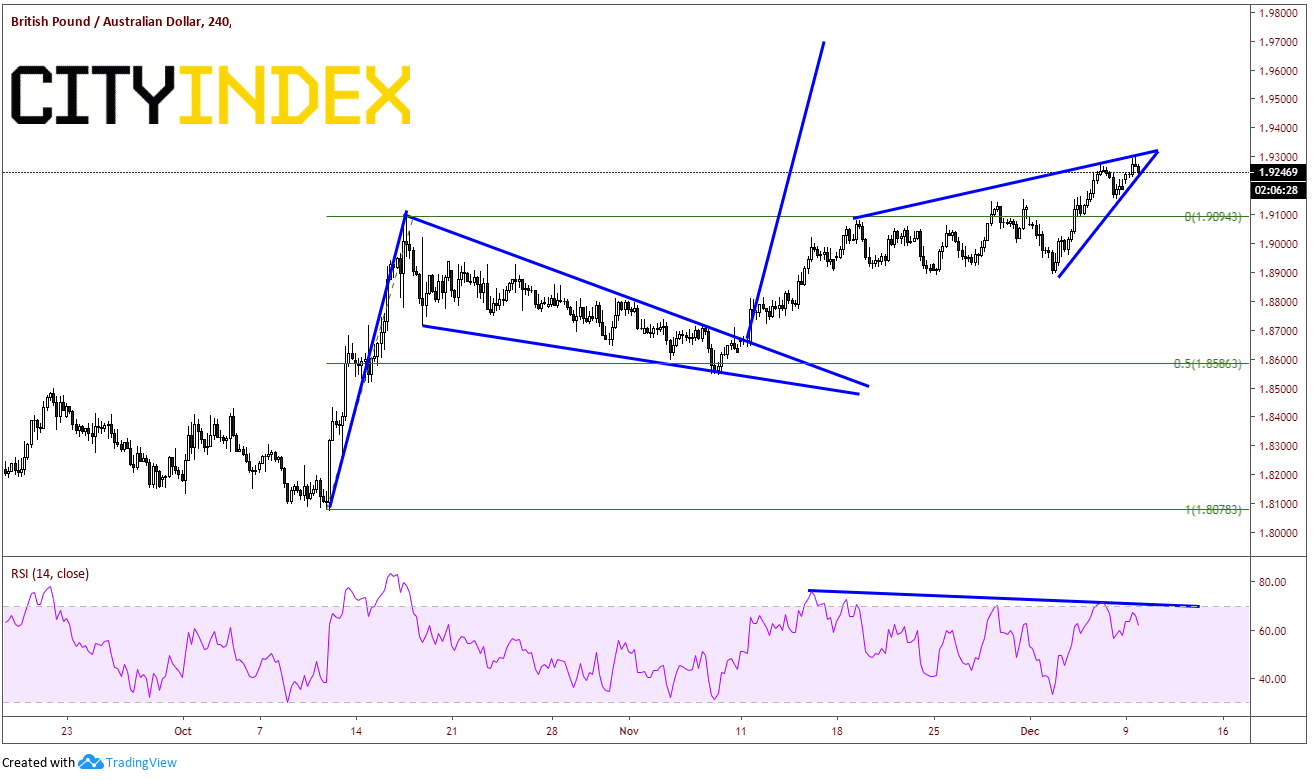 If Johnson wins the election and a majority, GBP/AUD could reach near 2.00 rather quickly.  However, most other scenarios will caution buying of Sterling, in general.  Also, if a US-China trade deal gets signed by the end of the week or if the December 15th tariffs get delayed, Aussie may go bid. This may result in the  pullback GBP/AUD needs in order to unwind the RSI before heading higher.

View more
Another US business sentiment report flashes red ahead of the ISM
OPEC preview: Will OPEC+ increase output in August?
Stocks struggle as yields recover
Currency Pair of the Week: EUR/USD
What you should know about the GlaxoSmithKline demerger
Bed Bath & Beyond Q1 preview: Where next for BBBY stock?