After a busy week for central bank meetings and sharp moves across financial markets, stock indices in Europe started the new week on a stronger footing this morning amid short covering and bargain hunting. But commodities painted a different picture. We saw Iron ore prices tumble overnight, while copper has extended its falls after dropping more than 6% on Friday. On Friday we also saw crude oil slump, with Brent shedding nearly 5% and WTI 6%. Both oil contracts have started the new week on the back foot, too. More losses could be on the way for commodities.

Demand concerns are on the rise because of growing expectations that the global economy is heading for a sharp slowdown in the coming months, with China – a major importer of commodities – being a major source for concern.

Without a doubt, demand for raw materials has dropped sharply because of troubles in China. Unlike the rest of the world, China, the world’s second largest economy, has been unable to put coronavirus behind it. As a result, it has been going into repeated lockdowns, which has had ramifications in all areas of its economy, not least the property market. This is reducing demand for metals such as copper and iron, used in the construction industry.

Globally, consumers’ disposable incomes have fallen sharply because of the big rise in inflation, hurting some emerging markets particularly badly. It is possible that the slowdown will be more severe than expected, and that’s what investors are worried about the most. If you look at recent price action across asset classes – from stocks to cryptos – they are all pointing to the same thing.

Brent crude oil has now reached a potential support area near $110 handle, which is where the long-term trend line comes into place: 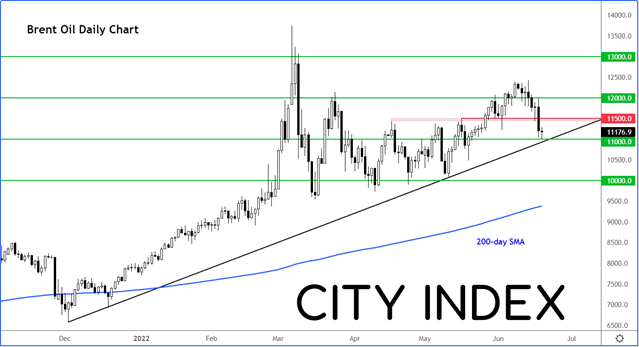 So, a small bounce here may not come as major surprise. But if the trend breaks then we may see a sharp move down to $105 initially ahead of $100 thereafter.

Copper has now reached below $4.00 and thus created a new lower low: 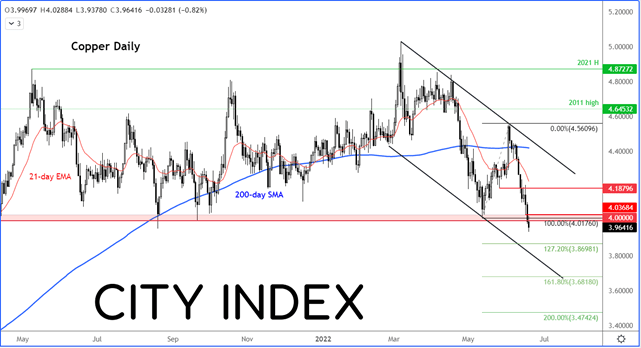 Copper remains inside a bearish channel, so we are continuing to look to fade rallies into resistance and expect support levels to break down. The Fibonacci extension levels shown on the chart could be the next downside objective for the bears.

You can trade with City Index by following these four easy steps:
Open an account, or log in if you’re already a customer
Search for the company you want to trade in our award-winning platform
Choose your position and size, and your stop and limit levels
Place the trade
Related tags: Commodities Trade Ideas Copper Crude Oil