The NFP report could grow in significance again

We’ve seen cracks appearing in the US economy in recent months. So now they’re making their way over to employment reports it puts NFP on high alert for weakness.

Quite rightly, inflation has been a core focus for central banks and will continue to do so over the foreseeable future. But with so many leading indicators pointing towards an economic slowdown, doomsayers will be keeping a close eye on coincident and lagging indicators (such as employment) to confirm their grim views.

Markets have been feverishly pricing in a recession as leading indicators point south of lose steam. The housing sector has been ringing alarm bells with building permits, housing starts and builders confidence plunging as interest rates rise.

Leading indicators have been ringing alarm bells for the US economy

Regional PMI have deteriorated ahead of the ISM manufacturing and services PMI, which sit at their slowest rates of expansion since June and May 2020 respectively. (New orders for manufacturing also contracted for the first time in 2-years). The Sales Managers Index contracted in June which points to a recession, and consumer confidence hit a record low according to the University of Michigan Survey.

Cracks are also appearing in the employment situation for the US

As my colleague Fawad points out, today’s NFP print is unlikely to deter the Fed from a 75-bps hike this month. But when the precious NFP numbers begin to crumble, so does the Fed’s argument that the US economy is robust. And we’re seeing early signs of that across multiple employment metrics. 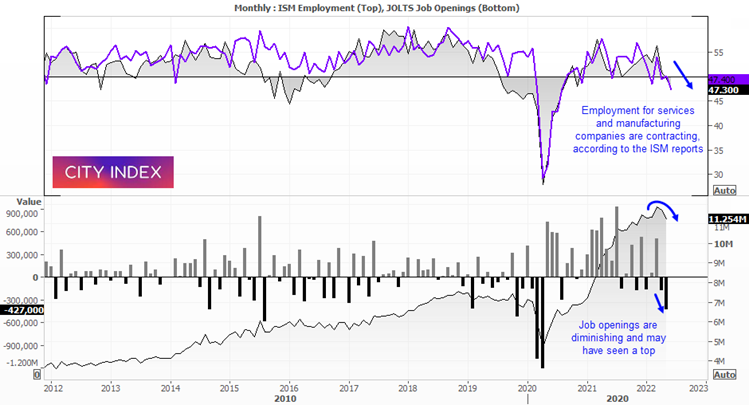 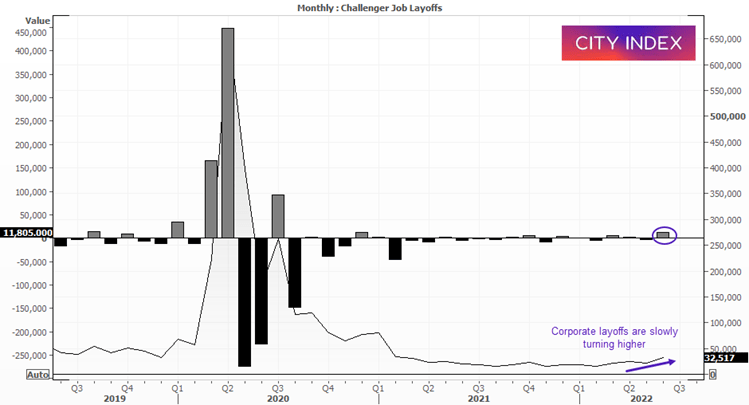 Fear not, a recession could be coming

As NFP is actually a lagging report, it will be one of the last to follow the leading indicators lower. And when we do see unemployment begin to rise and headline employment growth lose momentum it will be hard for the Fed to ignore. And that could provide a reason for the Fed to at least pause their hiking cycle, because a crumbling jobs market is great for deflation. So that still leaves room for a decent NFP today, but is a report I suspect will grow in significance in the coming moths. 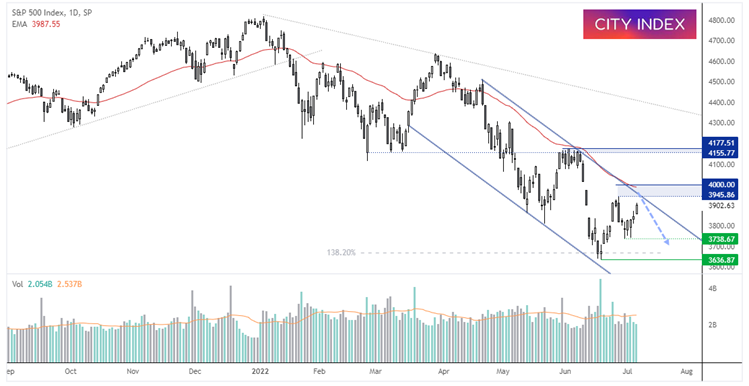 I’ve seen a few headlines regarding Wal Street’s fourth consecutive day higher, but I’m less impressed. Upside volatility does not exactly scream ‘risk-on’ and volumes have declined whilst prices have risen, which suggests the move higher is not due to initiative buying – but profit taking.

Furthermore, the index remains in a bearish channel, and this could simply be the third wave of a 3-wave correction. Therefore I would consider bearish setups below 4,000 or the bearish trendline – whichever shows a bearish reversal pattern first.