Tencent Holdings LTD is down nearly 20% over the last 2 days as Chinese Banking officials are set to pass down a record fine worth “hundreds of millions of Yuan”.  According to the Wall Street Journal, the company faces violations related to its WeChat Pay mobile network, as the firm is said to have failed to comply with regulations regarding Know Your Customer and Know Your Business.  In addition, the firm is also being hit with penalties for failing to regulate transfers of illicit funds and money laundering, such as for transactions related to gambling.  Until now, the large tech company had escaped the big crackdown on tech firms by Chinese authorities.  It should also be noted that the stock has been dragged lower by the overall performance of the Hang Seng in general, which is down 20% in the last 11 trading days.

What is a stock market crash?

Tencent made an all-time high on February 18th, 2021 at 772.50 and has been moving lower since.  The stock attempted a rally in May 2021 but failed, thus falling through the neckline and creating a head and shoulders pattern.  The target for the pattern is the height from the head to the neckline, added to the breakdown point at the neckline.  In this case the target was near 330. The target was finally reached yesterday.  The stock price also fell through horizontal support (lows of March 2020) at 323.  Notice the RSI is extremely oversold at 12.03, an indication that price may be ready for a bounce. 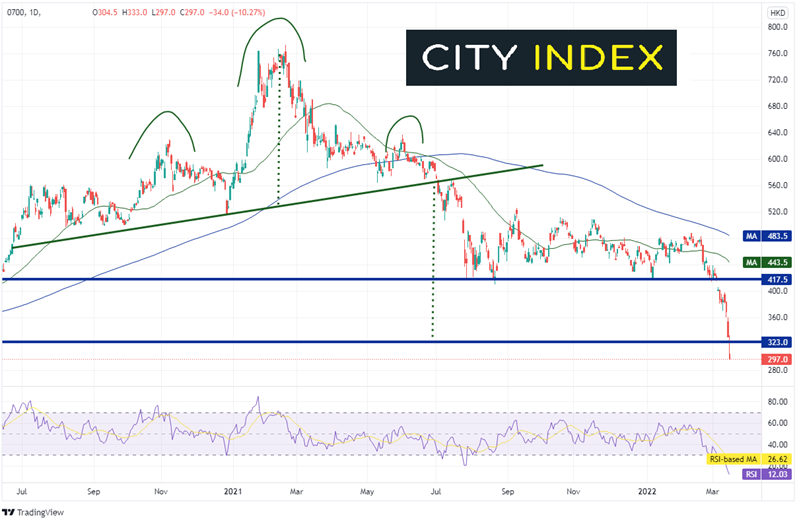 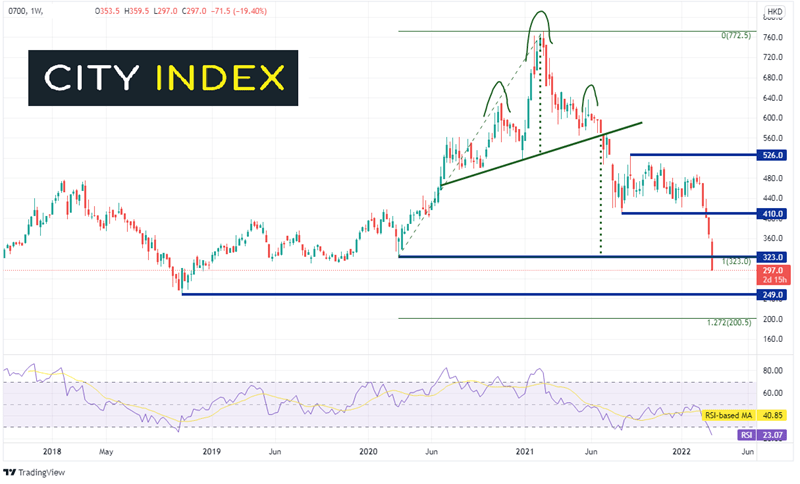 Tencent Holdings had been moving lower before this week, as it was falling with the Hang Seng.  However, record fines for failure to follow regulations helped Tencent to underperform the stock index.  Given that it has fallen so far, so fast, along with the extremely oversold RSI indications,  it’s possible that the stock may be ready for a near term bounce!