Index in Focus: China A50

The news out of China lately hasn’t been great.  China’s Caixin Manufacturing PMI released earlier today for August was 49.5 vs 50.2 expected and 50.4 in July.  This is the lowest level since May and puts the Chinese economy under the 50 expansion/contraction level.  Major reasons for the lower print include power outages and the ongoing closing and opening of cities due to Covid.  Speaking of Covid, China has placed its 4th largest city, Chengdu, under lockdown.  This region accounts for 1.75% of the country’s GDP.  In addition, parts of China’s largest tech hub, Shenzhen, had several areas placed under lockdown.  To make matters worse, the US has ordered Nvidia and AMD to halt sending AI chips to China and Russia.  This all comes on the heels of poor economic data, including Industrial Production and Retail Sales.  In addition, China’s housing sector has been plummeting due to failing property developers.  Can the China A50 recover as it approaches its May lows?

The China A50 had been moving in a symmetrical triangle since mid-June 2015.  However, on July 3rd, 2020, the index busted through the top of the wedge near 14700 and by February 18th, 2021, it reached an all-time high of 20603.10!  Since then, the index has been moving lower, as concerns of inflation, an economic slowdown, and an increase of Covid cases began to move through China. Price tested the previously mentioned top trendline of the long-term triangle numerous times, only to finally come crashing through it on March 7th, 2022. Since May 2021, the China A50 has also been moving lower in a downward sloping channel, reaching a near-term low of 13186 in mid-March of this year. 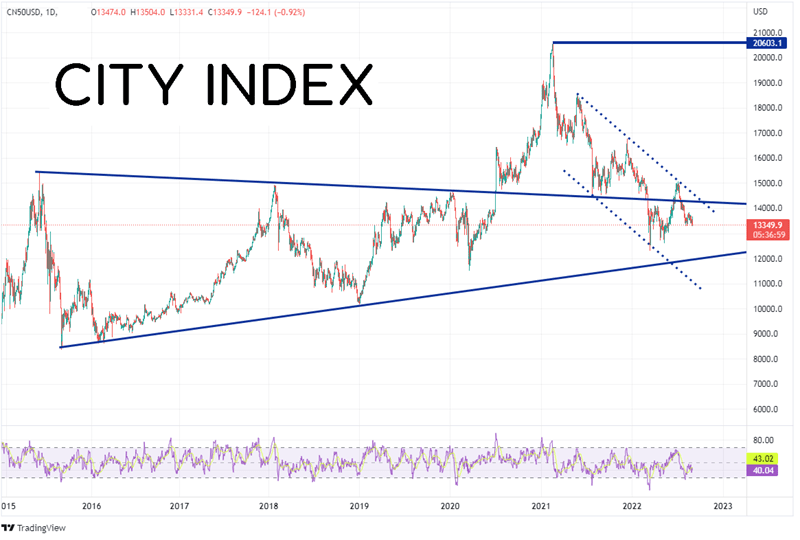 Trade the China A50 now: Login or Open a new account!

On a 240-minute timeframe, the China A50 is trading near the 61.8% Fibonacci retracement level from the lows of March 15th to the highs of July 5th, near 13354.  If price breaks, the next level of horizontal support is at 12611, and then the lows of March 15th at 12288.  Below there, price can fall to the bottom trendline of the long-term triangle near 11800.  However, if the support holds and price bounces, first resistance is at highs from August 15th at 12766.6.  Above there, resistance is at the top trendline of the previously mentioned long term triangle near 14270 and then the top, downward sloping trendline from the channel near 14690. 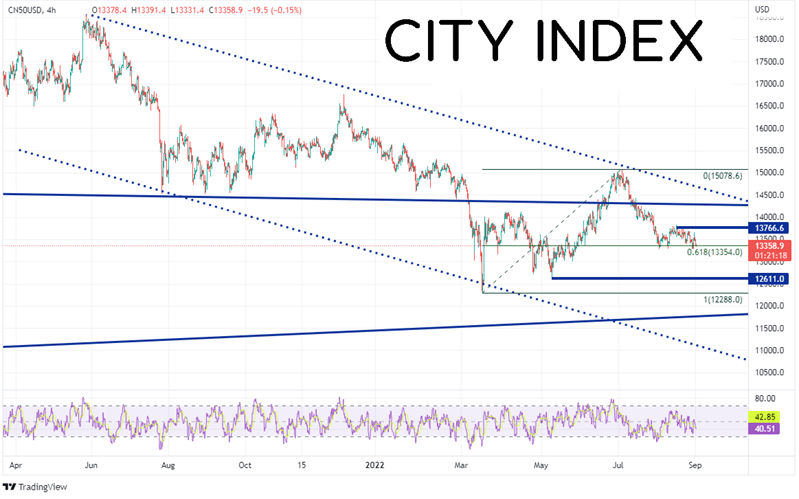 Poor economic data combined with the constant closing and re-opening of certain areas in China have the China A50 on its heels.  Will the Index continue to move lower?  The 61.8% Fibonacci retracement level from March 15th to July 5th may be the key level to watch!