The GBP/USD is one of the more interesting pairs to watch this week after the Bank of England’s rate decision was perceived to be dovish by markets, while the Fed was deemed to be more hawkish than expected.

The split among the MPC gave rise to speculation that the rate increases might stop sooner than expected as high inflation in the UK continues to hurt pockets of consumers and weigh on business activity. The ongoing industrial actions across the UK are likely to hurt the economy further.

Across the Atlantic, the Fed signalled that it wants to hike rates further so that the terminal rate is above 5% and keep it there until it is convinced that inflation is on a sustainable downward path towards its 2% target.

Thus, it is likely in my view that the GBP/USD could be heading lower again, possibly below $1.20 in the days and weeks ahead.

Following last week’s central bank bonanza, the GBP/USD fell about 1% on the week, although from the high of the week, the selling was more pronounced – a good 2.4% or a 300-pip drop. The resulting weekly candle was a bearish-looking inverted hammer (see inset on the daily chart). Given that this potential reversal has taken place around the 50% retracement level of the entire downswing from the 2021 high, it may prove to be a significant bearish development in the weeks ahead. 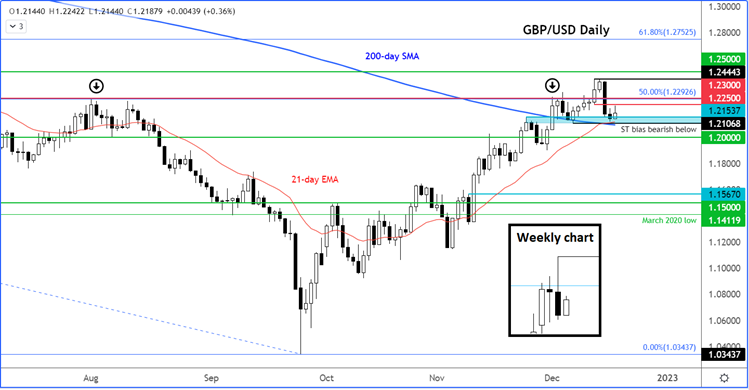 The bears will clearly want to see the cable hold below the 1.23 handle going forward. There will be a lot of trapped long traders whose stops might be resting below last week’s range. Given the shape of this pattern, I wouldn’t be surprised if the GBP/USD drops to take out those orders, despite the cable starting the week on the front-foot.

On the daily time frame, the area around 1.2100 had been support in the past, where we also have the 200-day average converging. A potential break below this area would drive the cable back below the 200-day, which would be another bearish development in and of itself.

Let’s see if that happens now and whether we will see acceptance below it. If so, we should then see some follow-up technical selling towards and potentially below the 1.20 handle next.